It’ll take many more sell-offs and the collapse of many more iffy stocks before this hyper-enthusiasm, after nine years of central bank nurturing, is finally wrung out of the market.

Shares of “blockchain” company LongFin (LFIN) plunged 17% today to $14.31, the sixth trading day in a row of plunges. Intraday on Friday, March 23, shares still traded at $73. The astonishing thing isn’t that they’ve plunged 81% over those six trading days, but that they had more than doubled over the prior two weeks, and that they’re still trading above penny-stock status to begin with.

LFIN started trading on December 13, following their IPO. On December 15, LongFin announced – with what I called it “a mix of gobbledygook, hype, and silliness” – that it had acquired a “Blockchain-empowered solutions provider,” namely a website that belonged to a Singapore corporation that is 95% owned by Longfin’s CEO and chairman.

Though neither the announcement nor the transaction passed the smell-test, shares skyrocketed 2,700% to an intraday high of $142.55 on December 18, giving it a market cap of $7 billion and making it the role model for a bevy of other “blockchain” companies. Then, as stock jockeys grappled with reality, shares plunged. As did the shares of other “blockchain” companies.

But then on March 12, it started all over again, when index provide FTSE Russell announced that LongFin would be added to some of its indices, including the widely-tracked Russell 2000, effective March 16: 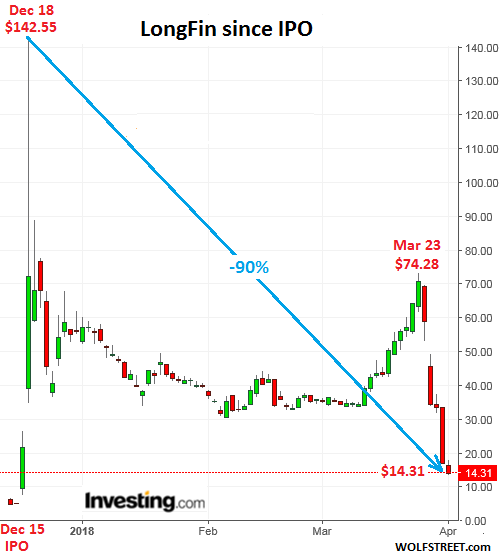 Then all kinds of things happened.

On March 26, short-seller Citron Research tweeted: “If you are fortunate enough to get a borrow, indeed $LFIN is a pure stock scheme. @sec_enforcement should not be far behind. Filings and press releases are riddled with inaccuracies and fraud.”

That day, Russell announced that Longfin would be removed from its indices, including from the Russell 2000, effective March 28, only days after it was added to the indices.

Russell justified this one-eighty by explaining that the company had misrepresented its free float of shares. In an SEC filing published on February 13, just before the Russell US Index rank date of February 14, Longfin “confirmed that up to a maximum of 1,140,000 of the shares offered had been taken up by the public,” out of 10,000,000 offered, meaning the public held over 11%. But Russell then “determined that LongFin failed to meet the minimum 5% free float requirement as at the 14 February cut-off date.”

Now the class-action lawyers are circling.

On March 30, former Attorney General of Louisiana, Charles C. Foti, Jr., Esq., a partner at the law firm Kahn Swick & Foti, LLC, announced that the firm has started “an investigation” into Longfin and is looking for potential plaintiffs who’d suffered losses.

Today, USMA Law Group announced that it too is investigating whether LongFin “and certain of its officers and directors violated federal securities laws.” It too is looking to represent aggrieved investors. It stated:

Throughout the Class Period, Defendants made false and/or misleading statements and/or failed to disclose that:

As a result of the fraudulent conduct alleged herein, Plaintiff and other members of the Class purchased Longfin common stock at artificially inflated prices and suffered significant losses and damages once the truth emerged

And the SEC started investigating the company for its lacking disclosures and misstatements.

Here’s what gets me…

After the first spike and crash, and after what some folks wrote about it – including your humble servant right here – it would seem that people would realize what kind of outfit this is, and that they would try to exit their shares, and be done with it, having learned a lesson about believing corporate gobbledygook instead of doing research. Then the shares would have died a quiet death in the graveyard of forgotten penny stocks.

But what kind of hyper-enthusiastic market is this that blindly keeps pursuing the latest scam, knowing all the things that are wrong with it? How can the people and algos that make up this market drive these shares so high as to give a nothing-company with the iffiest disclosures a market capitalization at one point of $7 billion? And after it crashes, how can these players in this market try to do this all over again?

These are rhetorical questions. The answer is clear: This market, despite the sell-offs here and there, including today, is still on cloud 9, with too much liquidity and over-enthusiastic gamblers trying to make their fortune overnight. And it will take many more sell-offs and the collapse of many more iffy stocks before this over-enthusiasm, after nine years of central bank nurturing, is finally wrung out of the market, and this can take many painful years.

Nothing goes to heck in a straight line. Read…  Collapse of Cryptocurrencies in Q1: Even the Biggest Crashed 67% to 88%

65 comments for “What Kind of Hyper-Enthusiastic Market is this that Blindly Keeps Pursuing Scams to Make a Fortune Overnight, even if They Already Crashed the First Time?”