The Fed has left the room.

Now banks are sending me expensive fliers in the mail, offering higher rates on deposits, trying to attract my money. This goes way beyond the fliers I’ve been getting for years that offer a one-time bonus for putting a big chunk of money into an account that earns no interest. The photo below is part of a three-section glossy cardboard foldout that I got in the mail. It says that these rates are exclusively available at the local branch. To get this deal, I’d have to go there so they can stare into the whites of my eyes.

“Act now and lock in these competitive rates,” it says. I added the blue marks: 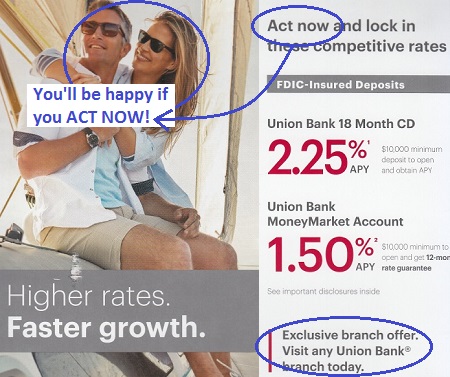 Union Bank, which is offering this, is not huge, with a little over $110 billion in assets. But it’s a storied San Francisco bank founded just after the Gold Rush. It still counts as a local bank, but it’s now owned by Japanese mega-bank Mitsubishi UFJ Financial Group.

It started late last year when I began noticing things. At first, I ran into it accidentally. Some banks were offering higher interest rates on CDs but only through brokers. At first, it was just a few banks, and rates were still low. Then there were more banks offering CDs at higher and higher rates. The other day, I found that Wells Fargo was offering the highest rates for these “brokered CDs,” for example a 13-month 2.25% CD. At the same time, it offered its existing clients near-zero rates.

Wells Fargo, Citibank, Bank of America, Morgan Stanley, and others want to reel in new money, and are willing to pay top dollars for this new money, in  competition with other banks, but aren’t willing to raise interest rates for existing customers. Other banks, including American Express Bank and Goldman Sachs’ new consumer bank, Marcus, are offering higher rates to new and existing customers alike.

American Banker weighed in on this topic in its May edition, with an article titled, “The Battle for Deposits Intensifies.” The trade paper has been on top of this trend since late last year, including a video posted on November 2, titled, “‘No question’ the war for deposits is on.”

In its current article, American Banker explains the strategies used by “big banks” to fight this battle the smart way – with Big Data – “ahead of what could be as many as four Federal Reserve rate hikes this year,” without ruining their fat margins and profits.

Over the past two quarters, at least two of the nation’s biggest banks – Wells Fargo and Bank of America – have tinkered with the way they set deposit rates, carving up a handful of key states into smaller markets…. The move will let the two banks more efficiently counter attempts by small banks and credit unions to lure customers away with deposit promotions [such as the one pictured above].

Other banks, meanwhile, are exploring new ways to use data and analytics to adjust rates for lucrative customer segments. For instance, some are offering promotions to affluent millennials who may be tempted to open higher-yielding accounts at online banks, observers said.

Taken together, the moves illustrate how the industry’s biggest players are becoming more precise and tech-savvy on setting deposit rates – and how they plan to respond once the federal funds rate rises enough to spur more intense competition for consumer deposits.

Interest rates offered by banks are on average still extremely low, including those offered by many banks to their current customers, even if the same banks offer much better deals on “brokered CDs” to attract new deposits. And that’s a good thing for profit margins and earnings.

A report by Fitch, cited by the American Banker, estimated if the eight systemically important banks in the US paid their existing depositors an average of only 75 basis points (0.75 percentage points) more on their retail savings accounts, the eight banks’ combined pretax income would drop by 11%.

The percentages may be small, but the amounts are gigantic: There are over $9 trillion in savings deposits at banks and credit unions in the US.

So competition to raise rates is to be avoided. But the Fed – after nine years of controlling the market by lining banks up all in one row behind near-zero deposit rates to avoid competition in order to fatten their profits and build their capital cushions – has now left the room. And instead of keeping competition for deposits down, the Fed has been raising rates.

“There is no way that these rates can remain as low as they are forever. My suspicion is that if one of the big banks broke ranks,” the others would follow, Deepak Goyal, a partner in the financial services practice at Boston Consulting Group, told the American Banker, which added:

Retail deposit rates vary by market, and most big banks are looking at ways to more nimbly respond to changes in consumer demand and competitive dynamics, observers said.

Wells Fargo, which has used regional pricing elsewhere in the country, split up its home state of California into four regions…. That move sets the bank up to offer different rates in each of those regions as needed.

Bank of America split four states… into two markets each.

You can tell how this regional pricing works when you look for CD offers on a bank’s website, and the first thing it asks you for is your zip code, “so we can give you accurate rate and fee information for your location,” as Bank of America puts it:

Competitive deposit pricing, after having disappeared under the Fed’s interest-rate-repression rule, is now front and center. Banks are using data and “tech savvy” approaches to try to attract the most amount of money by offering higher rates only to some customers while keeping the deposits of most other customers in the near-zero basement, hoping they’ll never get out. And bank customers and savers have to re-learn to aggressively shop for deposit rates – or else they’ll get stiffed forever.

But it’s a godsend for those savers who are trying. Read…  Fight for Deposits Erupts among Banks, with Winners & Losers

72 comments for ““Act Now and Lock in” these Deposit Rates: Banking Cat-Fight Breaks Out Like We Haven’t Seen in Over 10 Years”