When the “hot money” gets antsy, a currency crisis morphs into a debt crisis.

You just don’t lend Argentina’s government money. Not in its own currency, because it relentlessly destroys that currency, and not in a foreign currency, because it will default on it. Lending money to Argentina is like trying to run across a 16-lane freeway with traffic zooming by at 70 mph. You just don’t do it. You might get through it. But there’s a good chance it’s going to cost you, and perhaps dearly, and you shouldn’t be surprised if it does.

The Ministry of Finance said the yields of the bonds sold in January – however juicy they may have seemed to NIRP and ZIRP-mauled investors – were the lowest in Argentina’s history. It had received $21.4 billion in orders for those $9 billion of bonds.

But these eager investors were trying to cross the 16-lane freeway. And now they act surprised that they got hit so quickly and before they could get out of those bonds.

Argentina’s peso is now in free-fall even though the Central Bank raised its interest rate three times last week to a stunning 40% to halt the plunge. Inflation is 25% and might get worse. And on Tuesday, the government began begging the IMF for a bailout to help deal with its currency crisis that is morphing into a dollar-denominated-debt crisis. Investors are ruing the day.

The daily chart below shows the cliff-dive Argentina’s peso has undertaken. Since early February, the ARS has fallen 16%, and since late April 11%, most of it over the last eight trading days, despite the efforts by the central bank to stem the fall by selling scarce foreign exchange reserves and by jacking up its policy rate to 40%. This morning, the currency is at a new record low of 22.68 ARS to the USD. Seen the other way around, 1 peso is now worth just 4.4 cents: 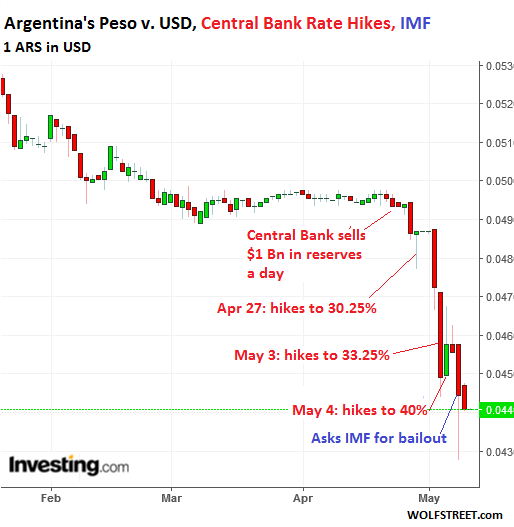 But it’s not just Argentina.

Former Federal Reserve Vice Chairman Stanley Fischer said on Wednesday that the turbulence from the rising dollar and from rising US interest rates that make the dollar more attractive hit emerging markets “a little more quickly than I had anticipated, and now that one sees it, one sees a couple of countries…which are closer to being in trouble and having to take strong policy measures.”

He didn’t specify which “couple of countries,” but one of them clearly is bond-investor darling, Argentina.

Will the situation be “stabilized,” he wondered. “Well, it requires a lot of people to do the right thing at the right time, and the right time is pretty soon for many of them.”

So OK, maybe it won’t be “stabilized.”

Among the other standouts, the Mexican peso has fallen 12.5% since February 20, half of that since April 19, to 19.56 pesos to the USD on Wednesday evening. Looking at it the other way, this daily chart shows the value of the MXN in USD, where 1 peso has fallen to just 5.1 cents: 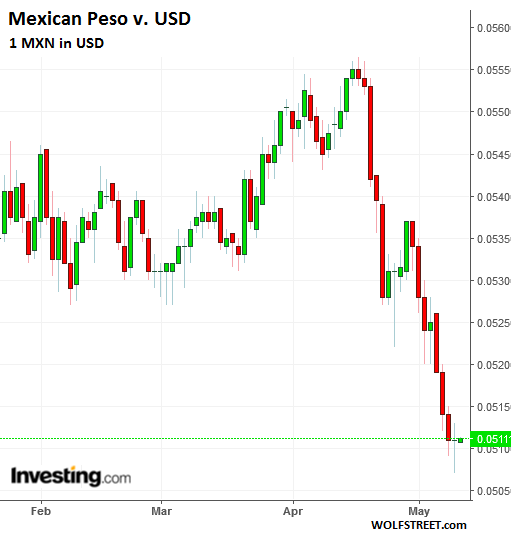 The Brazilian real has dropped 12% against the dollar since the end of January: 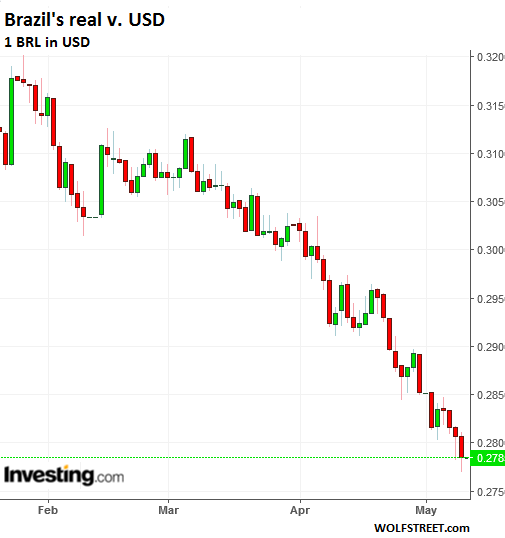 The Turkish lira has dropped 13% against the USD since early February: 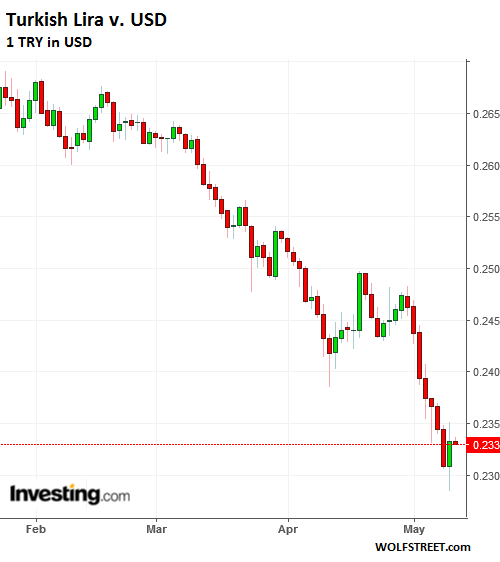 The Russian ruble has dropped 11.5% since early February, despite the surge in the price of oil since then: 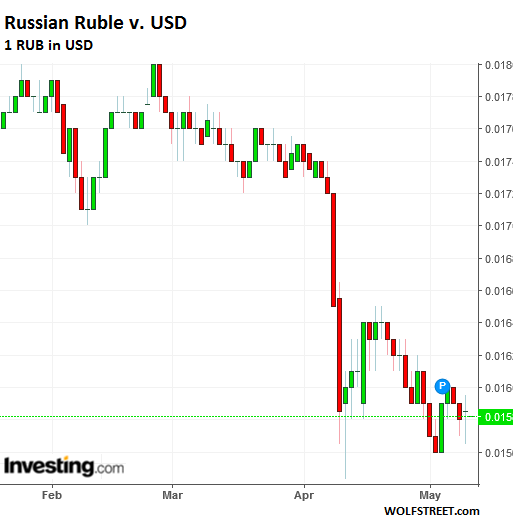 Other emerging-market currencies have not been hit as much. For example, the Indian rupee and the Indonesian rupiah are both down a little over 5% since early February. And clearly, there are going to be some bounces in the future, of the type that have already occurred, visible in the charts above.

After the mini-turmoil in 2015 and early 2016, the emerging markets once again became a sought-after destination for the hot money. Conservative sounding EM bond mutual funds touted huge yields to US-based investors, powered by dollar-denominated EM bonds, such as the 100-year bonds from Argentina. But these foreign currency bonds get increasingly difficult to service for these countries when the local currency crashes.

And that’s on the horizon now. That’s how a currency crisis becomes a debt crisis.

These open-end bond mutual funds have to sell the underlying bonds when bond-fund holders are getting cold feet and begin selling that mutual fund. Hedge funds have plowed into EM investments that are now looking iffy, and they’re trying to pull out. This type of selling in an illiquid market drives bond prices down further, and thus pushes yields up to where the affected countries have trouble selling new foreign-currency bonds to service the existing foreign-currency bonds. That’s when they go begging to the IMF, as Argentina is now doing.

These investors were betting on, and secretly praying for, a falling dollar and continued low interest rates, figuring that the Fed would never be able to raise rates beyond the first few tries. The dollar cooperated in 2017 by falling sharply, but in February this year it reversed course. And the Fed has been methodically tightening since late 2016.

Rising interest rates in the US has unleashed competition among banks for deposits for the first time in a decade, and the Fed is allowing it to happen. Read… “Act Now and Lock in” these Deposit Rates: Banking Cat-Fight Breaks Out Like We Haven’t Seen in Over 10 Years

67 comments for “As US Dollar & Interest Rates Rise, All Heck Breaks Loose in Emerging Market Currencies”