But it’s a godsend for savers. 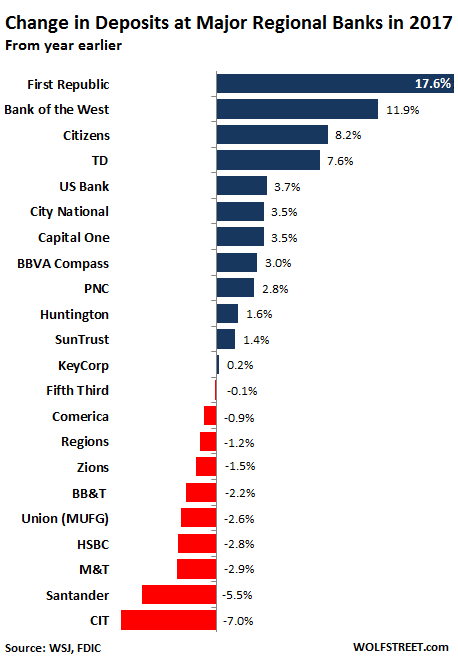 Competition for cash has returned with a vengeance, after the Fed stifled it in 2008 to keep the cost of funding for banks to near zero so that they could maximize their profits in order to rebuild their capital after teetering on the verge of collapse. Savers paid for it.

On Friday, I described the all-out scramble to attract deposits from my boots-on-the-ground view, with Wells Fargo out-competing other banks by offering 2.25% for 13-month FDIC-insured CDs, and more for CDs with longer maturities, but only through brokers (“brokered CDs”), and not to its existing customers, with whom the bank is exceptionally stingy.

This newly aggressive approach to gaining deposits has some impact on other banks.

M&T Bank Corp, third from the bottom in the chart above, experienced a 6% drain of its deposits in Q1, after having experienced a 2.9% drop in 2017. “It’s a big concern for us and the industry,” CFO Darren King told the Wall Street Journal.

Of these deposits, $359 billion were “non-interest bearing” altogether. And many of the $938 billion in “interest-bearing” deposits carried only minuscule interest – so minuscule that it’s essentially zero. But “brokered” CDs with which Wells Fargo is aggressively trying to recruit new money from non-customers helped push its average “deposit cost” up by 100% year-over-year, albeit from a minuscule 0.17% in Q1 2017 to a still minuscule 0.34% in Q1 2018.

Deposits are a crucial and very cheap source of funding for banks, which make money by lending to their customers at higher rates than their cost of funding. So the name of the game is to keep “deposit costs” down while attracting enough deposits to lend out. And Wells Fargo’s still near-zero average deposit cost, even after the interest rate increases in the market, shows just how well this equation is working.

While deposits in checking and savings accounts can be volatile, as people might draw their money out all at once (run on the bank), CDs provide much needed funding stability, so banks are willing to pay a little more. But if deposits dwindle at a bank, it might have to pay a lot more for funding from other sources, or it might have to curtail lending, which would crimp its profits.

The Wall Street Journal today observed in reference to the efforts by the biggest banks – such as JPMorgan Chase, Bank of America, and Wells Fargo – to attract deposits:

Welcome to the new world of Main Street banking, where deposits are starting to head out the door after years of growth. This month, major regional banks reported the increasing competition for deposits in their first-quarter earnings. Some lenders, including Dallas’s Comerica Inc. and Regions Financial Corp. of Birmingham, Ala., lost deposits compared with a year ago. Others are still adding deposits, but at a much slower pace than recent years.

But it’s not just the regional banks that have watched their deposits drain, according to the Journal:

The smallest U.S. banks, which tend be community lenders with a handful of branches, have also seen deposits decline, according to an analysis by investment bank FIG Partners.

And these declines in deposits at some banks – while other banks are aggressively pursuing and gaining deposits – “could mark the start of an important industry shift where deposits become less plentiful and Main Street banks do more to compete for them.”

That competition, however much banks may hate it, is a godsend for savers and small businesses that have placed a total of $9.1 trillion in “savings deposits” at all “depository institutions” — which includes credit unions — in the US. If rates rise across the board by one percentage point, it would amount to about $91 billion a year in extra income and thus extra spending money for these people and businesses.

For most banks, running short on deposits to lend out isn’t a huge issue just yet: At the end of 2017, about 72% of the deposits were lent out. So on average there’s some room left, though for some banks, it might be getting tight.

Banks are focused on another issue: Rising interest rates. By this time next year, short-term rates might be a full percentage point higher than today. And Wells Fargo might have to offer 3.25% on a 13-month CD to attract more deposits, or else deposits might start draining from its “community banking” category. So if it can get customers to buy its currently offered 25-months CD at 2.75%, it locks in this source of funding for two years at a lower overall rate. And the fact that banks are now fighting over deposits, and that they’re outbidding each other, shows that they take the likelihood of higher interest rates, and higher funding costs in future years very seriously, and are preparing for it.

Here’s my boots-on-the-ground report of how Wells Fargo is doing it. Read… I Asked my Wells Fargo Branch about CDs with Higher Interest Rates. This is What Happened Next

52 comments for “Fight for Deposits Erupts among Banks, with Winners & Losers”