The new Fed remains a somewhat unknown quantity: There are still four vacancies on the Fed’s seven-member Board of Governors that forms the core of the policy-making FOMC. The new Chairman, Jerome Powell, has already shown in his testimony before Congress last week that he may use a little more straight talk than his predecessors, and the markets took notice.

No one knows for sure what this new Fed will look like once the four vacancies are filled. But this new Fed will likely try to push interest rates back to a somewhat more normal level and lighten their balance sheet so that they have some options when the business cycle trips over balled-up credit problems.

With consumers, the credit problems appear first among the most fragile, most at risk, and most strung-out – borrowers with subprime credit ratings, and with lenders that went after these consumers aggressively. And this is happening now.

Small banks pushed with all their might into credit cards, loosening credit standards, lowering credit score requirements, raising credit limits, and offering new cards to people who had already maxed out their existing cards and had limited or no ability to service them from their income, and no way of paying them off – and thus are stuck with usurious interest rates that make these credit card balances impossible to service.

For small banks it was the Holy Grail: to profit from the American debt slave.

There are about 4,888 commercial banks in the US. There are the top 100 banks, and there are the 4,788 smaller banks – those with less than $14 billion in assets. These smaller banks have seen this irresistibly sweet deal. Banks were paying next to nothing in interest to their depositors, but they could charge 25% or 30% interest on outstanding credit card balances. The interest-rate spread between these two products was just too juicy, in this otherwise low-interest rate environment.

Now small banks are getting their clocks cleaned by these American debt slaves that they have gone after so aggressively and that suddenly cannot make their credit payments. Charge-off rates – the portion of outstanding credit card balances that a bank writes off as a loss – spiked to 7.5% and 7.4% of total balances in Q3 and Q4 respectively, according to the Fed’s Board of Governors. Those were the highest charge-off rates since Q2 2010, up from 4.6% a year earlier, and up from 3.5% two years earlier.

Credit card charge-offs at the largest 100 banks are also increasing, but slowly. In Q4, they were at 3.6%, just slightly higher than a year earlier (3.4%): 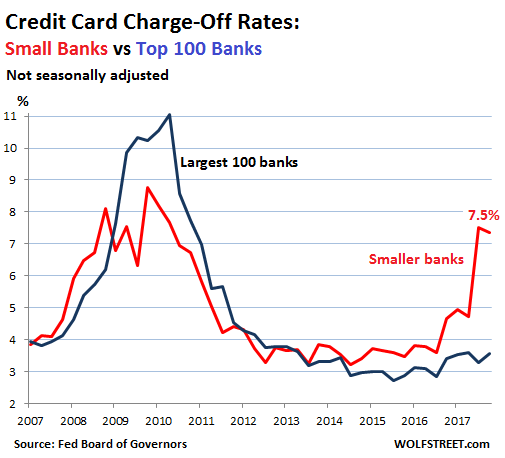 These 4,788 small banks hold only a small portion of all banking assets, including credit card balances. So this won’t jeopardize the financial system. But the surge in charge-offs at these banks does give a glimpse at the credit problems at the margin: And this is a leading indicator for a broader cycle.

Credit card debt surged recently, starting with a phenomenal spike in Q4 2016 and continued throughout 2017, when credit card balances pushed past the crazy peak at the onset of the Great Recession. 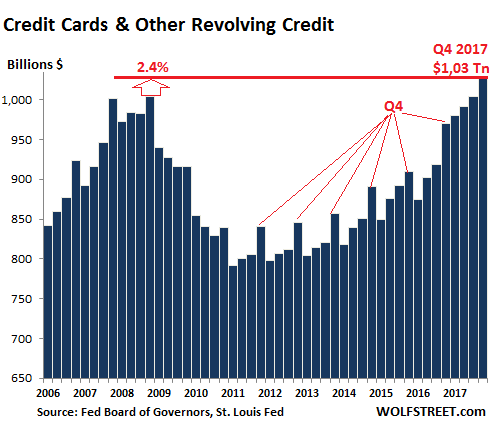 But note: There are a large number of consumers who pay off their credit cards every month and just use them as a payment method. They have money in the bank and in investments, and they don’t need to borrow at 25% to buy groceries. The same applies to homeowners: Many of them own their homes outright or have paid down their principal balance by a large amount. These consumers are not at risk. The problems occur at the most fragile 20%.

And this spike in credit card charge-offs at smaller banks – the most aggressive end of the market – is a first sign that the business cycle has started to turn at the margin.

This comes after eight years of the Fed’s easy-money policies. But that era is now drawing to a close. The Fed has been hiking rates and unwinding its balance sheet with clockwork regularity, and with the distinct possibility of speeding up the rate hikes just when – since the Fed is famously behind the curve – the first sign of these credit problems have appeared at the margin: small banks exposed to the most strung-out consumers.

From there, credit problems spread to less fragile consumers, and they’ll spread into the corporate sector and into real estate. But banks are still pushing credit cards, and junk-rated companies are still swimming in cheap liquidity. This tells us that the credit cycle will turn only slowly, and that problems will be visible only at the margins for a while – this could be a year or two – papered over by larger numbers and averages. But it seems the Fed is painfully aware that the cycle is turning, that it waited too long, and that it’s time to create some leeway to cut rates later on.

55 comments for “Are Subprime Debt Slaves, a Leading Indicator, Worrying the Fed?”