The total damage Hurricane Harvey inflicted on parts of Texas, particularly the vast Houston area, may never be fully known. In terms of vehicles, the estimates were all over the place. But one thing is known: Before the flood waters had even begun to recede, the entire industry, was salivating over that huge “replacement demand.”

This would come just in the nick of time, as total new vehicle sales in the US had already fallen by about 300,000 units for the year through July, despite record incentives, historically low interest rates, and muscular all-encompassing marketing. The industry’s elements on Wall Street propagated the idea that post-Harvey “replacement demand” would boost auto sales in 2017, turn the year around, and possibly create another record year, with more booming sales in 2018.

The estimates I have come across at the time ranged from 300,000 vehicles at the low end to over 600,000 vehicles that would need to be replaced. Much of this replacement demand would occur over the remaining months in 2017 and early 2018. These sales would be so big that they would boost US sales overall to new highs.

But now the first real numbers are emerging. Turns out even the low-end estimates of replacement demand were too high, and all that salivation over the projected sales boom based on the larger estimates was wasted. Harvey-based sales increases of new vehicles are real, but they won’t be able to pull out 2017 unit sales.

New vehicle sales in the Houston metro, battered by the oil bust, had already plunged to Financial Crisis levels before the hurricane. In the 12 months through July, dealers sold 284,000 new vehicles, down 25% from the levels in late 2015 and early 2016, according to TexAuto Facts, published by InfoNation at the time.

Hurricane Harvey brought sales to a halt in late August, and new vehicle sales plunged 45.5% from the already beaten down levels last year to just 15,473 vehicles for the month.

In September, the first few days of sales were essentially zero. But then dealerships reopened, and the mad scramble began, and in the remaining days of the month, Houston-area dealers sold an astonishing 28,246 vehicles, up 22% from the beaten-down levels a year earlier. The rolling 12-month total, at 277,621 vehicles, was still down 10% from the same period a year earlier.

In October, Houston-area new vehicle sales spiked 31.6% year-over-year, to 33,211 units. It was a huge increase. Dealers were red-hot. But it wasn’t enough. During the 12 months through October, dealers sold 285,604 vehicles, still down 6.3% from the beaten-down levels a year earlier.

“Demand for replacement vehicles in the aftermath of Harvey has caused sales to spike since August, though the short-term rebound is unlikely to reverse the overall downward trend,” said InfoNation at the time.

Today, TexAuto Facts released the November sales data, published by InfoNation, cited by the Greater Houston Partnership: New Vehicle sales in the Houston-area jumped 35.4% year-over-year to 30,670 vehicles. It was huge for a November. Compared to 2015, before the oil bust collided with the auto industry head-on, November 2017 sales were up 25%! The rolling 12-month total, at 293,614 vehicles, was still down 3.1% from the financial-crisis levels a year earlier (chart by the Greater Houston Partnership, red marks added): 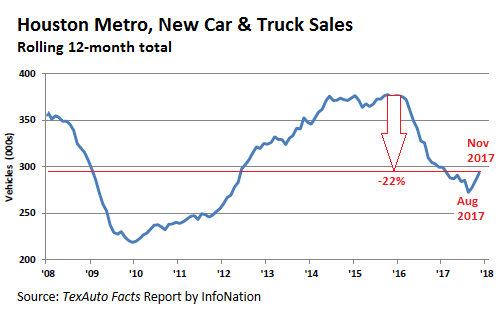 These are booming sales by any standard, a big breath of fresh air for Houston dealers, but just not enough to meet the prior estimates of replacement demand that were hoped to pull out the rest of the nation’s auto sales.

InfoNation, whose estimates of replacement demand had already been at the very low end of the spectrum, put it this way in its report:

InfoNation estimates that Harvey replacements account for 26,600 of the 92,127 new vehicles sold since the start of September. The DMV counted 175,102 flood damaged vehicles through the end of November. Though that number will likely continue to rise, it may signal that the scope of damage was less than the 300,000 vehicles previously estimated.

And there’s more, according to InfoNation: Sales of used vehicles actually dropped from a white-hot 83,000 in October to 62,500 in November. The replacement boom is already fading.

In other words, sales at dealers in the hurricane-affected areas are booming. And dealers are busy and are loving it, but it’s just not enough to overcome the downturn in auto sales in the rest of the nation, and even those effects are beginning to fade.

Nationwide through November, industry sales are 232,600 new vehicles behind the same period last year. In order to end the year 2017 flat with 2016, new vehicles sales in December in the US would have to surge by 13.8% year-over-year, an impossibly large nut to crack. The industry will be lucky to not fall further behind because December 2016 had been a phenomenal month and will be hard to beat.

So 2017 will be a down year for the auto industry – and not by a hair either – despite record incentives, historically low interest rates, and muscular marketing. And in 2018, replacement demand will peter out after the first few months, and auto sales will be left to their own devices.

This is where Hype Goes to Die. Read… Carmageddon for Tesla

24 comments for ““Replacement Demand” from Hurricane Harvey Overhyped, Carmageddon Returns to US”