The yield spread collapses to lowest since 2007.

Prices of US Treasury securities fell across the spectrum on Monday, and yields rose. From the two-year yield on down, yields set new nine-year highs.

This sell-off – and the accompanying surge in yields – has occurred for months without downdraft in stocks and without a slowdown in economic growth. It’s a dreamy scenario where the Fed’s tightening has no negative impact on the economy. But the Treasury market at the longer end smells a rat.

Not for this year. But for later.

On top of it there comes a big bout of Fed uncertainty. Janet Yellen, who will be replaced next year by Jerome Powell as Fed Chair, announced today that she would also vacate her slot as governor on the Federal Reserve Board – a job she could have hung on to until 2024 – thereby making room for a fifth Trump appointee to the powerful Board of Governors. In early October Trump nominated and the Senate approved Randal Quarles as a member of the Board. Leaves four slots to fill on the Board of seven members. And no one knows what the Fed will look like next year.

Upon Yellen’s unsurprising announcement on Monday, Treasury securities stayed on trend. The three-month yield is responding nicely to the Fed’s messaging about another hike of its target range for the federal funds rate in December. After hitting 0% in October 2015, the three-month yield rose to 1.30% on Monday, the highest since September 12, 2008. Thus it now exceeds the Fed’s current target range of 1% to 1.25%: 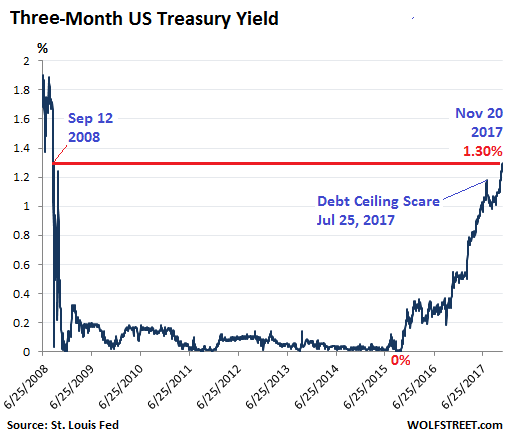 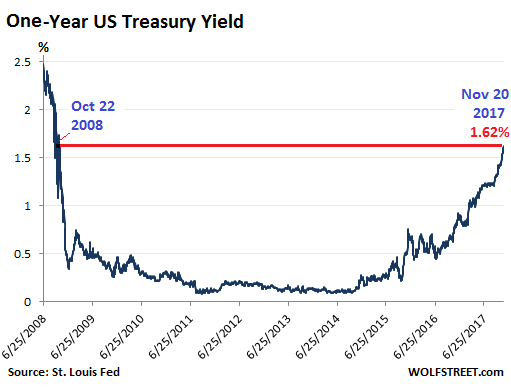 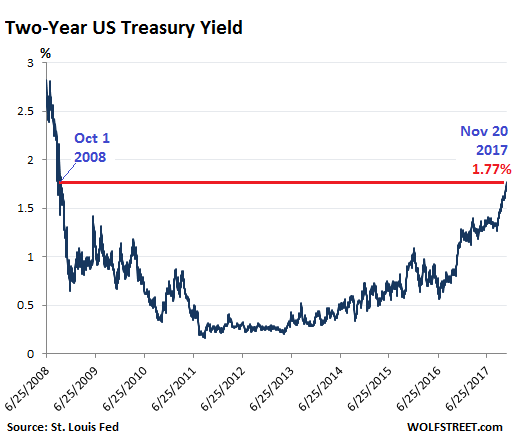 But with maturities of three years and higher, a cacophony has broken out, with longer-term yields jumping up and down energetically. The 10-year yield rose to 2.37% on Monday. That’s still down from earlier in November and down from late last year and early this year. But it’s up a full percentage point from the low of 1.37% in August 2016, the lowest in the data series going back to the 1960s: 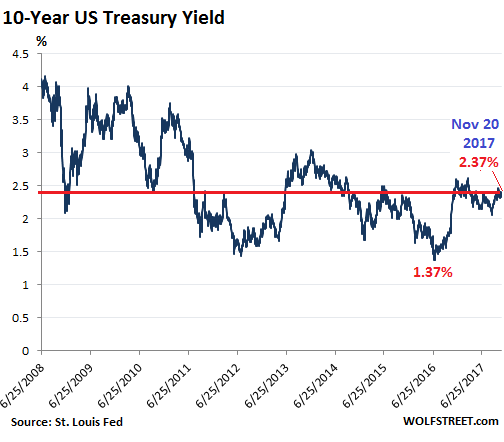 The two year yield’s relationship to the 10-year yield has proven to be an ominous precursor in the past. And it’s at it again, to the point where the difference between these two yields – the “spread” – has made its way onto the Fed’s worry list. That spread has collapsed to 0.60 percentage points, the lowest since November 1, 2007.

Back in November 2007, the spread was widening after having been negative in late 2006 and early 2007 as part of an “inverted” yield curve when investors chased after Treasuries with long maturities, and their yields fell, even as they dumped Treasuries with shorter maturities and their yields rose. Not much later, the Financial Crisis cracked the veneer of the banks. So this spread is the bond market’s reaction to something – and it’s not propitious: 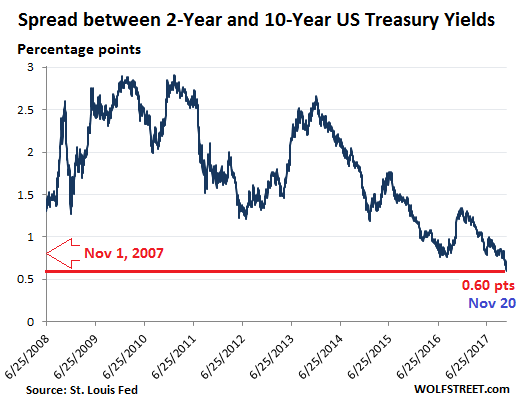 This makes for a peculiar yield curve. The chart below shows Monday’s yields (red line) across the maturities, and the yields on December 14, 2016 (blue line), when the Fed got serious about tightening. Note how the yield curve has “flattened,” with the short end rising and the long end falling compared to December 2016. If yields of longer maturities continue to drop and fall below yields of shorter maturities, the yield curve “inverts.” The last time it inverted was a precursor to the Financial Crisis. 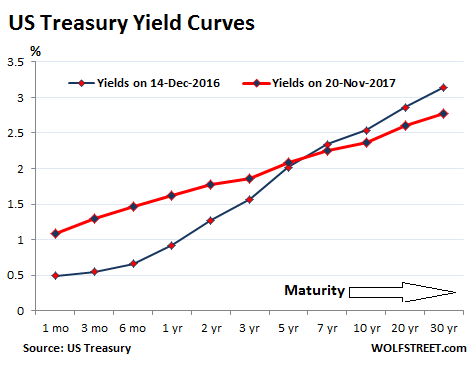 But this time, the Fed has a new set of tools to combat the inversion of the yield curve: its $4.5 trillion balance sheet. The Fed has already kicked off its QE unwind, allowing maturing securities to roll off without replacement, but at an utterly timid pace for now. Its new tool: If it wants to bring up longer yields, it can announce with fanfare that it will outright sell Treasury securities that won’t mature for years and then actually dump them on the market. Watch long-term yields jump — along with the financial fireworks this will create.

What the Fed currently sees – after four rate hikes and a fifth coming, and after kicking off the QE unwind – is an orderly selloff at the short end of the curve that hasn’t caused any kind of market tantrum. Markets are not rattled by this at all. Stocks are riding high. Corporate bond yields remain very low. And this could encourage the Fed – the new Fed next year – to pursue its “normalization” strategy more vigorously, while trying to get the yield curve to tilt up at the long end, and do all this while it still can before the next recession shows up and before markets throw a serious hissy-fit.

59 comments for “The US Treasury Market Smells a Rat”