But what’s happening with mortgage-backed securities?

Thursday afternoon, the Fed released its weekly balance sheet for the week ending November 1. This completes the first month of the QE unwind, or “balance sheet normalization,” as the Fed calls it. But curious things are happening on the Fed’s balance sheet.

On September 20, the Fed announced that the QE unwind would begin October 1, at the pace announced at its June 14 meeting. This would shrink the Fed’s balance sheet by $10 billion a month for each of the first three months. The shrinkage would then accelerate every three months. A year from now, the shrinkage would reach $50 billion a month – a rate of $600 billion a year – and continue at that pace. This would gradually destroy some of the trillions that had been created out of nothing during QE.

Over the five weekly balance sheets since the QE-unwind kick-off date, total assets rose initially by $10 billion from October 4 to October 18 and then fell by $14 billion, for a net decline of $4 billion. By November 1, total assets were $4,456 billion: 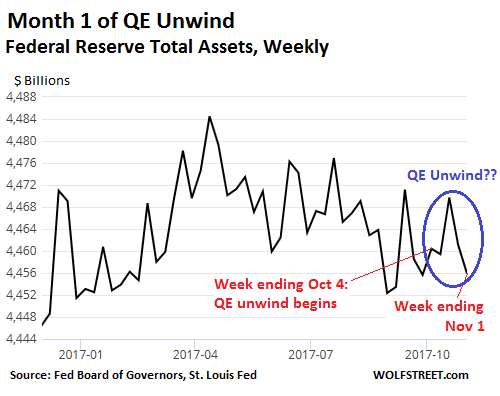 The Fed is supposed to unload $10 billion in October. Instead it unloaded $4 billion. And the variations from week to week are entirely in the normal range of the prior months.

The chart below shows the Fed’s total assets since 2007, covering the entire QE period from the Financial Crisis on. The tiny $4-billion decline in October gets lost in the massive table mountain of assets:

But a first real step has happened.

As part of the $10 billion that the Fed said it would shrink its balance sheet in October, it was supposed to unload $6 billion in Treasury securities.

The way the Fed undertakes the balance sheet normalization is not by selling Treasury securities outright but by allowing them, when they mature, to “roll off” the balance sheet. In order words, when they mature, the Treasury Department pays the Fed the face value of those securities. Then, instead of reinvesting the money in new Treasuries, the Fed destroys the money. This is the opposite of what it had done during QE when it created the money to buy securities.

On October 31, $8.5 billion of Treasuries that the Fed had been holding matured. If the Fed stuck to its announcement, it would have reinvested $2.5 billion and let $6 billion (the cap for the month of October) “roll off.” The amount of Treasuries on the balance sheet should then have decreased by $6 billion. 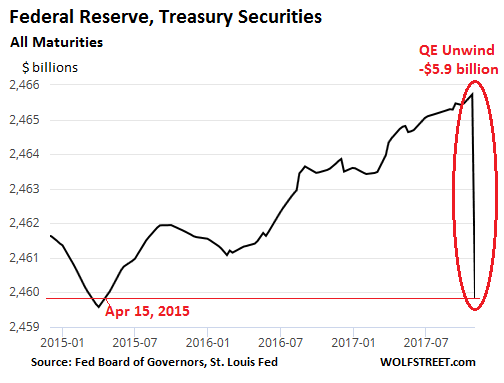 So the QE unwind of Treasury securities has commenced.

As part of the $10 billion unwind in October, the Fed was also supposed to unload $4 billion in mortgage-backed securities (MBS). How did that go so far? 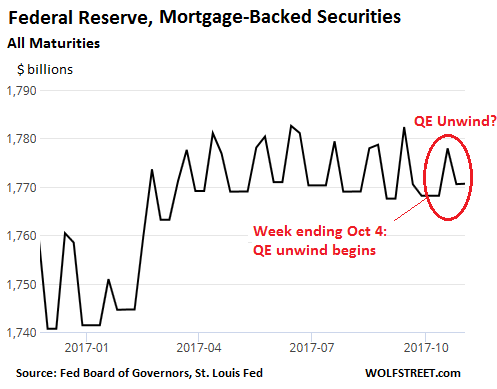 Clearly, the Fed has not yet kicked off the unwind of its MBS portfolio. Since the end of QE, the Fed’s Open Market Operations (OMO) has continually purchased small amounts of MBS in the market. Residential MBS are different from bonds. They regularly forward principal payments to their holders as underlying mortgages get paid down or off, and the principal shrinks until whatever is left is redeemed at maturity. To keep the MBS balance steady, the Fed has to buy MBS in the market.

And it has continued buying them in October with stoic routine.

This bifurcation – that the QE unwind is happening with Treasury securities but not with MBS – is curious. But MBS take a while to settle, which could explain some of the delay. After the on-target $6-billion drop in Treasuries, however, I’m tempted to think that the QE unwind of MBS will also eventually materialize, and that the overall package will proceed as announced.

For now, the amounts are small. By next year at this time, the QE unwind, if it happens as announced, will proceed at a rate of $600 billion a year, a momentous monetary policy change, partially reversing the effects of QE, including QE’s effect on asset prices.

And the surge in asset prices has been a doozie. Here’s the extraordinary home price inflation in all its beauty. Read…   The US Cities with the Biggest Housing Bubbles

93 comments for “The Fed Actually Begins its QE Unwind”