Curious things are happening on its balance sheet.

The last Fed meeting ended on September 20 with a momentous announcement, confirming what had been telegraphed for months: the QE unwind would begin October 1.

The unwind would proceed at the pace announced at its June 14 meeting. It would shrink the Fed’s balance sheet – “balance sheet normalization” it calls that – and undo what serial bouts of QE have done: gradually destroying some of the money that had been created out of nothing during QE.

Thursday afternoon, the Fed released its weekly balance sheet for the week ending October 18. We’re now two and half weeks and three weekly balance-sheet releases into the QE unwind period. How much has the Fed actually reduced its balances sheet?

You read correctly: Since October 4, the balance sheet gained $10 billion, all of it in the week ending October 18.

The Fed is supposed to unload $10 billion in October. But curiously, so far, it has done the opposite. This chart shows the balance sheet movements so far this year. Note the jump in the last week: 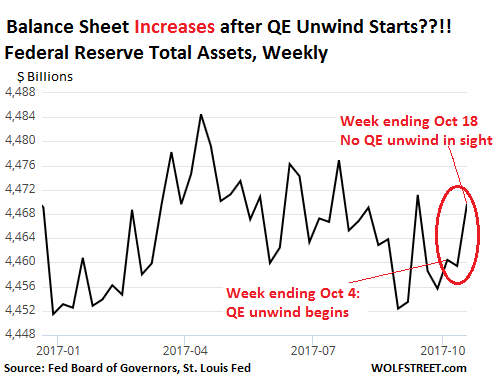 The chart below shows the Fed’s total assets over the entire QE period from before the Financial Crisis through the currently missing QE unwind. There was a mini-unwind after QE-1 and that was about it: 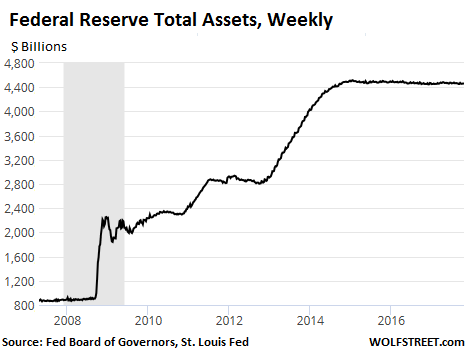 As part of the $10 billion that the Fed said it would shrink its balance sheet in October, it is supposed to unload $6 billion in Treasury securities and $4 billion in mortgage backed securities. How did that go so far? 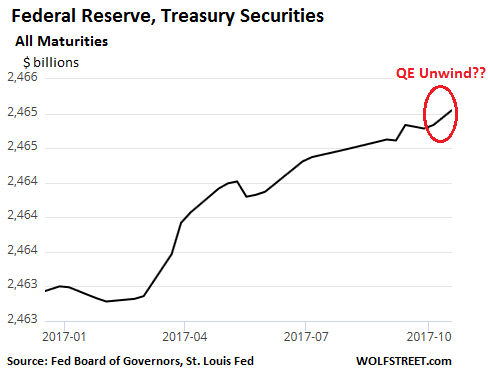 And even crasser: Since October 4, the Fed has piled on $9.8 billion in mortgage-backed securities, and there is no sign of any unwind either: 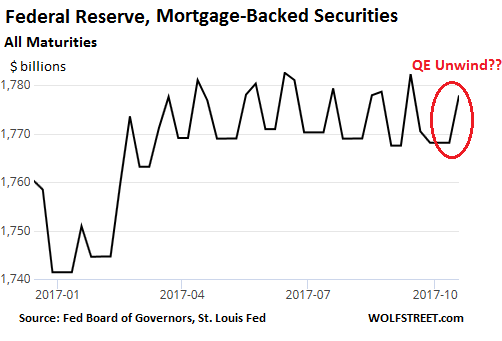 In fact, looking at the Fed’s Open Market Operations (OMO), the Fed’s “Trading Desk,” as it calls this entity, was very busy nearly every day in the MBS market, buying between $400 million to over $2 billion of MBS per day.

The Fed has done this since the end of QE in order to keep the MBS on its balance sheet about even. MBS securities constantly forward principal payments to their holders (as underlying mortgages get paid down or off), and unlike regular bonds, they shrink until they’re redeemed at maturity. To keep the MBS balance steady, the Fed has to constantly buy MBS. So this just continues its routine.

But clearly, there is no sign that the Fed has backed off from its purchasing activity – which leaves several possible conclusions:

Whatever the reason, the announced “balance sheet normalization” is not taking place. The opposite is taking place.

By contrast, when QE was started in late 2008, the Fed kicked it off with an explosive vengeance. The folks at the Trading Desk didn’t dillydally around. In the 10 weeks between September 3, 2008 and November 12, 2008, they purchased $1.3 trillion of securities, ballooning the balance sheet by 144%.

Sure, some people may say that a few weeks are not enough time to judge the Fed on its QE unwind. But this is not something we’re going to ignore. And so far, the Fed is doing the opposite of what it said it would do.

Pricing of risk kicks the bucket in record central-bank absurdity. Read…  This is What it Looks Like When Credit Markets Go Nuts

125 comments for “Is the Fed Getting Cold Feet about the QE Unwind?”