As the days pass, the perverse effects of central bank policies on the financial markets are getting more and more amazing. This includes the record-setting nuttiness now reigning in the European bond market, compared to the mere semi-nuttiness in the US bond market.

The 10-year yield of US Treasury Securities closed at 2.34% yesterday and at 2.33% today. This is low by historical standards. It’s barely above the rate of consumer price inflation as measured by CPI, which was 2.2% in September. This means that coupon payments barely make up for the loss of purchasing power. If inflation ticks up just a little, bondholders will be left in the hole. And a yield this low doesn’t compensate bondholders for any other risks, including duration risk, which can be significant. In other words, this is a bad deal.

But in this strange world, it looks practically sane, compared to the Draghi-engineered negative-yield absurdity that has overtaken the Eurozone, where the average yield of euro junk bonds – the riskiest bonds out there – dropped to 2.16%.

This chart, based on the BofA Merrill Lynch Euro High Yield Index via the St. Louis Fed, shows how the average euro junk-bond yield (red line) has plunged so far this year, on the way to what? Zero? The 10-year US Treasury yield (black line) has started rising in past weeks and, in late September rose above the euro junk bond yield for the first time ever: 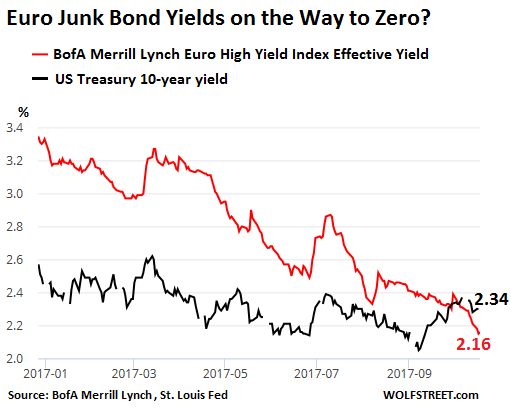 This average junk-bond yield is based on a basket of below-investment-grade corporate bonds denominated in euros. Among the issuers are European subsidiaries of junk-rated American companies. For them, it’s nearly free money.

The nutty thing is this:

These euro junk bonds are rated below investment grade. They have been issued by over-indebted companies with a considerable risk of default. Liquidity is low in the corporate bond market, and it can be difficult to sell the bonds when the selling starts. And unlike the US government, which prints its own money, corporate entities can – and do – go bankrupt.

But the ECB has been buying all kinds of securities, including corporate bonds, in its efforts to push yields down. As yields fall, bond prices rise. And so it has created the largest credit bubble ever.

This started in the summer of 2012, when Draghi pronounced the magic words that he’d do “whatever it takes” the bring sovereign bond yields down. This was designed to save Italy and other periphery states from default. The average junk-bond yield had peaked during the debt crisis at around 11%, and at 25% during the Financial Crisis. By October 2013, it had dropped below 5% for the first time ever.

This chart shows the path of the euro junk bond yield since the debt crisis, from over 11% to 2.16%: 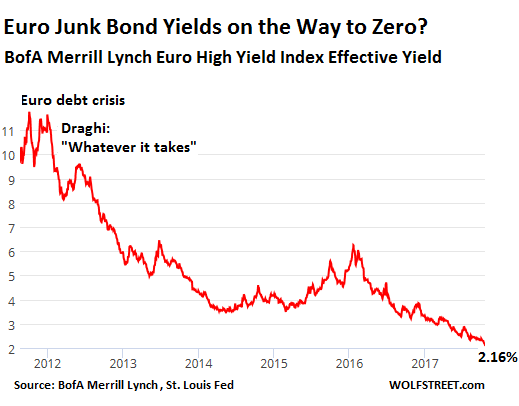 That the average euro junk bond yield is now 2.16% has special meaning when compared to the 10-year US Treasury yield that, at 2.34%, is so low that the Fed has been publicly fretting about it.

US Treasury securities have a credit risk of near zero because the US government cannot go bankrupt because it can always print more money via the Fed. And the US Treasury market is the most liquid bond market in the world. The risks inherent in Treasuries are incomparably lower than those inherent in euro junk bonds with equivalent maturities. So investors should be paid a lot more for holding risky junk bonds.

Thanks to Draghi’s scorched-earth monetary nuttiness…

The 10-year US Treasury yield and the average euro junk bond yield over the longer term form this WTF chart: 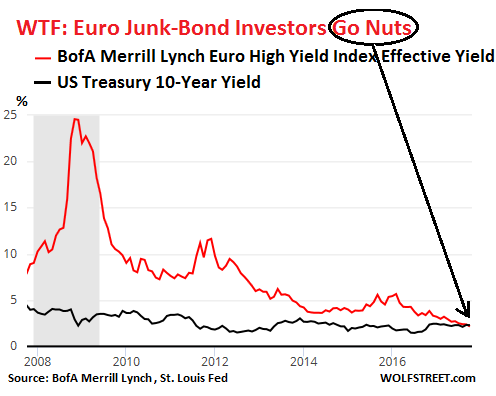 The chart shows how investors used to be compensated with extra yield for taking on the very real risks of euro junk bonds, and how that risk premium completely disappeared over the past year, and how in recent days it even inverted.

Plenty of these junk bonds will default. Investors will be left to lick their wounds. And they know this. But these are institutional investors, such as pension funds and life insurance companies that offer pension products in Europe and elsewhere. They’re administering the future pension payouts of retirees. They’re plowing other people’s money into this junk-bond sinkhole because they’re obligated to.

The bag-holders are not money managers, but future retirees.

Some pension payouts beyond the required minimum (such as the Überschussbeteiligungen, as they’re called inimitably in German) have already gotten slashed, and many more will experience the same fate. In the process, the future consumption of these retirees is being slashed too — and there will be a lot of them in aging Europe. Borrow from tomorrow to commit this nuttiness today.

Draghi’s only hope is that he can keep this scheme together until his term expires in 2019, and that someone else will have to deal with and get blamed for the consequences.

In the US, the ballooning National Debt has magically disappeared from the political agenda, but the stock market has suddenly taken center stage. Read… Mnuchin Deploys Stock Market Bubble as Political Weapon