But the ballooning National Debt has disappeared from the agenda.

The S&P 500 has soared 20% since the presidential election, the Dow Jones Industrial Average 26%, and the Nasdaq 28%, in about 11 months. Understandably, everyone is taking credit for the surge in stock prices, including President Trump, who according to CNBC, has tweeted “more than 20 times since the election” about the stock market, “extolling the market’s gains,” including this gem on Monday: “Stock Market has increased by 5.2 Trillion dollars since the election on November 8th, a 25% increase.”

The folks in Congress are heavily invested in the skyrocketing stock market, and unless they pass the tax cut, their gains could be eviscerated — that’s the warning that Treasury Secretary Steven Mnuchin has thrown their way in an interview with Politico.

Sure, everyone wants a tax cut – the lucky ones that get them. Especially since we no longer have to worry about how to pay for it. The reason we don’t have to worry about it anymore is because the ballooning US national debt has miraculously disappeared from the agenda.

Nevertheless, the kinds of tax cuts proposed by the White House are not a clear-cut deal in Congress, and like other proposals, it might sink into political quicksand.

So here comes the political weapon to force Congress to act: money.

Mnuchin told Politico that the surge in stock prices since the election is largely based on hopes that Congress would pass the tax-cut bill, and if it doesn’t, part of the recently obtained paper wealth could just evaporate. Not only would the folks in Congress see part of their wealth disappear, they’d also have to answer to their constituents who’d be in the same debacle.

So Mnuchin in the interview:

“There is no question that the rally in the stock market has baked into it reasonably high expectations of us getting tax cuts and tax reform done.”

“To the extent we get the tax deal done, the stock market will go up higher. But there’s no question in my mind that if we don’t get it done you’re going to see a reversal of a significant amount of these gains.”

So the tax-cut deal is “priced in, in anticipation,” he said. But there’s more good news: “I don’t think it’s priced in 100% certainty,” he said. “So I think the market will go up” if the deal passes. But if it doesn’t pass, duck for cover.

Politico interpreted the warning this way:

If that sounds like a threat to Republicans — and perhaps some Democrats — to pass a tax bill, that’s because it is. In fact, some analysts on Wall Street say that if a tax overhaul falters, a big correction on Wall Street could help push the legislative process back on track.

“If it suddenly looked like a tax bill was dead, stocks could sell off sharply. Then the blame game would begin,” said Greg Valliere of Horizon Investments. “I think Trump would hammer hard at Democrats, blaming their intransigence for a stock market sell-off. A half-dozen Democrats in the Senate, fearing a defeat next year, would waver.”

But really, there is nothing to worry about, according to Mnuchin, who gave an “absolute guarantee” that Trump would have the deal on his desk and sign it by the end of the year.

This is the same guy who earlier this year had promised that the tax-cut deal would be wrapped up and done by August, a deadline that came and went without anything but a continued surge in the stock market.

Trump is a little more sanguine about the timing of the tax-cut deal. “I would like to see it be done this year,” he told reporters on Monday. “But don’t forget it took years for the Reagan administration to get taxes done — I’ve been here for nine months. We could have a long way to go, but that’s OK.”

But the reality is this: The stock market doesn’t need a fundamental reason, such as increased after-tax earnings, in order to surge. Earnings, or more precisely earnings per share (EPS), are the primary fundamental reason that should drive stock-market valuations. But as this chart by FactSet shows, aggregate EPS (black line) for the S&P 500 companies have stagnated since August 2014 even the the S&P 500 index (blue line) has soared (click to enlarge, red marks added): 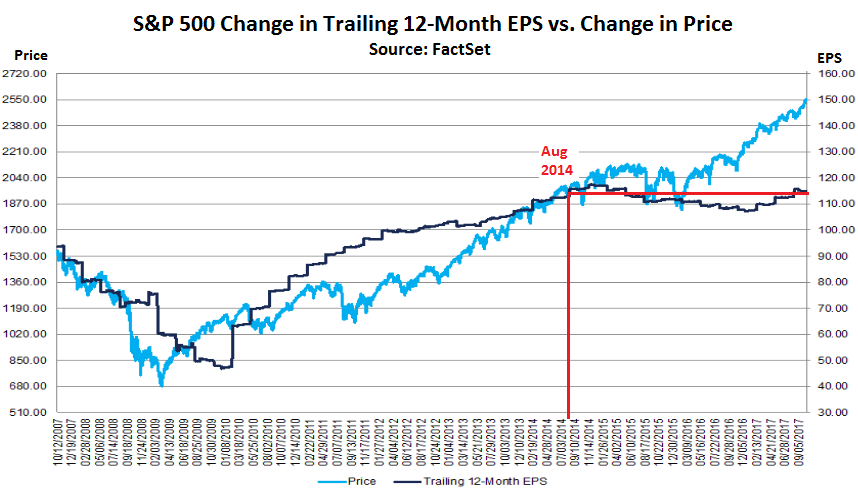 So what gives? We know that fundamentals no longer matter. And corporate tax cuts are part of the fundamental data set. When they didn’t happen in August, stocks didn’t blink. And if they don’t happen in December, that fact alone won’t crash stocks.

Something will eventually drive down stocks, but it won’t be a simple one-item fundamental thing. The fundamentals have been lousy for years, as the above chart shows. Instead, excess liquidity is trying to find a place to go. Investor enthusiasm is at record levels, volatility at record lows. Market powers have been lulled asleep on the certainty that nothing can go wrong anymore. But that “certainty” can change direction without notice, and to do so, it doesn’t need the failure of Congress to pass a tax bill. It’s going to do it when it’s ready and on its own terms. And then not even an Act of Congress can resurrect it.

Here are the numbers. Is this peak chase-for-yield by institutional investors? Read… Asset-Stripping by Private Equity Firms Is Booming