But there is no Financial Crisis. These are the boom times.

Given Americans’ ceaseless urge to borrow and spend, household debt in the third quarter surged by $610 billion, or 5%, from the third quarter last year, to a new record of $13 trillion, according to the New York Fed. If the word “surged” appears a lot, it’s because that’s the kind of debt environment we now have:

And given how the US economy depends on consumer borrowing for life support, that’s all good.

However, there are some big ugly flies in that ointment: Delinquencies – not everywhere, but in credit cards, and particularly in subprime auto loans, where serious delinquencies have reached Lehman Moment proportions.

Of all auto loans outstanding, 2.4% were 90+ days (“seriously”) delinquent, up from 2.3% in the prior quarter. But delinquencies are concentrated in the subprime segment – that $282 billion – and all hell is breaking lose there.

Subprime auto lending has attracted specialty lenders, such as Santander Consumer USA. They feel they can handle the risks, and they off-loaded some of the risks to investors via subprime auto-loan-backed securities. They want to cash in on the fat profits often obtained in subprime lending via extraordinarily high interest rates.

Of the $282 billion in subprime auto loans outstanding, finance companies originated 74%, according to today’s data from the New York Fed. Banks and credit unions granted the remaining 26%. 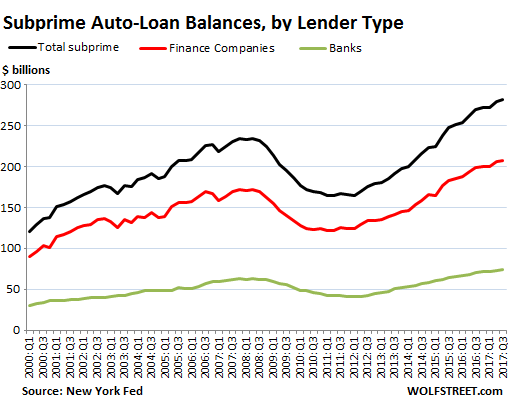 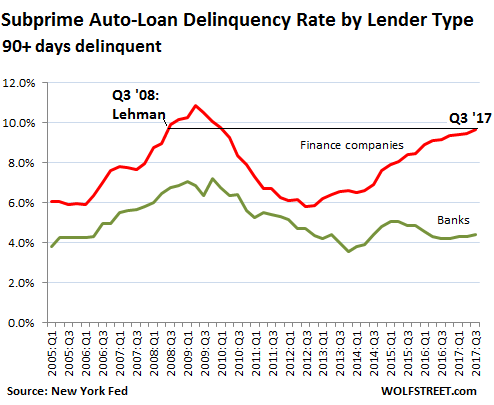 The chart above illustrates how banks have kept their subprime delinquencies under control. But not auto finance companies. The New York Fed explains, putting it mildly: “This suggests that bank auto loans may have some additional layers of underwriting – credit score alone does not explain the gap and divergence in the delinquency rates.”

The other way of explaining this phenomenon is that auto finance companies, after years of near-zero interest rates and excess liquidity, and thus an easy way to offload these loans by securitizing them, had practiced loosey-goosey underwriting standards, if any at all.

The next chart shows 90+ day delinquencies of borrowers with a credit score that is just above subprime (620-659). And they too have been deteriorating at finance companies since 2013. This impacts $155 billion in loans – $84 billion originated by finance companies and $71 billion by banks. The delinquency rate at auto finance companies of these loans has reached 3.2%, the highest since Q3 2010. And it first hit that rate on the way up in Q3 2008, the Lehman Moment: 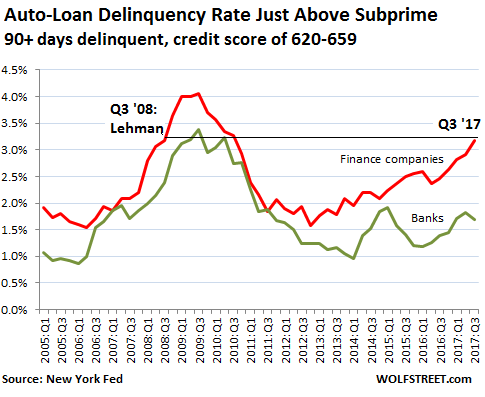 But here’s the thing: We compare these delinquency rates to those during the Financial Crisis and the Lehman Moment. But there is no crisis these days, just record stock markets, ultra-low interest rates, a booming bond market, and a growing economy.

Auto-loan delinquencies spiraled higher during the Financial Crisis because millions of people lost their jobs and couldn’t make their payments. Now employment has been rising for years. The unemployment rate has dropped to 4.1%, the lowest since December 2000. These are the boom times. And yet subprime auto loans at finance companies are blowing up like it was Q3 2008 all over again.

And this is not a good indication of what might happen when the economy turns south even a little.

Banks have gotten leery of auto loans. They have started to tighten lending standards for prime and subprime borrowers, and it shows. Read…  Next Phase of Carmageddon: the Banks.