About 40 million will be sold this year, and prices are rising.

Manheim, the world’s largest wholesale auto-auction company, reported that prices of used vehicles that went through its auctions jumped again in October. Its Used Vehicle Value Index – which is adjusted for mix, mileage, and seasonal factors – rose 1% from September and 8.1% from a year ago. It started rising in March, months before the hurricanes hit Texas and Florida. It has risen seven months in a row. It’s up nearly 10% from the low point in March. And it looks like this: 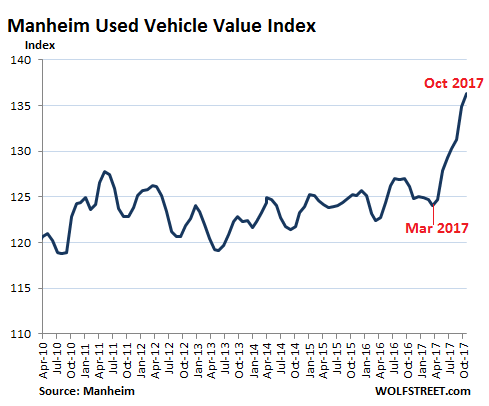 Prices in all its categories rose in October on a year-over-year basis:

Manheim ascribed the rising prices to two factors: One, strong retail demand; and recently the replacement demand after the hurricanes. This along “with a reduction in available supply has caused wholesale inventories to tighten,” it said. “The impact to the wholesale market was widespread, resulting in abnormal wholesale price gains for another month.”

Used-vehicle unit sales in October rose 3% year-over-year, according to Cox Automotive estimates. The Seasonally Adjusted Annual Rate (SAAR) of sales was 39.7 million vehicles in October and 41 million in September.

Vehicles less than four years old are the dominant category due to the influx of cars and trucks coming out of rental fleets that are typically one or two years old, and lease returns that are typically two to three years old. According to Manheim, so far this year in that segment, retail sales jumped 14%.

But it’s not so clear-cut.

Used vehicle retail sales in the third quarter, according to Edmunds, declined 3.2% year over year to 9.36 million units, from a record Q3 in 2016 of 9.67 million units. The report blamed the hurricanes, “as major markets in Texas and Florida both experienced a drop-off in sales.”

“This is largely due to the pipeline of low-mileage lease returns that continue to hit the used market in record numbers,” Edmunds said. As a result, “an overabundance” of these newer used models is “sitting on dealer lots for longer than older – and less expensive – models.”

These newer, low-mileage vehicles carry the highest price tags that represent the upper corner of the price spectrum, with pricing that rivals that of new vehicles. This presents the industry with a dilemma that is only primed to get worse. High levels of lease returns coupled with increasingly stringent mileage limits will feed an expanding pool of low-mileage used vehicle inventories that have proven to have a limited buying audience.

Thus the used inventory is “mismatched with demand,” Edmunds said. “While more consumers are searching for affordable transportation, the bulk of retail used inventory is made up of 3-year-old and newer used vehicles.”

The older higher-mileage units are selling like hot-cakes because they fit the budgets of used vehicle buyers. But lease returns are hitting the market “at unprecedented rates and will exacerbate the disparity between what is desired and what is available in the used market.”

Prices are rising faster at the low end: “Despite slightly stagnating values for newer vehicles, values are consistently higher for 10- to 15-year-old vehicles,” Edmunds said. “The age group represents slightly less than 10% of the sales share, but this pricing strength does help to buoy the overall values.”

Another voice, J.D. Powers’ Used Vehicle Price Index had been on the forefront for years with declines in used vehicle wholesale prices. The index dropped 13% from the peak in the spring of 2014 to the trough in the spring of 2017, with a good part of the plunge happening in late 2016 and early 2017. But in September (October data is not yet available) prices rose for the second month in a row, pushing the index up 3% from the low this year. It remains down 6.6% year over year.

So the consensus is prices are rising — but the degree is in the eye of the beholder. While any uptick will be good for the industry and may support new vehicle sales, it’s not going to be helpful for used-car buyers for whom a price that fits their budget is the primary consideration.

Banks have started to tighten lending standards for prime and subprime borrowers, and it shows. Read…  Next Phase of Carmageddon: the Banks.

36 comments for “What the Heck’s Going on With Used Cars and Trucks?”