Banks have started to tighten lending standards for prime and subprime borrowers, and it shows.

Banks are further tightening their lending standards for prime and subprime auto loans. This process started in Q2 2016, when auto lending had reached the apogee of loosey-goosey underwriting that had boosted sales of new and used vehicles to record levels and had ballooned auto loan-balances outstanding to the $1-trillion mark. It also boosted risks for lenders. Inevitably, subprime auto loans started running into trouble in 2016, and it was time to not throw the last trace of prudence into the wind entirely.

The chart below — based on data from the Fed’s Senior Loan Officer Survey on bank lending practices for the third quarter — shows the net percentage of banks tightening lending standards. The negative percentages below the red line signify net easing. It shows how loan officers have gradually, in fits and starts, dialed back their easing before Q2 2016 and ratcheted up their tightening after Q2 2016: 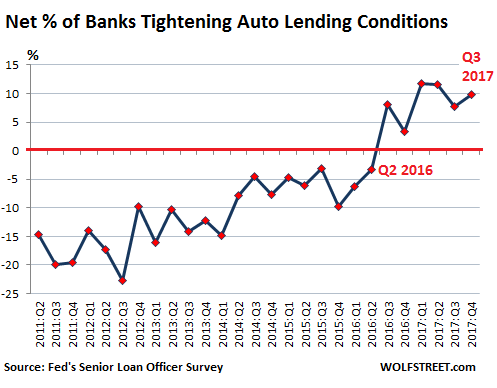 “Banks reportedly tightened most terms surveyed for auto loans,” the report says. Specifically, here are some of the terms the banks tightened in Q3, which adds to the banks that tightening in prior quarters:

Some of this tightening is already showing up in the data. For example, the average maturity of new-vehicle loans peaked in Q1 2017 at 67.4 months, according to Federal Reserve data. The data for Q3 is not yet available, but by Q2 the average maturity dropped to 66.5 months, the first major drop since 2011.

Note on the left side of the chart how the average maturity plunged during the Financial Crisis as credit was freezing up and as auto sales collapsed, and it was hard to get anything financed: 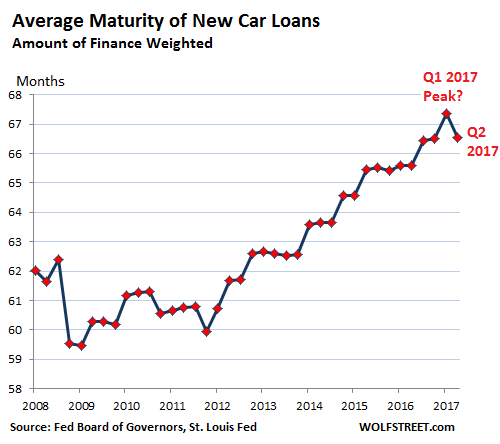 But the tightening hasn’t yet shown up in total auto loan balances outstanding, which jumped by $19 billion during the third quarter, likely boosted by the first batch of replacement sales from the hurricanes.

What has shown up is a massive adjustment of the data going back to Q4 2015. Since I keep the old data, I overlaid the prior unadjusted data (red line) and the current adjusted data (blue columns) in the chart below. The adjustment retroactively wiped out $39 billion in auto loan balances in Q4 2015. By Q1 2017, the adjustment had wiped out $41 billion: 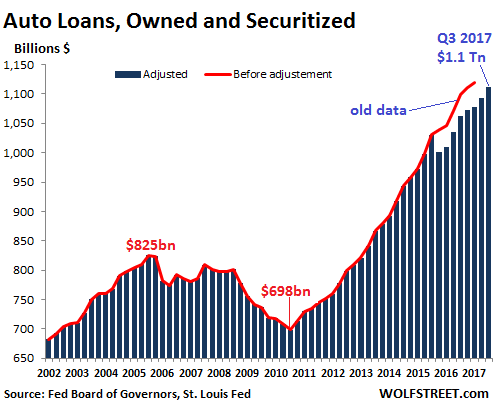 Adjustment of data happens all the time. These are estimates that can be off, and occasionally, adjustments are made to try to put them back on track. But it does show that auto loans did not suddenly plunge in Q4 2015, as the chart based on the blue columns alone would have otherwise indicated.

That banks are tightening their auto-lending standards ever so gradually is another headwind the auto industry is facing. The hurricanes, by destroying or damaging a few hundred thousand vehicles, created some temporary replacement demand for new and used vehicles, some of it financed by insurance companies.

This replacement demand is now papering over the underlying problems of the industry that are constraining demand:

And these headwinds will still be there after the replacement demand from the hurricanes settles down.

Carmageddon for Tesla, Fiat Chrysler, Hyundai, and Kia. But not for all automakers. Read…  Pickup Sales Boom, Cars get crushed, Tesla Deliveries Plunge

71 comments for “Next Phase of Carmageddon: the Banks”