Pending home sales in California fell in August from a year ago, the second month in a row of year-over-year declines, according to the California Association of Realtors, with the Pending Home Sales Index dropping 3.5% from a year ago, after having dropped 2.6% in July:

Pending home sales are notoriously volatile, but the pattern has now become well-established in the San Francisco Bay Area where pending homes sales have been plunging in the double digits year-over-year. And now Southern California is gravitating toward a similar pattern.

The drop-offs are large, and are becoming consistent. This turns pending home sales from an otherwise iffy observation into a worrisome indicator that home sales over the next few months will slow substantially compared to last year.

The biggest problem was the greater Bay Area, with pending home sales plunging 11.6% year-over-year, after having plunged 11.5% in July. It was the 11th month in a row of year-over-year declines. The counties of San Francisco, San Mateo, Santa Clara, Sacramento, and Santa Cruz all saw double-digit declines. Silicon Valley stretches across San Mateo and Santa Clara. 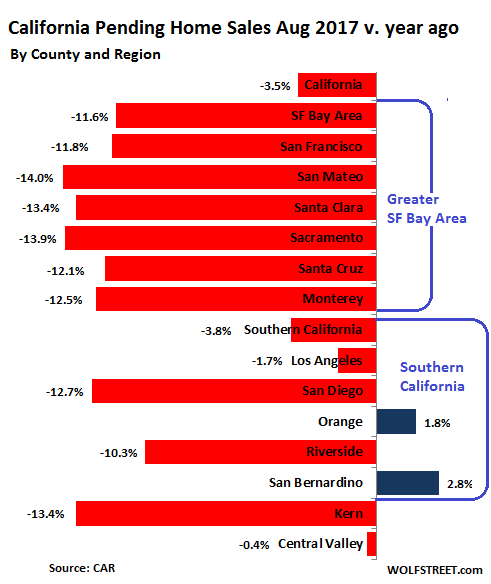 The report added that “continued housing inventory issues and affordability constraints may have pushed the market to a tipping point, suggesting the pace of growth will begin to slow in the fall.”

So how ludicrously high are home prices in the Bay Area compared to Southern California, where prices are already very high? (Data via the California Association of Realtors’ August report): 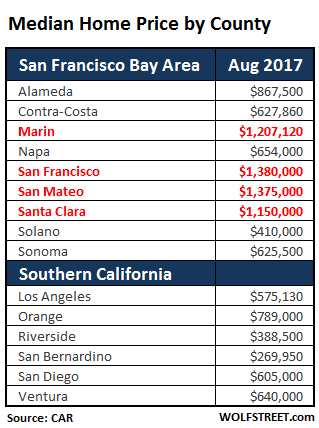 Even in a market with many high-paying jobs, such as the Bay Area, there are limits as to what kinds of prices this market can bear. The sky is not the limit. The first thing to react is sales volume – and within that category, pending home sales that will translate into actual sales over the next few months when most of these deals close. And it’s not a propitious signal.