In the land of NIRP refugees and “Reverse Yankees,” who will get crushed?

At the end of the week, something special happened, something totally absurd but part of the new normal: the average yield of euro-denominated junk bonds – the riskiest, non-investment-grade corporate bonds – dropped to the lowest level ever: 2.77%.

April 26 had marked another propitious date in the annals of the ECB’s negative yield absurdity: the average euro-denominated junk bond yield had dropped below 3% for the first time ever.

By comparison, what is considered the most liquid and safe debt, the 10-year US Treasury, carries a yield of 2.33%; the 30-year Treasury yield hovers at 3%.

This chart of the BofA Merrill Lynch Euro High Yield Index (data via FRED, St. Louis Fed), shows just how crazy this has gotten in the Eurozone: 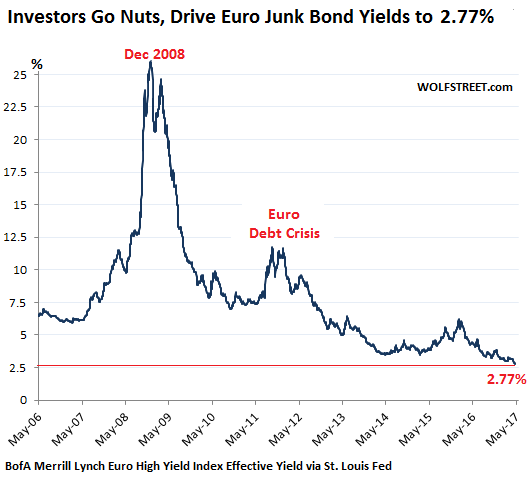 It’s not like there’s deflation in the Eurozone, despite rampant scaremongering about it. The official inflation rate in April was 1.9% for the 12-month period. As this chart shows, it’s not likely to go away any time soon (via Trading Economics): 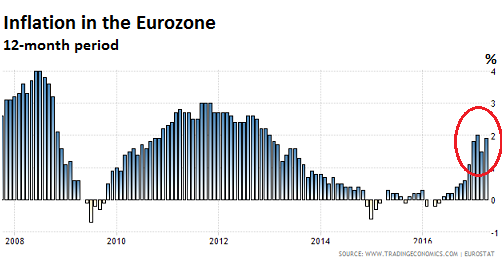 In other words, the average “real” junk bond yield (after inflation) according to the above two indices is now 0.87%. That’s the return bond-buyers get as compensation for handing their money for years to come to non-investment grade corporations – as per an average of the ratings by Moody’s, S&P, and Fitch – with an appreciable risks of default looming on the horizon.

Issuing junk bonds in euros is not just the prerogative of European companies. It includes issuance of junk-rated US companies that seek out this cheap money. “Reverse Yankees,” as these bonds are called, have become a large factor in euro-bond issuance.

And investors that accept a “real” compensation of only 0.87% per year to deal with these risks – have they gone nuts? You bet.

The Wrath of Draghi.

As part of its now reduced €60 billion-a-month QE program, the ECB buys government bonds, “covered bonds,” investment-grade corporate bonds, and asset-backed securities. It also cut its deposit rate to negative -0.40%. All of this with the explicit goal of driving up all asset prices and repressing all yields across the corporate and sovereign spectrum, from the best to the worst.

What the ECB doesn’t buy is junk bonds. That doesn’t mean it can’t end up with junk bonds on its balance sheet, if for example, a country or a company whose bonds it holds gets downgraded to junk.

As a result of the QE program and the negative-interest-rate policy (NIRP), numerous government bonds are now trading at a yield below zero. For example, the German five-year yield is -0.33%. This hounds investors with a return after inflation of -2.23%! Investors who seek any kind of positive return in euro-denominated bonds have to flee into riskier assets, such as junk bonds. Or they have to flee to other currencies, such as dollar-denominated bonds. These are the NIRP refugees.

Why are NIRP refugees risking so much for so little?

Many are institutional investors that have to buy euro bonds, such as life insurance companies and bond funds. Ultimately they don’t care because it’s not their money. It’s other people’s money (OPM). Institutional investors get paid to manage it. All they have to do is go with the market. If it blows up in their face, and everyone is in the same mess, they’re just fine. It’s OPM that blows up.

As the ECB buys more and more bonds, repressing yields in the process, investors have to bid against the ECB, further pushing down yields. But a central bank like that is special. It’s the relentless bid. It’s bidding high on purpose because the purpose is to drive up bond prices and push down yields. Institutional investors, such as pension funds and life insurance companies that have to buy bonds don’t have a choice. They have to play.

Someone is going to take the loss. When companies default on their debt, investors get stiffed – usually pension-fund beneficiaries and the like whose money this is. The OPM. They should have been compensated for taking this risk. What the Wrath of Draghi accomplished is that they are forced to take these risks without compensation.

So companies are issuing euro bonds no-holds-barred. From Spanish banks that have unleashed a flood of bonds to Mexico’s teetering state-owned oil company Pemex which sold a €4.3 billion of euro bonds in February.

But bonds aren’t like stocks. Bonds get redeemed (if they make it that long) at face value. If held to maturity, the only capital gains occur if the bond was bought at a discount. But in the current environment in which yields have plunged, bonds are acquired in the secondary market at a premium. But the premium evaporates as the bond gets closer to the maturity date. Traders and hedge funds can make a buck if they unload the bonds early enough and if yields continue to drop. But for institutional investors that hold bonds to maturity because their business model requires them to, there’s no good exit.

And that’s really crazy, what this central bank has wrought, when you think about it long enough.

Oh, and the unintended consequences of trying to regulate a monster. Read…  $500 Trillion in Derivatives “Remain an Important Asset Class”: Hilariously, the New York Fed