“One word, a question: Ethereum,” said the guy at my swim club on Sunday. “What do you think? It’s a ten-bagger since January.” Meaning that the value of the cryptocurrency has multiplied by ten in the four months since January 16.

Here is the chart of this financial miracle (via WorldCoinIndex): 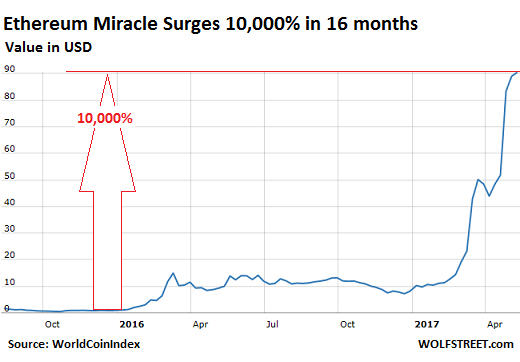 d of insane instability. But it really doesn’t matter what it is as long as it is going up.

By “market capitalization,” ethereum is now the second largest cryptocurrency at $8.4 billion.

The largest one is bitcoin with a “market cap” of nearly $30 billion. It’s the granddaddy of the cryptocurrencies. The value of a single bitcoin, at $1,789 on Sunday, is 46% higher than the value of one troy ounce of gold. In mid-May 2015, bitcoin was at $240. Over the two years since, it has soared 645% (via WorldCoinIndex): 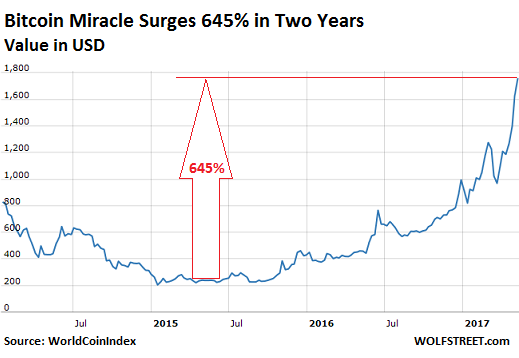 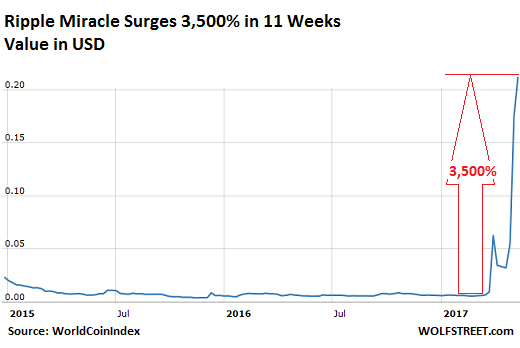 It’s not some kind of bad joke. This is being played with real money. That it will inflict maximum pain on the latecomers – whenever this happens – is now perfectly clear.

There are over 830 “alt-coins,” as the alternatives to bitcoin are called, out there, with new ones being added constantly. The “market cap” of all these cryptocurrencies combined, according to the Financial Times, has pierced the $50 billion mark. So this starting to involve serious money.

But there are a couple of issues with this miraculous scenario, according to the FT:

An increase in initial coin offerings (ICOs) – unregulated issuances of crypto coins where investors can raise money in bitcoin or other crypto currencies – is fuelling the market and drawing attention from lawyers and financial professionals.

Many fear ICOs, which are trying to market themselves as an alternative to venture capitalists as a way of raising cash for businesses, breach existing securities law.

“An ICO issues crypto tokens rather than stocks and bonds, but that’s irrelevant to the substance of the activity, which is raising capital from the general public,” said Ajit Tripathi, a director in fintech at PwC. “Capital raising activities need to be regulated to protect investors . . . The question is how sophisticated are these investors?”

Many of these investors may not be “sophisticated.” But others appear to be highly sophisticated, now that the sums involved have gotten big enough for them. The FT:

Observers say many individuals are trading alt-coins from corporate IT departments, concentrated in the financial sector and falling under the radar of senior executives. Many are sitting on virtual fortunes, but are unable to liquidate their cash as banks clamp down on measures to avoid money laundering.

“Systems are being used here by employees to increase their own individual wealth. In the process, corporate systems are coming into contact with the fringes of the criminal world,” Brian Lord, former deputy director for intelligence and cyber operations at the UK’s electronic espionage agency GCHQ and now head of cyber practice at security group PGI, told the FT.

Big sophisticated traders – including hedge funds and others – are in this trade, not because it might make some real economic sense, but because, as the charts above show, these things can be pushed up quickly with enough money involved. And if enough new people can be drawn in due to the ballooning hype, then the big boys can get out, once they figure out how to deal with the banks’ concerns about money laundering.

For now, the SEC and other regulatory agencies have turned mostly a blind eye, as they usually do. Later, when it’s too late, after considerable wealth has been transferred from those getting in late to those getting out in time, the SEC might get interested in it. And that act alone could reverse some of those charts above.

106 comments for “What the Heck’s Going on With Cryptocurrencies?”