Oh, and the unintended consequences of trying to regulate a monster.

Economists at the New York Fed included this gem in their report on a two-day conference on “Derivatives and Regulatory Changes” since the Financial Crisis:

Though the notional amount [of derivatives] outstanding has declined in recent years, at more than $500 trillion outstanding, OTC derivatives remain an important asset class.

An important asset class. A hilarious understatement. Let’s see… the “notional amount” of $500 trillion is 25 times the GDP of the US and about 7 times global GDP. Derivatives are not just an “important asset class,” like bonds; they’re the largest “financial weapons of mass destruction,” as Warren Buffett called them in 2003.

Derivatives are used for hedging economic risks. And they’re used as “speculative directional exposures” – very risky one-sided bets. It’s all tied together in an immense and opaque market interwoven with the banks. The New York Fed:

The 2007-09 financial crisis highlighted weaknesses in the over-the-counter (OTC) derivatives markets and the increased risk of contagion due to the interconnectedness of market participants in these markets.

This chart from the New York Fed shows how derivatives ballooned 150% – or by $360 trillion – in less than four years before the Financial Crisis. They ticked down during the Financial Crisis, then rose again during the Fed’s QE to peak at $700 trillion. After the end of QE, they declined, but recently ticked up again to $500 trillion. I added in red the Warren Buffett moment: 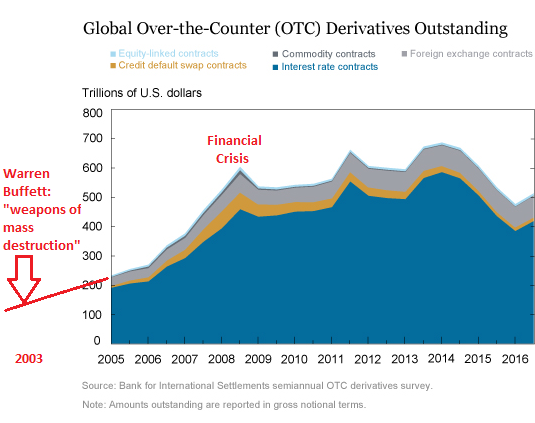 The vast majority of the derivatives are interest rate and credit contracts (dark blue). Banks specialize in that. For example, according to the OCC’s Q4 2016 Report on Derivatives, JPMorgan Chase holds $47.5 trillion of derivatives at notional value and Citibank $43.9 trillion. The top 25 US banks hold $164.7 trillion, or 8.5 times US GDP. So even a minor squiggle could trigger some serious heartburn.

In 2003 already, famously, when there were less than $200 trillion in derivatives outstanding, Warren Buffett, who himself doesn’t shy away from them, warned in Berkshire Hathaway’s annual report:

I view derivatives as time bombs, both for the parties that deal in them and the economic system. Basically these instruments call for money to change hands at some future date, with the amount to be determined by one or more reference items, such as interest rates, stock prices, or currency values.

Unless derivatives contracts are collateralized or guaranteed, their ultimate value also depends on the creditworthiness of the counter-parties to them.

But before a contract is settled, the counter-parties record profits and losses – often huge in amount – in their current earnings statements without so much as a penny changing hands. Reported earnings on derivatives are often wildly overstated. That’s because today’s earnings are in a significant way based on estimates whose inaccuracy may not be exposed for many years.

The errors usually reflect the human tendency to take an optimistic view of one’s commitments. But the parties to derivatives also have enormous incentives to cheat in accounting for them. Those who trade derivatives are usually paid, in whole or part, on “earnings” calculated by mark-to-market accounting. But often there is no real market, and “mark-to-model” is utilized. This substitution can bring on large-scale mischief.

As a general rule, contracts involving multiple reference items and distant settlement dates increase the opportunities for counter-parties to use fanciful assumptions. The two parties to the contract might well use differing models allowing both to show substantial profits for many years. In extreme cases, mark-to-model degenerates into what I would call mark-to-myth.

The derivatives genie is now well out of the bottle, and these instruments will almost certainly multiply in variety and number until some event makes their toxicity clear.

In my view, derivatives are financial weapons of mass destruction, carrying dangers that, while now latent, are potentially lethal.

That was in 2003. Five years later, it all came apart. Since the Financial Crisis, there have been some regulations globally to improve the functioning of OTC derivatives markets and manage “the risks associated with these products,” as the NY Fed’s report put it. But even today, there are still conferences on derivatives – for regulators to figure out how to regulate them, and for market participants to figure out how to get around these regulations. Hence “unintended consequences,” according to the New York Fed:

Some of the unintended consequences:

The report concludes with this zinger: “Possible further innovations to market practice and regulatory landscapes warrant consideration, given that OTC derivatives remain a significant part of the financial landscape.” Again, this hilarious understatement concerning the $500 trillion monster.