Commercial Property Bust to hit Multifamily Rentals in San Francisco & New York, the Most Expensive Markets in the World

Two reports – one on the most expensive rental markets in the world, and the other on the top multifamily “Sell Markets” in the US – have the same winners: San Francisco and New York City, where the dynamics have changed and, for landlords, are veering for the worse.

Of the 120 global cities researched by online property service Nested, the top three most expensive rental markets are San Francisco, New York City, and Boston. They easily blow away other global hot spots such as Hong Kong, London, Tokyo, Paris, Vancouver, and Toronto. After years of soaring rents in the US, eight US cities are among the 15 most expensive rental markets.

To measure affordability, Nested’s report compares the cost of rents per square foot. Based on the minimum recommended dwelling size for a single person (420 square feet or 39 square meters) and for a family of four (800 square feet or 74 square meters), the report calculates the minimum incomes required to be able to rent in these cities (with rents not to exceed 29% of gross salary). 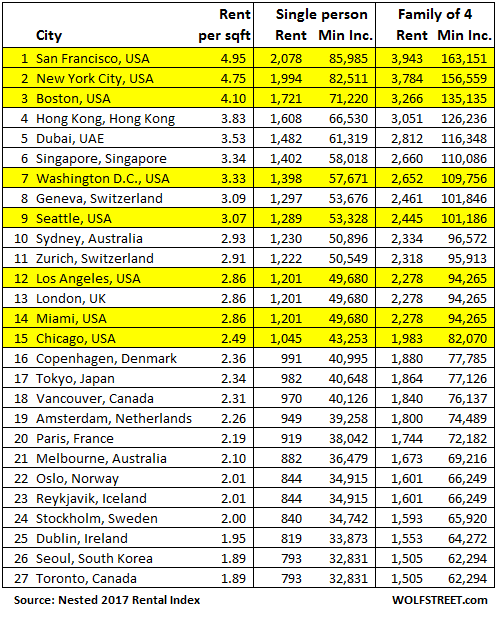 Since the table is in US dollars, exchange rates influence the rankings. But it’ll do for our purposes. Within the US, these three most expensive rental markets are the same in other reports I have cited. So there’s some rare agreement in the data. And in these markets, rents have begun to drop sharply, though they’re still soaring in Mid-Tier Cities.

San Francisco and New York have gotten so ludicrously expensive, and have so much new supply coming on the market, just as their economic growth has begun to slow, that they’re now the top two SELL markets for investors, according to Ten-X Research’s report and outlook.

In the US overall, the multifamily market is “still strong but fundamentals are weakening,” and some “face worrisome market dynamics.” The report summarizes:

As development rises, most markets will see vacancies creep higher, slowing rent growth. It appears the apartment cycle is drawing closer and closer to the end.

In some cities, the dynamics have soured. Expected rent declines through 2020 and surging vacancy rates are turning them, for landlords, into the “top sell markets”:

These multifamily properties are part of the vast commercial real estate bubble that the Fed is now confronting, with an eye on the banks that have made it possible. Various Fed governors and even Fed Chair Yellen have been voicing their fear of “waiting too long” to raise rates to cool it all down. Or of “having already waited too long?” Read…  Fed Frets about Commercial Real Estate Bubble & its $2 Trillion in Loans Mostly at “Smaller Banks”