The New York Fed, in its Household Debt and Credit Report for the fourth quarter 2016, put it this way today: “Household debt increases substantially, approaching previous peak.” It jumped by $226 billion in the quarter, or 1.8%, to the glorious level of $12.58 trillion, “only $99 billion shy of its 2008 third quarter peak.”

Yes! Almost there! Keep at it! There’s nothing like loading up consumers with debt to make central bankers outright giddy.

Auto loan balances in 2016 surged at the fastest pace in the 18-year history of the data series, the report said, driven by the highest originations of loans ever. Alas, what the auto industry has been dreading is now happening: Delinquencies have begun to surge.

This chart – based on data from the Federal Reserve Board of Governors, which varies slightly from the New York Fed’s data – shows how rapidly auto loan balances have ballooned since the Great Recession. At $1.112 trillion (or $1.16 trillion according to the New York Fed), they’re now 35% higher than they’d been during the crazy peak of the prior bubble. Note that during the $93 billion increase in auto loan balances in 2016, new vehicle sales were essentially flat: 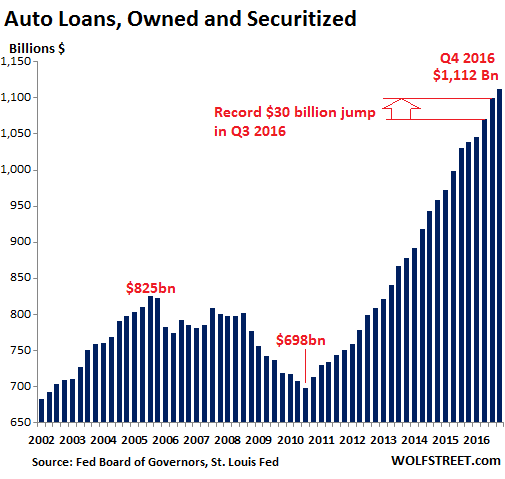 No way that this is an auto loan bubble. Not this time. It’s sustainable. Or at least containable when it’s not sustainable, or whatever. These ballooning loans have made the auto sales boom possible.

But despite record low interest rates, the bane of the automakers is now taking place relentlessly: 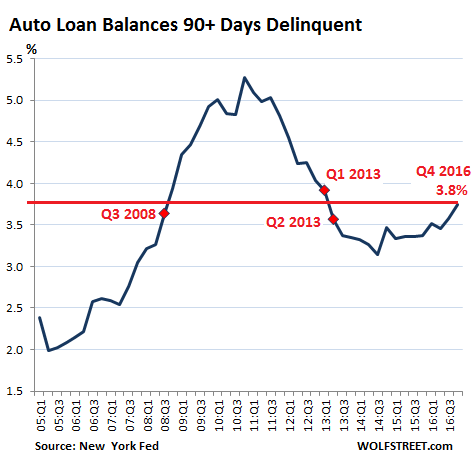 These seriously delinquent auto loans are an indication of what is next:

Some specialized subprime lenders might keel over. Larger lenders with good quality loan portfolios will bleed but go on while tightening their underwriting standards in order to weather the storm. And that’s precisely what the auto industry is dreading: tightening credit.

The auto boom over the past few years was funded by historically low interest rates and loosey-goosey underwriting, with long loan terms and high loan-to-value ratios, often over 120%. They made everything possible. But they infused the $1.1 trillion in auto loans with some very big risks.

The Office of the Comptroller of the Currency (OCC), one of the federal bank regulators, has once again warned about the risk-taking by auto lenders:

Auto lending risk has been increasing for several quarters because of notable and unprecedented growth across all types of lenders.

These factors increased the credit risk in auto loan portfolios…. This embedded risk is now being reflected in lower recoveries at charge-off (higher loss severities) for both bank loans and securitized auto loans despite relative stability in used auto values.

So it’s all there – the ingredients for bigger losses among banks and investors, a few failures of smaller specialized subprime lenders, and belated credit tightening, both out of necessity and due to lower competition among lenders as some of the most aggressive ones will be busy licking their wounds.

And auto sales – not long ago the truly hot sector in the US economy – are now confronted with these tightening credit conditions as growth has already been stalling.

Despite what you might think, automakers did not “cut back” on fleet sales in January. But keep an eye on rideshare companies. Read…  Car Sales Crash, But It’s Complicated