Record supply of LNG from the US and other sources. Record supply from Norway via pipeline. Conservation, power production shift… It adds up.

The price of natural gas futures in Europe continues to plunge off its crazy spike last summer. Dutch front-month TTF Natural Gas Futures – a benchmark for northwest Europe – traded today at €82 per megawatt-hour (MWh), down by 77% from the high on August 26, and back to where it had first been in September 2021 (data via Investing.com). 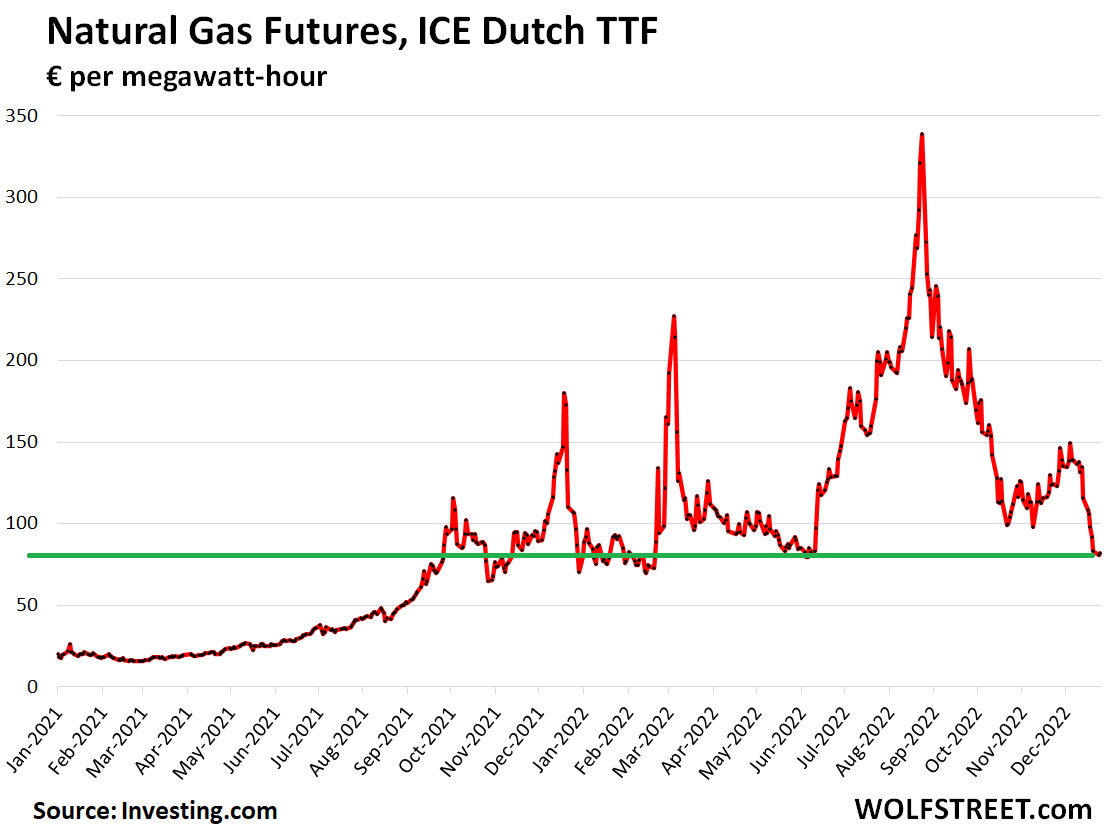 This plunge occurred amid a dual strategy in Europe: Reducing demand for natural gas and lining up new supply to replace pipeline natural gas from Russia.

The result on the supply side was a surge of LNG imports from the US and other parts of the world, that are offloaded via existing LNG import terminals and a growing list of floating storage and regasification units (FSRU).

And Norway, now the largest supplier of natural gas to Europe, increased its production by 8% from a year earlier, to record levels in 2022, according to estimates by Norway’s energy ministry in August. The gas is delivered via a network of pipelines.

And on the demand side, there are ongoing efforts by consumers and businesses to reduce consumption of natural gas and power, strongly motivated by the spike in energy costs. In addition, some power generation has shifted from natural gas to coal. Demand reduction was helped along by a relatively mild winter so far.

In an amazing feat in Germany, where construction delays of years are common, the first floating LNG import terminal and a 26 km long pipeline to the existing grid opened on December 17, after only five months of construction. How Germany could source and install the equipment and put 26 km of pipeline into the ground in only five months is a miracle. Similar miracles are in the works. When it comes to keeping the industrial powerhouse fueled, previously unimaginable miracles are being performed on a daily basis.

In the Netherlands, two floating LNG import and storage terminals entered operations in the port of Eemshaven in September. Others are in the works.

Capacity of these floating LNG import terminals is relatively small, but enough of them will add up, and supplement increased pipeline supplies from Norway and other parts of Europe.

The shutdown of natural gas supply from Russia is a particular and spicy issue for Germany, which had become recklessly dependent on cheap pipeline natural gas from Russia, dating back to the Cold War. Every Chancellor had to be supportive of enhancing this reckless dependency further. Gerhard Schröder took this dependency to a new level with the Nord Stream project. After he left office in 2005, he got cushy jobs at Russian state-owned energy companies, Nord Stream AG, Rosneft, and Gazprom. Germany is now trying to make his life miserable. And it’s finally weening itself off that dependency.

And Russia is out of a lot of money on the natural gas that it didn’t sell to Europe, because it cannot sell the natural gas to other customers because the pipeline system cannot be moved, and there are no LNG export facilities linked to these production sites.