Wait a minute… Why would anyone buy the shares at any price given that, after 23 years, Mobileye still loses a ton of money?

Intel’s effort to spin off a portion of Mobileye Global via an IPO is running into a sobering reality. Mobileye, which was founded in 1999 and originally went public via an IPO in 2014, before Intel acquired it in 2017 for $15.3 billion, sells a range of products and services to automakers for their driver-assistance systems and autonomous driving technologies. Tesla was once a customer until the relationship soured.

Intel had originally targeted a $50-billion valuation for the IPO, but it has now slashed its target for the valuation by 60%, to $20 billion, and plans to sell fewer shares than originally envisioned in order to drum up some interest to generate that pop when shares start trading, according to the Wall Street Journal Monday afternoon, citing sources. Intel also delayed the roadshow for investors to Tuesday.

Unlike the autonomous-driving SPACs we’re going to look at in a moment – Embark Technologies, Aurora Innovation, and Velodyne Lidar, whose shares are in my Imploded Stocks – Mobileye has substantive revenues: $1.4 billion in 2021; and $854 million in the first half of 2022, up 21% year-over-year. But it’s losing lots of money: It generated a net loss of $67 million in the first half, according to its S-1 filing with the SEC.

Which raises the question: Why is a company that was founded 23 years ago and has $1.4 billion in revenues still losing lots of money? What is the business model of these perennially money-losing companies? Why would anyone even buy the shares if after 23 years, the company still cannot make a profit?

Mobileye said that automakers are using its products in 800 vehicle models and that its System-on-Chips (“SoCs”) have been deployed in over 117 million vehicles.

Mobileye said in the S-1 that it intends to use a portion of the funds it will raise in the IPO to repay a still blank amount “of indebtedness owed to our parent company Intel,” and “any remainder” would be used “for working capital and general corporate purposes.” For now, the plan is for shares to start trading on October 26.

Intel will retain a big stake in the company, and it will get all of the Class B shares, each of which has the voting rights of 10 Class A shares that Mobileye plans to issue.

But all the ridiculous enthusiasm of 2020 and early 2021 for money-losing companies – a hallmark of the Everything Bubble – has leached out of the market. Recent IPOs have gotten crushed in this market.

The Renaissance IPO ETF, which tracks the 80 largest, most liquid recent US IPOs – with Snowflake, Airbnb, Rivian, Royalty Pharma, Palantir accounting for about 31% of the index – has plunged by 63.5% from its high on February 16, 2021 (data via YCharts): 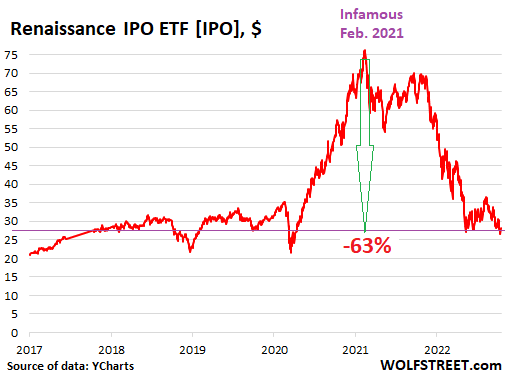 Still in March 2022, we were dished up amazing headlines by the financial pump media, such as: “3 Autonomous Vehicle Stocks to Buy Ahead of the Mobileye IPO,” and those three were autonomous-driving SPACs Embark Technology, Aurora Innovation, and Velodyne Lidar.

Embark Technology [EMBK], an autonomous trucking software startup, completed its merger with a SPAC in November 2021 at a valuation of $5 billion. As of its earnings report for Q2, it still had zero revenues and generated a net loss of $14 million. For the year 2021, it generated a net loss of $129 million. As of the end of June, it had $220 million in cash left to burn.

By the end of December 2021, the stock was beginning to collapse. In August 2022, just nine months after the SPAC merger, it was reduced to a penny stock. Threatened with getting delisted, it did a 1-for-20 reverse stock split (your 20 shares at $0.50 became 1 share of $10). And shares, with renewed room beneath them to drop, then continued to drop.

The 20-for-1 reverse stock split explains why the $10-per-share price before the SPAC merger in early November 2021 is now reconfigured as $200.

Today, its shares closed at $6.84. Without the 20-for-1 reverse stock split, this would have amounted to about 34 cents. But the reverse stock spilt kept the shares from getting delisted.

Since the high in December, shares have collapsed by 96%, and that $5 billion valuation at the SPAC merger has collapsed to a market cap of $157 million (data via YCharts): 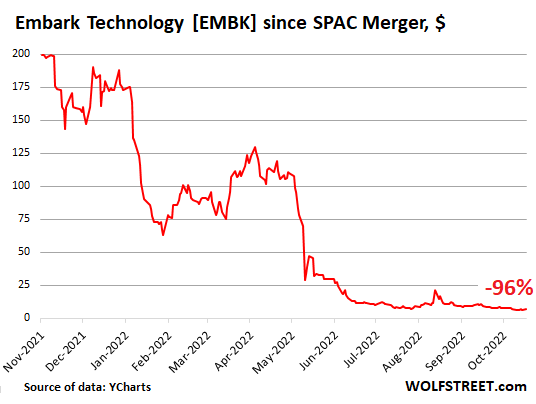 Aurora Innovation [AUR], which is into autonomous truck technology, completed the merger with a SPAC on November 4, 2021. Shares then suddenly, in three days, spiked 70%, from $10 to $17.11, to confirm to everyone that this was just a crazy sh*tshow. By the end of January, shares had collapsed to $4. Today they closed at $2.16, down 87% from that high 11 months ago. Dip buyers who bought the rallies got their faces ripped off. But so be it, dip buyers take risks.

In Q2, the company booked $20 million in revenues, down 50% from Q1, generating a net loss of $1.15 billion with a B. Over the past two-and-a-half years for which financial reports are publicly available, the company generated $2.2 billion in net losses.

But it’s not going to run out of money right away, though it’s working on it diligently. At the end of Q2, the company still had over $1.3 billion in cash and short-term investments (data via YCharts): 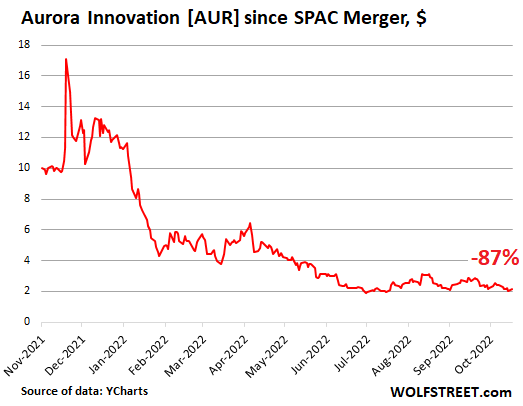 Velodyne Lidar [VLDR], which makes lidar technology, was spun off from Velodyne Acoustics in 2016 and obtained a $150 million investment from Ford and Baidu that year. The merger with a SPAC was completed in September, 2020. This was still the crazy-time, and so shares then spiked to $29.70, which gave the company a market cap of $4.6 billion.

On February 7, 2022, with shares down to $3.80, the stock price suddenly spiked by 50% when Amazon agreed to invest in the company and get warrants for 40 million shares. And that blew over too. Today shares closed at $0.94, down 97% from the high, and the market cap has shriveled to $205 million.

In Q2, the company had $11 million in revenues – remember, it used to have a market cap of $4.6 billion, in a market driven by buffoons – and generated a net loss of $44 million. At the end of Q2, it had $229 million in cash and short-term investments, enough fuel for one to two years (data via YCharts): 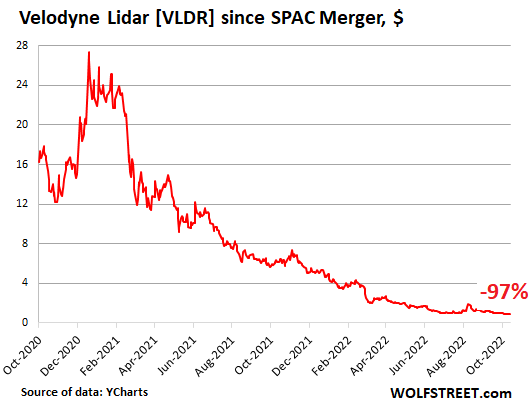