Earning 4% without taking on credit risk would in normal times sound like a great deal. But these are not normal times, and the rate of inflation is over twice that rate. The Fed has stepped back from the markets for Treasury securities and mortgage-backed securities as part of its QT, and it has raised its short-term policy rates to over 3%. Treasury yields are now 4% or higher for maturities of one year to five years.

And banks are now having to compete with that, and are now offering “brokered” CDs at rates above 4% across maturities of six months to five years. For yield investors and savers, if they take advantage of those rates, their money is getting wiped out by inflation only half as fast as it would be wiped out in their regular bank account. But if you have to borrow money, such as to buy a house, that’s now getting a lot more expensive.

Treasury securities: 1-year to 5-year maturities at 4%-plus.

The 6-month Treasury yield today inched up to 3.9% at the moment, the highest since November 2007, up from near 0% less than a year ago: 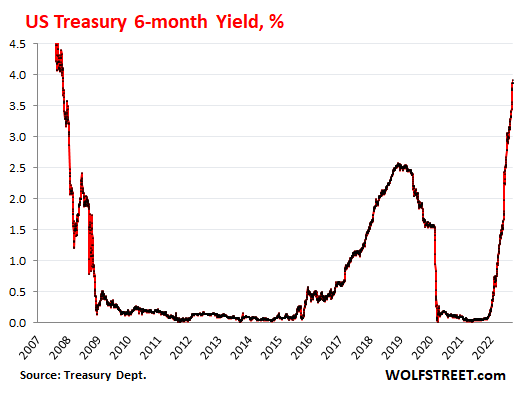 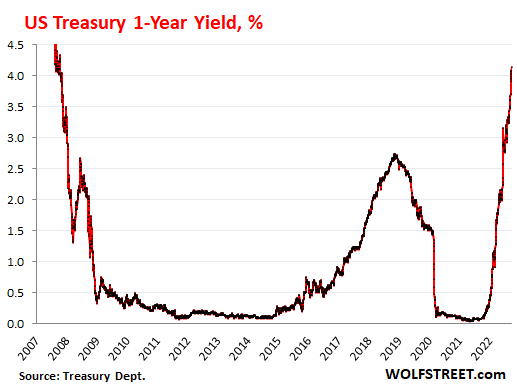 The two-year yield started rising at about this time last year, as it began pricing in the Fed’s “pivot.” By the end of 2021, it had risen to 0.73, when the Fed’s policy rates were still at near 0%. But the Fed had already started “tapering” its asset purchases and was talking about rate hikes in the future. 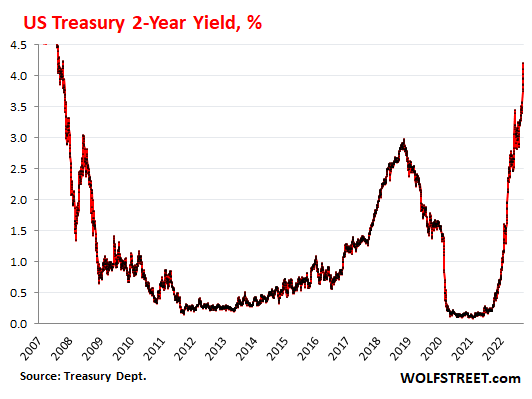 The 5-year Treasury yield nudged up to 4.0% at the moment, just barely there: 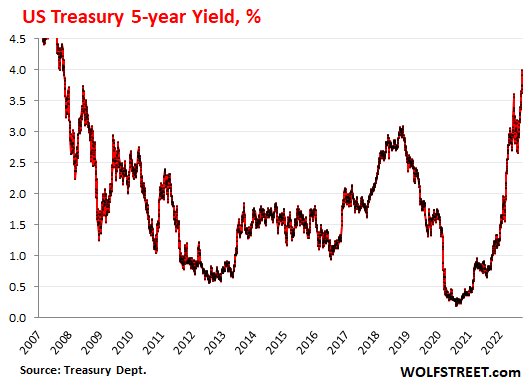 Buying Treasury securities is now easy. People can buy them through their broker in the secondary market or sometimes at auction. And people who open an account at Treasurydirect.gov can buy them directly at auction from the government.

And the yields that Treasury securities with maturities of up to five years are offering is what banks have to compete with if they want to attract new cash.

So banks are starting to compete for deposits. And they’re doing it with “brokered” CDs, which are FDIC-insured CDs that banks don’t offer their existing customers (they still get near 0%), but offer to new customers through brokerage accounts where these CDs can be purchased like stocks.

Banks offer these CDs through brokers, and not to their own customers, because they don’t want to pay all their existing customers 4% interest on their deposits, but they only want to pay 4% on the new money that they attract, while they continue to pay their loyal customers near 0%.

For banks, brokered CDs are a form of “hot money” that comes and goes, unlike regular bank deposits, which tend to be stickier.

So I checked with my broker today. And this is what they offer in terms of brokered CDs. These are the highest bank interest rates I have seen since 2008:

Some CDs are “callable” and might offer a higher rate but with the risk of being “called” if interest rates drop. It’s good to check so that there are no surprises.

The average 30-year fixed mortgage rate jumped to 6.70% today, according to daily measure by Mortgage News Daily. This is the most immediate measure we have of the mortgage market.

The weekly measure by Freddie Mac, released on Thursday, and based on mortgage rates earlier in the week, jumped to 6.29%, the highest since November 2008.

But Freddie Mac’s weekly average was based on mortgage rates in effect before Wednesday afternoon — before the Fed announced a 75-basis-point rate hike and projections of an additional 125 basis points in rate hikes this year, which could bring its short-term policy rates to around 4.4% by the end of 2022.

For people who took out mortgages in the 1980s and early 1990s, something like a 6.7% rate might still seem fairly low, or incredibly low, given that inflation is over 8%, but home prices are now in the ionosphere, inflated by years of the Fed’s interest rate repression and QE, including the Fed’s purchases of mortgage-backed securities. And financing a home at those ionospheric prices today at 6.7% is an entirely different affair than financing a home in the 1990s at this type of interest rate. 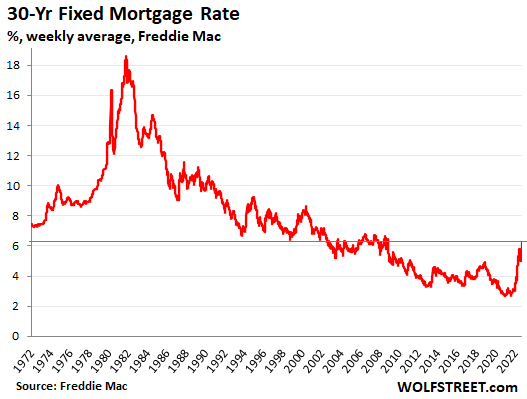 210 comments for “To Compete with Spiking Treasury Yields, Banks Now Offer 4%+ on “Brokered” CDs of 6 Months to 5 Years”