I assume all the fine print was copied and pasted into every document that no one read, and that no one is going to jail because this is just a funny clown show that peaked in February 2021, after which the whole thing fell apart as these hype and hoopla stocks have plunged by 80% or 90% or more. That any of these outfits found folks eager to buy their shares is proof of the mind-boggling intensity of the Consensual Hallucination that reigned back then.

In 2021, there were still lots of stragglers out there that hadn’t merged yet with a SPAC or hadn’t yet gone public via IPO, and even as many of the SPAC and IPO stocks were already collapsing for all to see, new money had to be found to allow the stragglers to get out too.

One of them was an EV outfit with still no car and no revenues, but with a ridiculous pile of problems, maddening disclosures, investigations, whistleblowers, and internal revolts: Faraday Future Intelligent Electric Inc.

It started trading as a public company in July 2021, and this morning, 14 months later, its shares dropped below $1, having become the hobby of day traders that are shuffling them back and forth amongst each other.

Faraday Future announced with enormous hype and hoopla in January 2021, at the hype-and-hoopla apex, that it would go public via merger with a SPAC. The merger was completed in July 2021 when the SPAC’s stock ticker was changed to represent Faraday Future Intelligent Electric [FFIE].

This is funny because on April 20, 2021, as I was already reporting on the Imploded Stocks, I posted an article titled, The WTF Charts of the EV SPAC Hype Boom Are Imploding Spectacularly. Even though Faraday hadn’t become a publicly traded company yet, it already featured in this article. This is what I wrote about the outfit on April 20, 2021:

“There are a number of other EV startups being currently hyped to the public while they’re being acquired by SPACs.

“Faraday Future is the most infamous one of them. The company was founded in 2014 by a Chinese entrepreneur who filed for bankruptcy in 2019 in the US to deal with $3 billion in debts. The company, which has failed in everything and never sold a single car, plans to go public by being acquired by the SPAC Property Solutions Acquisition Corp, at a $3.4 billion valuation.

“Faraday is now being hyped all over the place. But buying those shares is only attractive if you know that they’re going to be whipped to another silly WTF moment, which is the moment to dump the shares into the lap of some befuddled greater fool that thinks that the share price could multiply again before it’s time to dump them.

“But Faraday would be a great opportunity for potential investors to dig in their heels and go on buyers’ strike, and let someone else get crushed trying to bail out the current investors, promoters, and creditors. Let them eat cake.”

You see how funny this stuff is? On February 1, 2021, days after the announcement of the merger, the shares of the SPAC hit their intraday high of $20.75.

By the time the SPAC merger was completed and the shares began to trade under the new ticker [FFIE] on July 22, 2021, the price had already come down. But in the morning of that day, shares “popped” 9% to $15.02, according to Barron’s, which added to the hype-and-hoopla with its article titled, “Faraday Future Stock Is Popping. Here’s Why,” wherein it explained what makes Faraday such a hot company. And the stock has collapsed ever since. 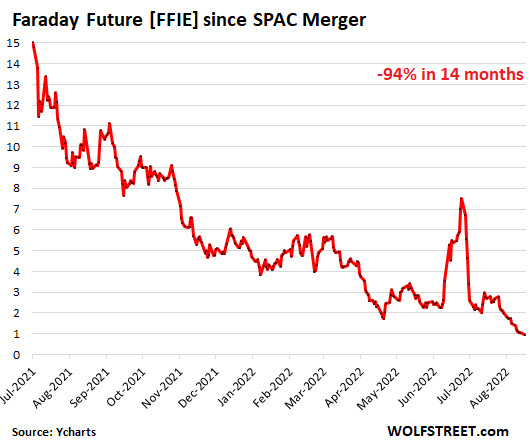 So the company is in a pickle.

And there’s an in-house revolt brewing: In a letter dated August 23, reported by Reuters a week ago, 140 employees called for the removal of Executive Chairperson Susan Swenson. They alleged that Swenson had organized attempts to “push the company into bankruptcy and restructuring.”

According to Reuters, “The group also asked the board to make public the findings from an ongoing investigation of multiple whistleblower letters concerning four directors – Sue Swenson, Jordan Vogel, Scott Vogel and Brian Krolicki.”

Also in August, FF Top, the largest shareholder of FFIE with a 36% stake, called for a special meeting to remove Brian Krolicki from FF’s board. And on and on.

Meanwhile, FF is entangled in all kinds of financial, regulatory, and legal issues.

In SEC filings, the company disclosed:

Inaccurate financial disclosures: In November 2021, the Board established a special committee “to investigate allegations of inaccurate Company disclosures.” The Special Committee hired legal counsel and a forensic accounting firm “to assist in its review.” The Committee found among other things that “certain statements made by or on behalf of FF in connection with the PIPE [Private Investment Public Equity] Financing were inaccurate.”

It added that “There can be no guarantee that the Special Committee investigation revealed all instances of inaccurate disclosure or other deficiencies, or that other existing or past inaccuracies or deficiencies will not be revealed in the future.”

“If FF is unable to continue as a going concern, it may have to seek protection under applicable bankruptcy laws and/or liquidate,” it said.

Then PwC quit as auditor, wreaking further havoc on FF’s efforts to raise cash. The company announced in August that its auditor PwC had decided to not be its auditor anymore. The company is now shopping for a new auditor.

This is funny because without auditor and audited financial statements, raising new cash to burn gets even more difficult for a company with no revenues and no car and a slew of problems after already providing inaccurate financial disclosures.

The SEC is investigating. The company disclosed that “FF, certain members of the management team and FF employees received a notice of preservation and subpoena from the staff of the SEC stating that the SEC had commenced a formal investigation relating to the matters that were the subject of the Special Committee investigation beginning in October 2021.”

Class action lawsuits have commenced, a bevy of lawsuits were filed, seeking class-action status, starting in December 2021, alleging violations of the Securities Exchange Act, “various common law claims,” and “breaches of fiduciary duties.” Among the defendants are FFIE, its current Global CEO, its former CFO, its current Chief Product and User Ecosystem Officer, the CFO of Legacy FF, the former CFO of FF, the Co-CEOs of the acquiring SPAC (PSAC), current and former officers and directors of FFIE.

You cannot put this kind of stuff off and sell it to the public unless the market is dominated by consensual hallucination.

98 comments for “EV SPAC Faraday Future Breaks the Buck, 14 Months after Going Public. Consensual Hallucination Was so Bad it Was Funny”