Home prices in Sydney and Melbourne – among the world’s most glorious housing bubbles –– are tanking, after inflation in Q2 hit 6.1% and is expected to go higher in Q3, and after the Reserve Bank of Australia hiked rates by 175 basis points since May, including 50 basis points in August, to a still minuscule 1.85%. And look what housing is doing: It not only failed as the much-hyped hedge against inflation, but it’s tanking.

In Sydney, home prices plunged by 2.3% in August from July and by 5.9% over the past three months, according to CoreLogic. Since the peak in January, the Home Value Index has dropped 7.4%.

And shockingly, home prices are now down by 2.5% from August last year. I mean, what kind of horror show is this?

This chart shows the price changes on a rolling three-month basis for the big five capital cities (chart via CoreLogic): 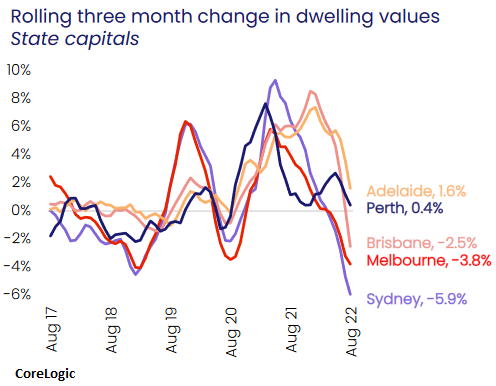 On a month-to-month basis, home prices fell in seven of the eight capital cities. Only Darwin hung on with a gain.

Over the three-month period, five capital cities have now booked declines, including Brisbane, which joined the club in August.

“It was only two months ago that the Brisbane housing market peaked after recording a 42.7% boom in values [since the beginning of the pandemic]. Over the past two months, the market has reversed sharply with values down 1.8% in August after a 0.8% drop in July,” CoreLogic said.

In Sydney, sales plunged by 35% over the three-month period through August compared to the same period last year; in Canberra sales plunged by 19%, and in Melbourne by16%, according to CoreLogic estimates. Across Australia, sales dropped by 15%.

Going into the normally busy spring and summer season, “we are expecting to see less buying activity as higher interest rates and low sentiment continue to weigh on demand. Should this scenario play out, the net result will be an accumulation of advertised supply that could further weigh down values,” CoreLogic said.

And suddenly there’s plenty to choose from: “Sydney and Melbourne, where the housing downturn is more advanced, are already seeing total advertised stock rise to above average levels, and there is a good chance the other capitals will follow suit as listings rise through spring and demand continues to taper,” CoreLogic said.

Across the eight capital cities, the number of homes listed for sale was up by 11% from a year ago. New listings over the past 28 days in the capital cities where well above the prior three years, but down from 2018 (chart via CoreLogic): 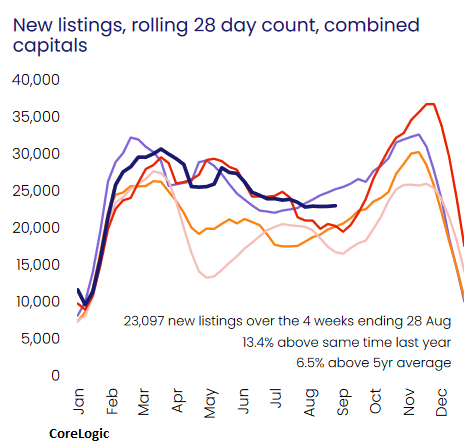 But not panicking yet.

This downturn comes after ridiculous price gains, driven by the RBA’s QE and interest rate repression. Price spikes from the beginning of Covid to the respective peaks earlier this year, according to CoreLogic data:

Across the eight capital cities, “a 15% peak to trough decline would roughly take CoreLogic’s combined capitals index back to March 2021 levels,” CoreLogic said.

In addition, buyers made down payments and paid down principal with their mortgage payments, which further increases their equity. And “the risk of widespread negative equity remains low,” CoreLogic said.

So no biggie – if the home-price declines stop magically at 15%.

Not everyone is so sanguine.

Shane Oliver, chief economist at AMP Capital, a global investment manager headquartered in Sydney, told ABC News that this downturn may be the end of a 25-year housing boom.

“Residential property price downturns in the last 25 years have mostly been mild, with prices falling less than 10%, and brief, with prices quickly rebounding to new record highs as rates fell to new lows,” he said.

“This cycle may be different – both in terms of being deeper and taking longer to recover – thanks to a combination of high household debt levels, high home price to income levels, and an end in the long-term downtrend in interest rates,” he said.

If the RBA’s policy rate is raised to 4%, as the money market is projecting, he said, “this would more than double household interest payments and push total mortgage repayments to record highs relative to incomes and likely drive a 30% or so fall in prices.” But OK, it sure was fun while it lasted.