Employers added 315,000 workers to their payrolls in August, and 1.13 million over the past three months – solid growth.

Wages rose again, but a tad less sharply. The number of unemployed people actively looking for work ticked up from July, but July had been the lowest level since the year 2000 at the peak of the dotcom bubble.

This jump in the labor force comes as the S&P 500 index is down 18% from its high at the beginning of the year. The Nasdaq is down 28% from its high in November. Many of the most speculative stocks, crazy meme stocks, and SPAC and IPO zombies have collapsed by 70% or 80% or even over 90%, hundreds of them, some of which I report on in my Imploded Stocks column.

Most cryptos have collapsed by 70% or more, and some have essentially vanished. DeFi crypto exchanges and lending platforms have filed for bankruptcy and taken their clients’ fiat and cryptos with them. It has been a nightmare out there for people exposed to this stuff.

These are the kinds of high-risk blood-pressure-raising adventures that lots of people embarked on during the pandemic, and initially made lots and lots of money with, often life-changing amounts of money that allowed them to just rest on their laurels and live off their gains, and not have to return to the daily grind.

The labor force has been stubbornly constrained for all kinds of reasons, including that people could afford to not go back to work because their most speculative bets were making huge amounts of money very quickly, and many figured that this would somehow keep going, having fallen prey to their own hype-and-hoopla show.

The labor force jumped to a record in August, finally.

There has been lots of thinking on what it would take to bring these people back into the labor force. And maybe a big selloff would do the job, as it has been surmised many times, and maybe we’re starting to see some of it.

The labor force jumped by 786,000 people in August, after wobbling for months, to 164.75 million, finally inching past the pre-pandemic high of February 2020, and setting a new record: 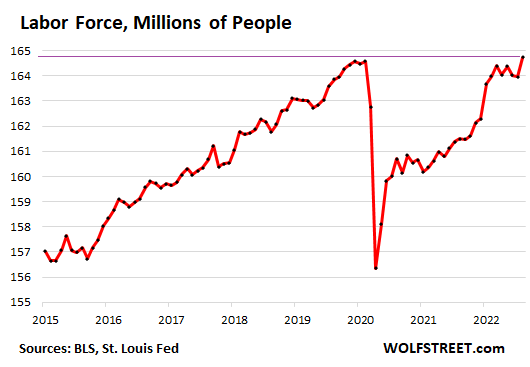 Lots of logical reasons have been cited why the labor force had gotten stuck at these low levels for so long, rather than recover: The difficulty and expense in finding daycare; the need to care for elderly relatives; the excess mortality since 2020; health problems; ageism where, even in a labor shortage, a 35-year old refuses to hire a 60-year old; etc. etc.

On that long list is also the large wave of “retirements” by people who can afford to “retire” thanks to the huge gains on their most speculative bets.

But then, enough of those speculative bets went south hard enough for long enough, and suddenly the labor force jumped as people started looking for a job again? It’s starting to look like it.

The labor force participation rate, which measures the labor force as a percent of the working-age population 16 years and older, has been woefully low, and had refused to recover. But in August, it jumped to 62.4%, which is still below the pre-pandemic years, but it’s a big step up from July and reversed several months of declines: 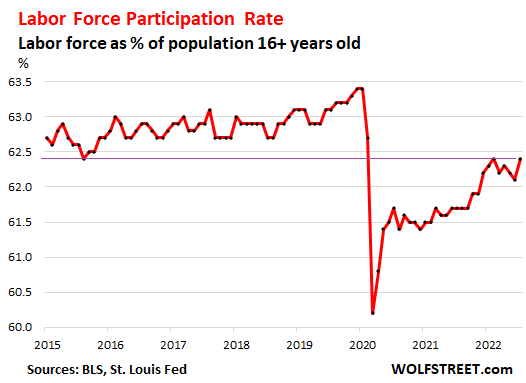 The prime age labor force participation rate – people between 25 and 54 years old, the most dynamic and crucial portion of the labor force – jumped to 82.8%, the highest rate since November 2019.

For people aged 25 to 54, the labor force participation rate is now higher than in the Good Times before the pandemic, except for the three months from December 2019 through February 2020, indicating that younger people have moved into the work force. In other words, the rate has fully recovered to Good Times levels, and that’s very good news for the labor market that needs them: 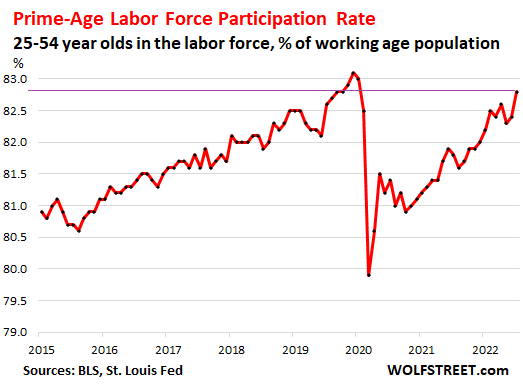