Okta was founded in 2009, went public in April 2017, and isn’t a newbie startup anymore. But last night, it reported another huge net loss for its second quarter ended July 31, of $210 million, on $452 million in revenues. Its losses have increased every year since it started disclosing them seven years ago and now total over $2 billion.

But since the infamous February 2021, when the hype-and-hoopla show came unglued, these types of stocks began to plunge, and I started tracking them in my Imploded Stocks column. Today Okta joined the club that already has hundreds of members. And it did so with flying colors. Its shares [OKTA] kathoomphed 35% so far today, to about $59 at the moment, back where they’d first been in August 2018, and down by 80% from the peak in – you guessed it – February 2021 (data via YCharts): 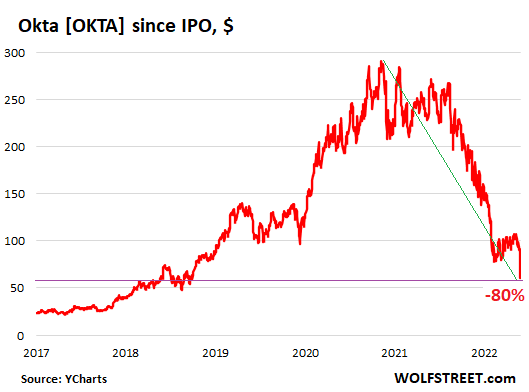 Okta, which sells services to companies that allow their employees to securely access corporate cloud-based systems, has been following the Silicon Valley dictum of using investor money to buy revenue growth – 42% revenue growth in Q2 – no matter what the costs, because the stock price will keep rising if revenues grow, regardless of the net losses because growth-befuddled investors will ignore net losses and focus on some homemade metrics and revenue growth, according to this dictum.

This formerly sacred and now rotting business model worked for years: Okta’s shares shot higher from its IPO price of $17 to its first-day close of $23.51, for a 38% first-day pop, and then shot higher from there to ultimately $294 intraday on February 12, 2021, before it all came unglued. And it has so far generated over $2 billion in net losses doing just that, with no end in sight.

Today’s plunge of the stock – just the latest in the 16-month implosion – ostensibly occurred because the company lowered its guidance for its billings and revenues for the rest of the year.

During the earnings call (transcript via Seeking Alpha), executives blamed the lowered guidance mostly on “sales challenges,” “integration challenges,” and “sales attrition” related to Auth0, which Okta had agreed to acquire on March 3, 2021, during peak hype-and-hoopla, for $6.5 billion in stock.

The acquisition was just another way in which Okta attempted to buy revenue growth. And now the deal isn’t working out so well.

CEO Todd McKinnon blamed “challenges related to the integration of the Auth0 and Okta sales organizations” in part for the cut in guidance. “I recognize we have more work to do to regain our momentum. We’ve taken some decisive actions that we believe will get us back on track,” he said.

CFO Brett Tighe blamed the cut in guidance on “sales integration challenges” and on “heightened sales attrition, which resulted in a lower-than-expected capacity build as we move through the year,” and added that “a smaller portion” of the blame for the reduced outlook is “related to the macro environment.”

And as you’d expect when an earnings call takes place while the stock is kathoomphing in the background, there was a lot of linguistic hilarity, including about the huge net losses.

No one during the earnings call – particularly not the analysts – made any fuss about the net loss in the quarter, or the prior net losses. On the contrary, CEO Todd McKinnon said, “We produced better than expected profitability” – the term “profitability” having replaced the unpleasant term “net loss” – and the analysts ran with it.

Other executives chimed in about “improving our profitability outlook,” etc. etc., meaning that they want to reduce the net losses from huge and growing to hopefully slightly less huge and declining.

Alas, for Q1 and Q2 of the company’s fiscal year 2023, it lost $453 million, a 17% bigger net loss, I mean bigger profitability or whatever, than in the same period in 2021. Its net losses, I mean profitability or whatever, have increased every year since it started disclosing them with fiscal year 2016 (ended January 31, 2016) now totaling over $2 billion, including the $848 million last year and the $453 million in the first half of this year (fiscal 2023): 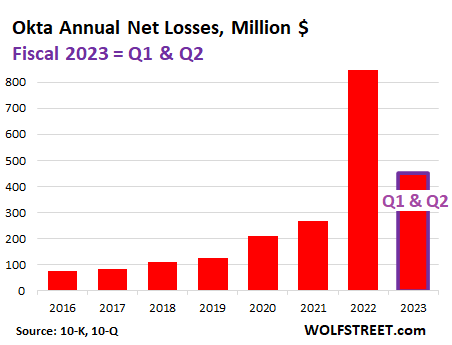 Trying to get these losses under control, now in this new environment, means layoffs. Okta has started the process, as many of the other companies on my Imploded Stocks list have done. But as with the other denizens on that list, the scale of the layoffs is still minuscule.

Last week, Okta’s head of global sourcing, Jody Simon, announced on LinkedIn that the “entire US Sourcing Team at Okta has been eliminated.” Later Okta confirmed that 24 people were laid off, around 0.4% of its total global workforce. So that’s not going to cut costs by a whole lot, but it shows that they’re now grappling with the end of an era.