“Temporary” inflation is suddenly runaway inflation. But the negative-interest rate idiocy and QE are finally over.

Inflation in the Eurozone jumped to 9.1% in August, a new record in the Eurozone data going back to 1997, according to preliminary data released today by Eurostat. It topped out at 25.2% in Estonia. Germany hit at a record 8.8%. 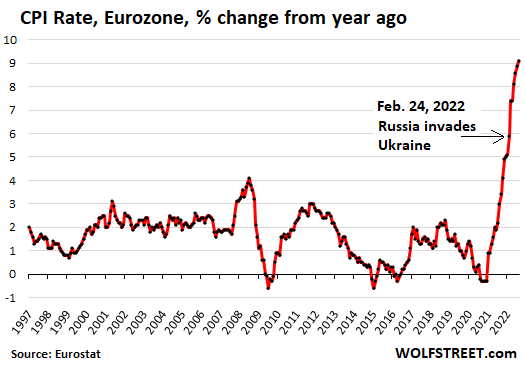 This spike of inflation started suddenly in early 2021, after years of ECB money-printing that turned into a mania during the pandemic, and after years of the ECB’s negative-interest rate idiocy. For years, it seemed the ECB would get away with these policies without creating runaway inflation, and then suddenly in early 2021, the dam broke, and inflation washed over the land.

At the time, the ECB regurgitated the Fed’s line that this inflation was just temporary, and it unhesitatingly continued with its negative-interest rate idiocy and printed money with reckless abandon.

Energy prices had already started surging in January 2021. From early January 2021 through December 2021, crude oil prices jumped by over 50%. That was a huge price gain.

By January 2022, just before Russia’s invasion of Ukraine, the Eurozone inflation rate had shot to 5.1%. In Germany, it also shot to 5.1%, in Belgium to 8.5%. Two Baltic states were already in the double-digits. Inflation had become a global problem, after years of global money printing and interest rate repression.

The majority of the 9.1% spike in inflation occurred before Russia invaded Ukraine. This was then made worse going forward by the energy price spikes, including natural gas, brought about by Russia’s invasion of Ukraine and by the sanctions in reaction to that war.

And inflation has continued to surge with price increases spreading across the economy.

Governments applied different strategies to more or less artificially push down the inflation rate. And this has kept the CPI lower (at 9.1%) than it would have been without those measures.

For example, in Germany, the government cut fuel taxes and in June began a program of a €9-per-month transportation pass as part of its Energy Cost Relief Packaged that allowed people unlimited travel on rail systems, buses, and trams across the country, which came in handy during the summer travel season, but also for commuting. That program, which contributed to a dip in CPI in June and July, ends today. September CPI will have to make do without it. 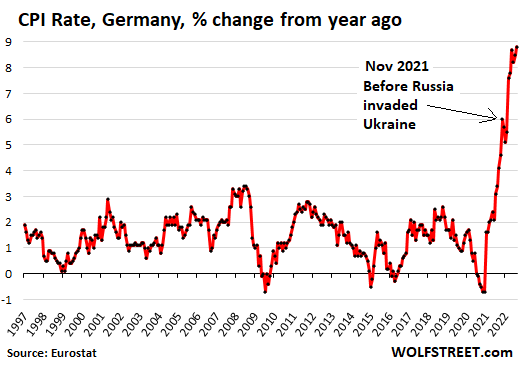 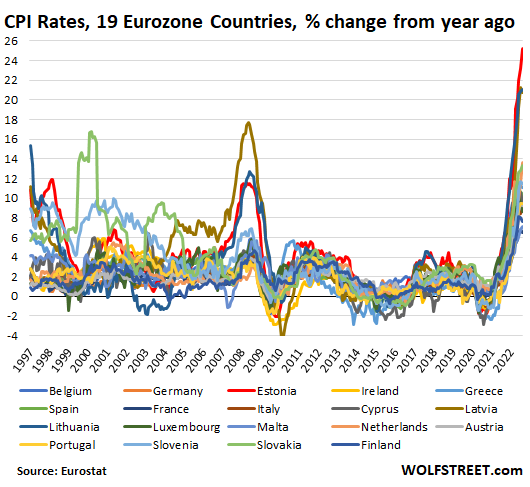 Even the ECB sees it’s presiding over an inflation freak-show.

The ECB was ridiculously reckless in its QE and negative-interest-rate policies. But both have now ended.

QE ended in June when its balance sheet topped out at €8.84 trillion in total assets. By its most recent balance sheet, as of August 26, total assets at €8.75 trillion, were down by €86 billion from the peak: 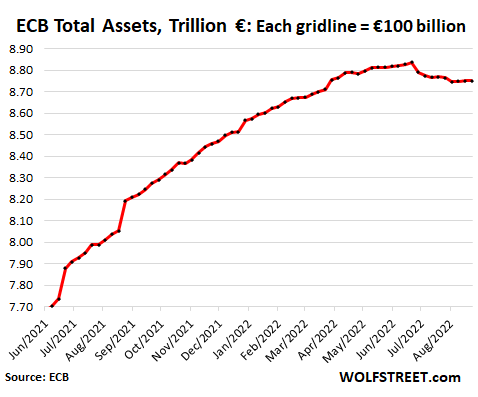 And yes, it sounds just as ridiculous as it is that a central bank finally raises its policy rate to 0% to deal with 9.1% inflation. It’s a horribly bad joke gone awry.

But the rate hike marked the end of the absurd and destructive experiment of negative interest rates. And more rate hikes are to come, starting in September possibly with a 75-basis-point hike. Even the ECB understands somewhere at some distant vague level that runaway inflation is a massive problem for an economy and the people and businesses in it. 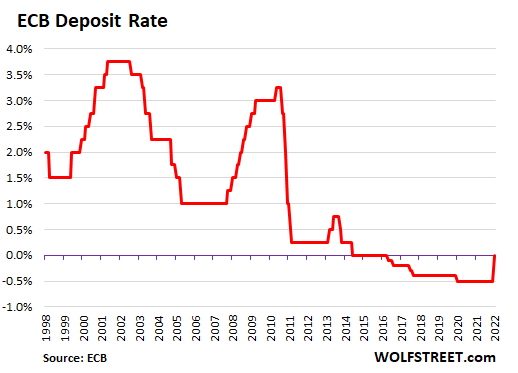 197 comments for “Runaway Inflation in the Eurozone, which Kicked Off in mid-2021, Sets New Record, Wakes Up even Ridiculously Reckless ECB”