Over the decades, recessions were preceded by spikes in unemployment claims. We keep our eyes on them as the recession watch has begun.

But they were a far cry from the mass layoffs of 15,000 or 20,000 people by company, the way they occurred one after the other in prior recessions.

And most people that got laid off found new jobs very quickly. There are still large-scale labor shortages that are in the news because of the problems they cause, such as the teacher shortage, the shortages of all kinds of staff in the healthcare sector, the shortages of pilots, flight attendants, and ground crews at airlines that have produced massively aggravating snarls and flight cancellations this summer, and on and on.

The most immediate measure that we have of a deterioration in the labor market is the data on unemployment insurance, which the Department of Labor releases weekly. Over the decades, significant and lasting spikes in initial unemployment claims were associated with recessions, and preceded recessions, and so we watch them closely when the recession watch begins.

The number of people filing a new claim for unemployment insurance dipped to 243,000, seasonally adjusted, the second week in a row of declines, according to the Department of Labor. These initial unemployment claims were a little above the historic lows earlier this year but were still in the range of the strong labor market before the pandemic: 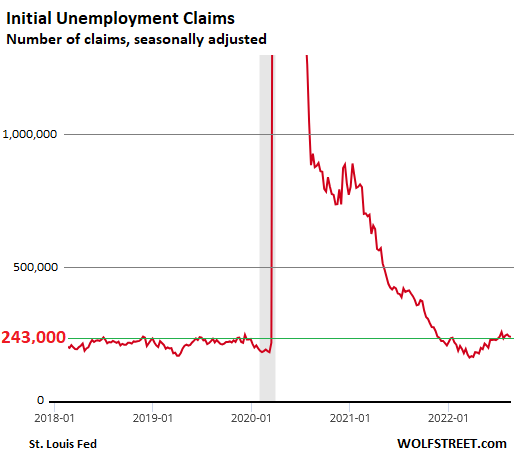 Looking back over the decades, all the way to the double dip recession in the early 1980s, we can see how low today’s initial unemployment claims still are compared to recessionary periods (grey areas) and the periods leading up to the recessions.

Historically, initial claims rose into the 350,000+ range before there was enough weakness in the labor market for a recession. 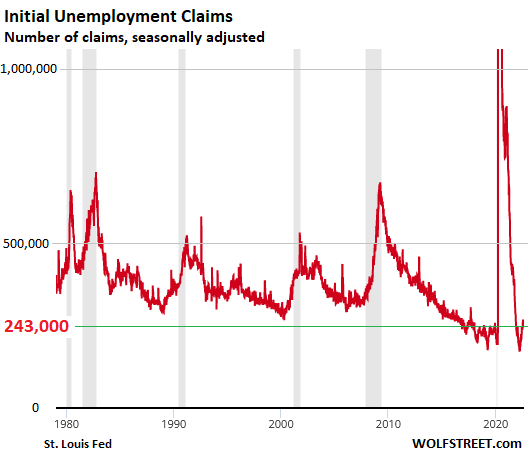 The number of people that continued to be on unemployment insurance after the initial claim – “insured unemployment” – dipped in the latest week by 19,000 to 1.415 million (seasonally adjusted), just a tad above the historic lows in May, and still near those historic lows, and far lower than during any other period. This shows how strong this labor market has been, starting in the second half last year – when “labor shortages” became a thing – through today: 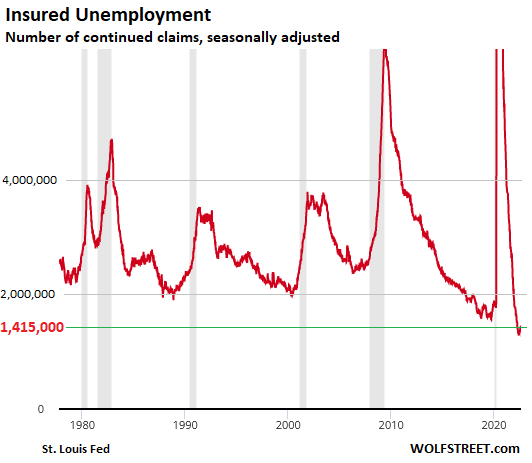 What this tells us.

So we see that there has been a slight increase in unemployment claims, such as from layoffs, but they’re up from historic lows and are still historically low; and that insured unemployment is still right at historic lows.

What this tells us is that the labor market is still very strong; and that most people who are laid off are able to land a new job quickly, or already have a new job lined up before they leave their old job, and they either don’t stay on unemployment insurance long because they start working again, or never bother to file for unemployment insurance because they walked out from the old job into the new job.

This also shows up in consumer spending: Consumers, though they’ve gotten hammered by this raging inflation, have been able to outspend this raging inflation. This morning, the revised GDP data for Q2 was released, including its inflation-adjusted measure of consumer spending (personal consumption expenditures), which rose 1.5% annualized from the prior quarter, an up-revision from the initial report (1% annualized).

We can see the impact of this raging inflation, and it’s hammering consumers, and it’s putting them into a foul mood, but they’re still outspending it (personal consumption expenditures, adjusted for inflation, expressed in 2012 dollars, part of today’s GDP revision): 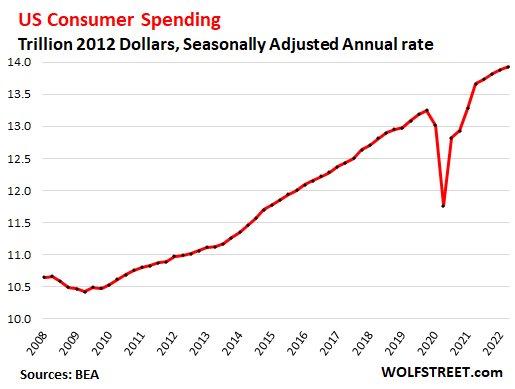 183 comments for “Recession Watch: This Labor Market is Not There Yet, Nor Are Consumers”