The median price of single-family houses in the San Francisco Bay Area peaked in April and has dropped every month since then. By July, the median price, at $1.33 million, was down by about $220,000 from the peak and by 2% year-over-year, undoing most of the huge gains in 2021 and early 2022.

In San Francisco itself, the median price of single-family houses also peaked in April – at $2.06 million, according to the California Association of Realtors. And then it sagged, and then it plunged. In July, it hit $1.68 million. Median prices are volatile from month to month, and they’re easily skewed by a change in the mix of what sold, and by other factors, so we need to be careful here. But this is nevertheless a huge plunge at the wrong time of the year. 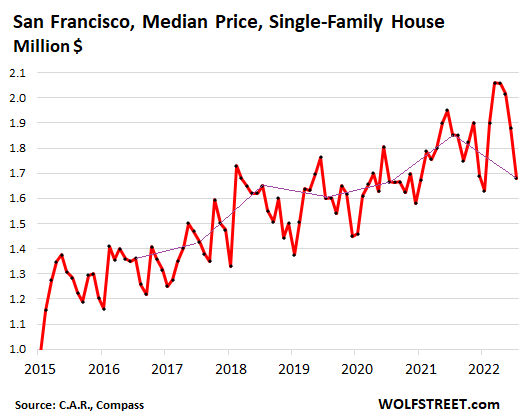 “These changes vary in degree by county and market segment – and monthly data can be volatile, fluctuating according to a wide variety of factors, including market seasonality – but the direction of these shifts is near universal,” Carlisle said.

The spike in mortgage rates to over 5% is tough for homebuyers to digest, and for home sellers to adjust to, and it’s tough for them everywhere.

But San Francisco, with its focus on tech and startups, has become heavily dependent on venture capital funding, and on SoftBank’s funding, and on the hiring by these and other companies, with employees getting huge salaries and fantastical stock options, and all this has become dependent on booming stock and crypto prices. So here we go:

Prices of the most speculative assets have plunged, such as cryptos and stocks that recently had their IPOs or SPAC mergers. Many of these stocks of companies that are headquartered or were headquartered in San Francisco have collapsed by 70% or 80% or 90% and have made it into my Imploded Stocks column. And more broadly, despite the blistering summer rally, the Nasdaq is down 21% from its November high.

The funding of startups has fizzled, particularly the huge amounts that SoftBank used to throw willy-nilly at Bay Area startups, at valuations that turned them into instant pop-up unicorns. But SoftBank got waylaid by the plunge in stocks and disclosed a gazillion dollars in losses on its investments so far this year, and then shut off the money spigot.

Venture Capital firms have pulled back from funding the craziest stuff as the exits via IPO or via merger with a SPAC that they rely on to cash out have been barricaded by the brutal collapse of many of these stocks.

Working remotely and corporate move-outs have left the previously bustling Financial District and the South of Market area a shadow of its former self. According the Savills, 26% of the entire office space in the City is on the market for lease, which is huge. Among the big cities, only Dallas/Fort Worth and Houston are in worse shape.

New housing units have been added at a rate of 2,000 to 4,500 every year. All of them have been multifamily, as no single-family housing has been built in over a decade. Density in the city is growing, and huge areas are being redeveloped. This includes Candlestick Point/Hunters Point Shipyard, Treasure Island, Parkmerced, Potrero Power Station, and others, most of which are industrial wastelands, some of them decorated with nuclear contamination from the US military during the Cold War, the cleanup of which has become its own forever soap opera of scandals. Tens of thousands of housing units are planned for these areas.

But much lower home prices would solve a host of big economic and business issues in the Bay Area – including the entire phenomenon called Housing Crisis.