Freight volume is down from the red-hot levels last year, but remains relatively high, after the grotesquely overstimulated demand last year.

The thing about American consumers is that they were supposed to splurge on goods during the stimulus era in 2020 and 2021, when free money washed over the land, and when spending on many discretionary services collapsed. And they did. Spending on goods exploded, particularly durable goods, in a record historic spike amid grotesquely overstimulated demand. But spending on discretionary services – airline tickets, lodging, rental cars, music and sports venues, elective healthcare services, etc. – collapsed.

Then with the re-opening of those discretionary services, consumers were supposed to shift back from buying goods to splurging on services, which was widely predicted, and even the Fed used it as one of the reasons why inflation in goods was going to be “temporary.” And consumers did splurge on services, and they are still doing it – see the travel nightmare that has unfolded at airports as airlines weren’t able to deal with the flood of travelers.

The growth in spending on services, even adjusted for raging inflation, has been strong. Services account for 62% of total consumer spending.

Spending on services, adjusted for raging inflation, rose by 0.3% in May from April and by 4.7% year-over-year. Spending for June won’t be released until late July. And as consumer spending shifted to services, spending on goods was supposed to fall, adjusted for inflation, and it did fall but has remained above pre-pandemic trend.

On Friday, we got retail sales for June, which is what retailers report – not what consumers report – and retailers reported surprisingly good sales in June. Everyone knew that raging inflation was going to take a bite out of it, and everyone knew that consumers were shifting their spending back to services, and so hopes for retail spending had been low, but in June consumers did blow a surprisingly large amount of money at retailers.

Another measure of the goods business in the US is shipment volume – but for the overall economy. Shipment volume is tracked by the Cass Freight Index, which covers all modes of transportation, but is centered on trucking, with truckload shipments representing over half of the dollar amounts, rail in second place, and less-than-truckload shipments in third place, followed by parcel services, and others. But it does not include bulk commodities.

The Cass Freight Index for shipments in June (red line) was down 2.3% from the red-hot June last year. This was the third month in a row of year-over-year declines, after the 2.7% decline in May and the 0.5% decline in April – relatively modest declines from a very strong year. And May and June 2022 still beat May and June 2019 (gray line). 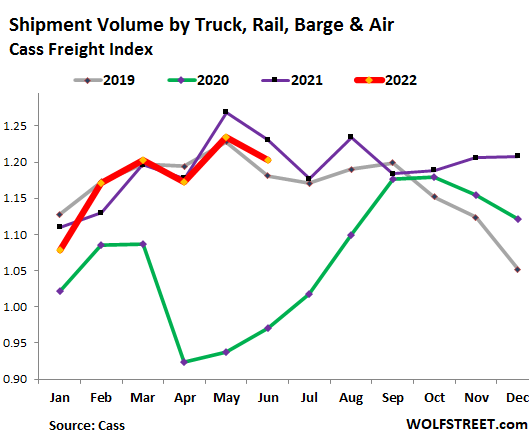 The huge plunge of shipment volume during the lockdowns in April 2020 (green line) was followed by a rapid recovery. By October 2020, shipment volume already exceeded October 2019 and the gap widened into the holidays of 2020. In 2021, shipment volume continued to boom, and over the last few months of 2021 didn’t even go into the seasonal decline, but just kept rising. That’s how huge the demand for goods was – one of the reasons supply chains got tangled up.

Everyone predicted that this boom in goods would eventually decline and return to trend as consumers shifted spending back to services – but shipping volume didn’t decline by much.

There are now reports of some shipping costs edging down, after huge increases. But the Cass Inferred Freight Rates Index – which includes freight rates and fuel charges – after dropping in May, jumped again in June to a new record. Year-over-year, the index was up 28%. Part of the spike over the past 12 months was due to spiking fuel costs.

But shippers – such as retailers and manufacturers – haven’t felt the decline of the spot rates because the fuel costs had spiked. Fuel prices have now turned around, and if diesel prices continue to drop, as they have done in recent weeks, eventually, it may translate into lower shipping costs for shippers. 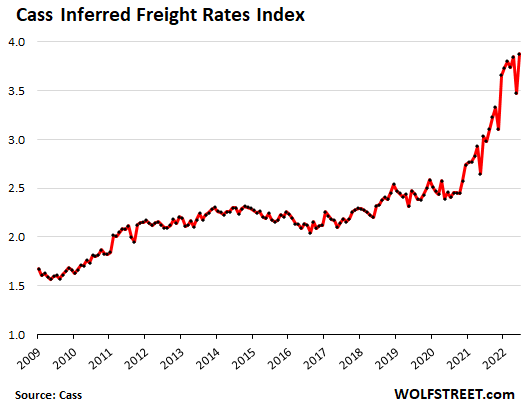 Spending on durable goods still surprisingly strong, even after inflation.

What we’re seeing is that the goods-based economy is backing off just a little from the grotesquely overstimulated demand in 2021. But it hasn’t backed off as much as expected, thereby frustrating the Fed’s vision of “temporary” inflation, as consumers continued to splurge on goods, even as they shifted spending back to services – with the big spenders still flush with huge gains from stocks, cryptos, real estate, the two-year boom in cash-out refis, and sharply higher incomes. 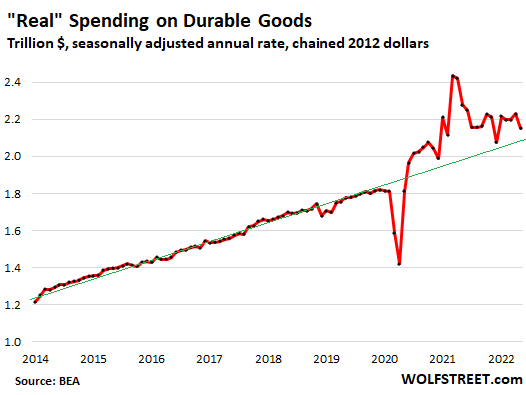