Bed Bath & Beyond has become another imploded meme stock. Meme stocks are a phenomenon that will go down in history as one of the grandest, most dazzling, most media-savvy pump-and-dump schemes that peaked in January and early February of 2021 – yes that infamous February 2021, when the stock market came unglued beneath the surface.

Today, Bed Bath & Beyond [BBBY] reported earnings and fired its CEO that had coddled up to the meme stock crowd. And its shares, after having already plunged in recent months, plunged by another 24% to $4.99 at the close.

In the two years through March 2020, the stock traded between $4 and $18. Then the meme stock traders ganged up on it and pushed the shares to an intraday high in January 2021 of $53.90. Over these 10 months, the stock gained about 1,000%. It sure was fun. While the meme stock crowd was jubilating in victory, the instigators dumped their shares, and the whole scheme collapsed, now by 91%, wiping out the entire 1,000% meme-stock gains, and thereby earning a spot in my Imploded Stocks column (data via YCharts): 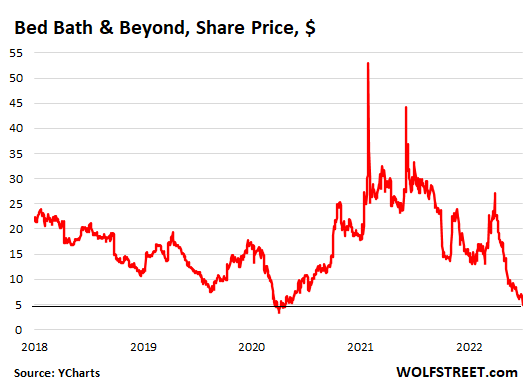 Meme stocks are companies that had been struggling for years, often losing money for years, and they’d been going to heck in bits and pieces, such as GameStop and Blackberry and Bed Bath & Beyond, when suddenly after March 2020, they came to the attention of meme stock traders.

Flush with stimulus cash and PPP loans and extra unemployment money or whatever, and empowered by the Robinhood trading app and the idea that they were changing the world, folks ganged up in the social media on a few specific stocks, often those that had been heavily shorted for obvious reasons — they were going to heck for all to see.

And these meme-stock traders, accompanied by hedge funds that bet with them, whipped each other into frenzy on the social media, and whipped these shares to crazy highs often in hours, and then the instigators dumped their shares at huge profits, and those shares collapsed, and the rest of the folks ended up holding the bag.

These were classic pump-and-dump operations, carried out much more effectively on the modern venues of the social media, rather than in the boiler-rooms of yore.

As Americans shifted their purchases to ecommerce over the years, countless brick-and-mortar chains filed for bankruptcy and were liquidated, even the biggest, Sears. Bed Bath & Beyond has a significant ecommerce presence, but it doesn’t need its brick and mortar stores for that – that’s just an albatross around its neck that it can never admit to. 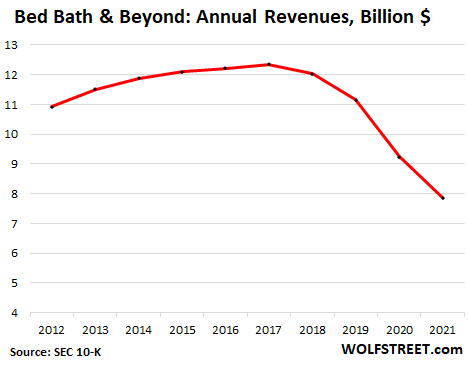 The last time BBBY made an annual profit was in its fiscal year 2017. In each of the following four years, it lost money, totaling $1.5 billion.

Over the past 12 months, the company burned up $1 billion in cash. At the end of the quarter, cash was down to just $107 million.

And the CEO, Mark Tritton, in the job since 2019, and who’d played along with the meme stock crowd hoping for salvation, was fired by the board, all in one day.

The company has made a number of decisions over the years that back-fired, including – like many brick-and-mortar retailers – not shifting its undivided attention to the new thing, ecommerce, to fight off ecommerce competitors that then ate its lunch.

It screwed up the shift to store brands from well-known brands; it had become too dependent on the discount mailers; and the shift to private-label merchandise, which comes with longer lead times, exposed it even more to the supply chain chaos, etc. etc. The BBBY’s board is now weighing to sell its subsidiary BuyBuy Baby to raise cash. This is getting pretty desperate.

And making the situation even worse is an activist investor with a billionaire title, Ryan Cohen, founder of pet retailer Chewy, whose stock has imploded by 71% since the high in February 2021.

The shares, after a long climb, hit their all-time high in December 2013 of over $80. And then the brick-and-mortar meltdown set in, and now the shares are back where they had first been in in 1996.

Because this trajectory since 2017 was so obvious, it began attracting large amounts of short-interest – I mean, this was like the biggest no-brainer in the history of mankind – which by March 2020 attracted the meme traders, which were going after stocks with the most short interest, and so they first blew up the short sellers, and then each other.

For your amusement, here is the long-term trajectory. 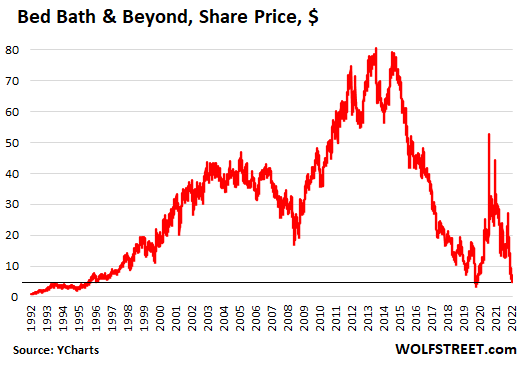 192 comments for “Another Pump-and-Dump Meme Stock Ends in Dumpster of Reality: Bed Bath & Beyond Goes Back to Heck”