Cloud data platform Snowflake – the Buffett darling, but don’t cry for Buffett, he made plenty of money somewhere else – did another job on its stock this evening when it reported Q1 earnings, in what has become a quarterly ritual.

In afterhours trading, its already eviscerated shares dropped 13.8% to $114.41, below the IPO price of $120 a share. After it’s Q4 report three months ago, its shares kathoomphed 25% afterhours. Shares are now down 73% from the high in intraday December 2020, which shows how crazy this whole thing was back then (data via YCharts): 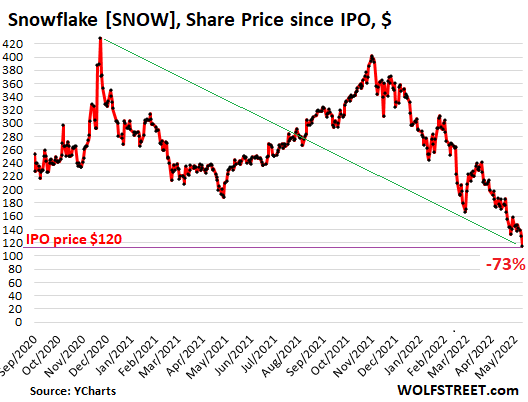 As part of the pre-IPO wheeling and dealing of the Wall Street hype-and-hoopla machine, Buffett’s Berkshire Hathaway bought 2.1 million shares in a private placement and 4.04 million shares from former Snowflake CEO Robert Muglia in a secondary transaction, at the IPO price of $120 a share.

Given Buffett’s aversion to IPOs and tech companies in general, “it’s widely speculated that Buffett lieutenants Todd Combs and Ted Weschler orchestrated the Snowflake bet,” CNBC reported at the time.

At the high of $429 a share on December 8, 2020, Buffett’s stake was worth $2.6 billion, and he was ogling a miraculous paper profit of $1.9 billion. If Berkshire Hathaway still holds those shares tonight, all that profit has vanished into the ether whence it came, and instead, its stake is now in the hole by $37 million.

What Snowflake reported today was that it had a net loss of $165 million on revenues of $422 million. Losing so much money on this amount of revenues takes some talent. But revenues grew 84%, and that’s good. The net loss declined by 18%, and that’s good. It largely kept its guidance in line with its previous guidance, and that’s good because otherwise, there might have been another Snap tonight, which plunged 30% on Monday after hours after spooking everyone with its “The macroeconomic environment has deteriorated further and faster than anticipated.”

But even after Snowflake’s 73% shookalacking since December 2020, they still trade at a price-to-sales ratio of 24, assuming the Q1 rate of sales for a whole year.

Data providers this evening still show a price-to-sales ratio of 68, based on 12-months trailing sales through Q4.

The price-to-sales ratio was in the multiple 100s in late 2020. So it has come a long way, and it still has some way to go, and eventually, sooner rather than later, the company will have to figure out how to produce net income. Reality can be a bitch.

Buffett’s only IPO darling is one of the countless members of my Imploded Stocks. Not yet a member, but working on filling out the application paperwork, is another big investor in Snowflake: cloud-software provider Salesforce, which owns 6.1% of Snowflake, and this widely touted “backing” helped fuel the hype and hoopla in the runup to the IPO. 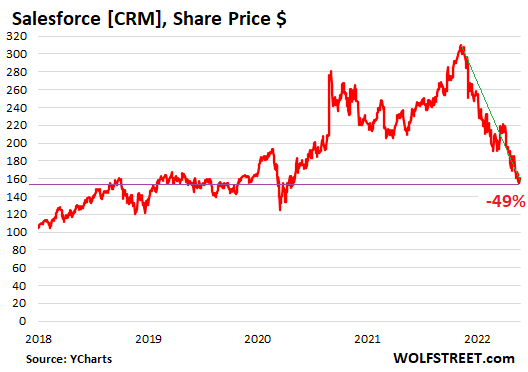 94 comments for “If Buffett Still Owns Snowflake Tonight, His Gain of $1.9 Billion at the High is Now a Loss of $37 Million”