In October, Upstart was worth $35 billion, according to the collective idiocy of the hype-and-hoopla stock market. Now down to $3.6 billion.

In normal times, you’d think that the 45% afterhours-plunge in the share price of a stock would look like a massive cliff dive in a chart. But these are not normal times, and the 45% dive that Upstart Holdings performed tonight after reporting earnings looks like a small-ish step down from, well, the stratosphere. 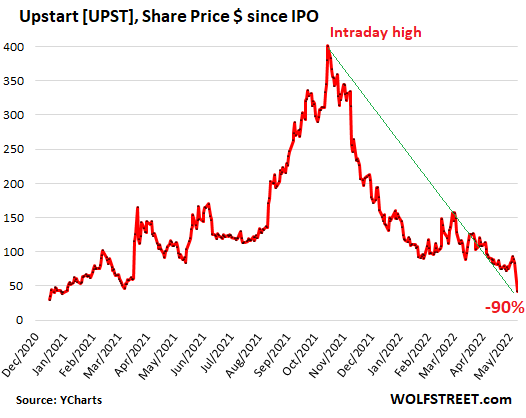 The company sells cloud-based software that uses “artificial intelligence” to make consumer lending decisions. It sells this service to lenders and has attracted some smaller lenders, but not any of the big banks, which use their own systems.

Tonight, it reported that it actually made a little money, 34 cents a share, on 156% growth in revenues of $310 million. So that’s good.

But it cut its outlook for Q2 and the whole year, across the board. For Q2 is expects a month-over-month decline in revenues and net income ranging from breakeven to a loss. For the whole year, it cut its revenue forecast by 10% from its prior forecast, to $1.25 billion.

“This year is shaping up to be a challenging one for the economy,” it said in the earnings report. In the earnings call, it threw some cold water on the entire lending environment, as interest rates have started to spike.

Given the surge in interest rates, “on the margin, a whole bunch of people that would have been approved are no longer approved,” CEO Dave Girouard told analysts during the call.

“So there’s a whole bunch of loans that just never happened at all, and there’s a bunch of people that are still approved, but the interest rate is a few percentage points higher, and a certain fraction of them are going to decide that’s not the product that they want,” he said.

And delinquencies have begun to rise from the “unnaturally low” levels as the stimulus payments have faded, said CFO Sanjay Datta.

“Given the general macro uncertainties and the emerging prospects of a recession later this year, we have deemed it prudent to reflect a higher degree of conservatism in our forward expectations,” Datta said.

OK, fine. It’s getting a little tougher out there for consumer lenders. At least this member of my ever growing list of Imploded Stocks is a company that made a little money in Q1, though it may not make much or any money in Q2. But what is a company like this worth?

At the peak last October, the company was worth $35 billion, according to the collective idiocy of the stock market, 25 times the company’s expected revenues of $1.25 billion this year. It’s now worth $3.6 billion. The remaining $31 billion just vanished back into the ether from where they’d come during the hype-and-hoopla phase.