Carvana, which sells used cars online, is rated deep-junk, and has been losing a ton of money every year, even in the hottest used-car market ever, and whose shares collapsed by 79% from the peak in August last year, now needs to extract more cash from investors to fuel its cash-burn machine and to pay for the $2.2 billion acquisition of Adesa.

Adesa runs wholesale auto auctions and provides related services through brick-and-mortar venues around the US and Canada. Its customers include the biggest used-car dealers that buy and sell at these auctions, and automakers that sell their rental program cars at these auctions.

The fact that a large used-car dealer buys an auto auction house that caters to other used-car dealers and automakers is a problem. Those other used-car dealers compete with Carvana, and they can buy their cars at other auctions. And the automakers can sell their program cars at other auctions. And now there are already rumors that they’re thinking about severing their relationship with Adesa following the purchase by Carvana. This would be a new nightmare for Carvana, after spending $2.2 billion on that deal.

So Carvana needs $2.2 billion to fund the Adesa purchase, and it needs tons of money to fund its cash-burn machine. And now we know how and how much it’s going to raise.

Carvana [CVNA] is offering new securities last week and this week, that total $4.5 billion, with something for everyone:

A preferred stock offering of $1 billion, in a private placement to qualified institutional buyers. This was announced on April 20.

A common stock offering of $1.25 billion, first announced last week. Today, it disclosed that it priced the 15.625 million shares at $80, for proceeds of $1.225 billion after underwriter discounts but before expenses. Priced at $80, the offering reflects a 79% collapse from the peak in August last year: 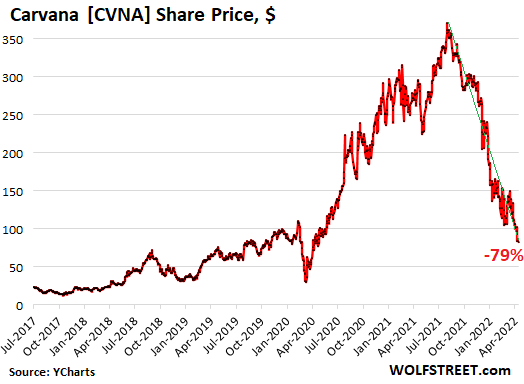 A junk-bond offering of $2.275 billion, whose final details were announced today, of senior unsecured notes maturing in 2030. Moody’s today rated the bonds Caa2, which is deep junk and only two notches above C, which designates default on Moody’s scale (my cheat sheet for corporate credit ratings by ratings agency).

Carvana already had $5.8 billion in debt at the end of last year, composed of $3.6 billion in long-term debt and $2.2 billion in short-term debt. That is a lot of leverage already. Now it is adding to it.

“The downgrade reflects Carvana’s very weak credit metrics, persistent lack of profitability and negative free cash flow generation which we expect to continue as the company embarks on building out, adequately staffing and ramping up acquired sites and existing locations to where they are cash flow positive on a sustained basis.

“The downgrade also reflects governance considerations particularly Carvana’s financial policies which support its external floor plan facilities going current despite the expectation for significant negative free cash flow as well as its decision to finance the ADESA acquisition partially with debt despite its very high leverage.

“Carvana is acquiring the assets of ADESA Inc which includes 56 properties on which it will build its own Inspection and Refurbishment Centers (IRC) as well as leverage its existing sites and logistics.

“The stable outlook recognizes Carvana’s lack of near dated debt maturities and its historic ability to access the public debt and equity markets to support its cash deficits.”

What Moody’s is saying is that despite large leverage, persistent losses, and persistent negative cashflows, Carvana has been able to bamboozle public markets into forking over more money to keep it afloat, and that ability to extract money from new investors to pay off existing investors is why the outlook is “stable” after today’s downgrade.

For Carvana’s shareholders, tighter financial conditions – which is what the Fed attempts to accomplish by rate hikes and QT – pose a massive risk.

Tighter financial conditions will make investors more prudent and careful, and in the future will make funding more difficult and expensive to get for Carvana. But it will need new funding to service existing investors and fuel its cash-burn machine.

Carvana had $5.8 billion in debts, and after the junk-bond offering will have more debt, and those debt holders have rights, and if they don’t get paid, it could trigger a debt restructuring that leaves stockholders out in the cold.

88 comments for “Deep-Junk-Rated Carvana Gets $4.5 Billion from New Investors, after Shares Collapsed by 79%, Hoping the World Hasn’t Run out of Greater Fools Yet”