Great news, but not for the stock. Share buybacks gutted Starbucks. The SEC should again rule them illegal market manipulation, as it had until 1982.

On his first day as the new old interim CEO of Starbucks, which has been in the news for a series of successful union votes by frustrated employees, Howard Schultz told employees in a letter this morning that the company would end its share buyback program. “This decision will allow us to invest more profit into our people and our stores – the only way to create long-term value for our stakeholders,” he wrote on his first day back in the job.

This follows a huge share buyback binge initiated in October by the now departed CEO Kevin Johnson, who’d had this job since 2017. In October, the company announced that it would pay $20 billion in share buybacks and dividends. 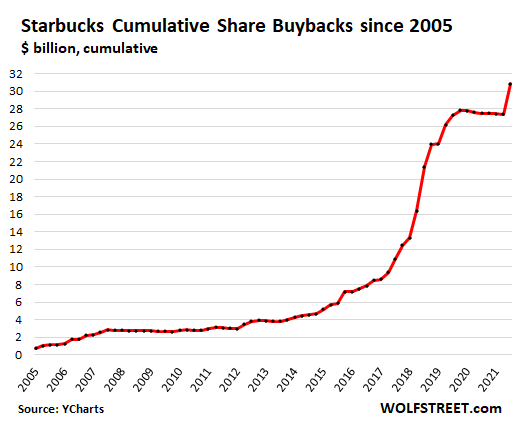 With the buybacks, the company also hid the dilutive effects of shares issued to executives and others as part of the company’s stock-based compensation plans.

Distributing a portion of its profits to its shareholders in form of dividends is what a company is supposed to do. In Q4, Starbucks paid $576 million in dividends, and that was rich, given that it only had net income of $816 million. But ok.

Over the years, these share buybacks, funded at least partially with borrowed money, left the company with more liabilities than assets: In Q4, the company’s negative shareholder equity worsened to $8.5 billion (“shareholders’ deficit,” as the company calls it). Share buybacks have gutted the company financially.

Share buybacks were considered illegal market manipulation until 1982, when the SEC issued Rule 10b-18 which provided corporations a “safe harbor” to buy back their own shares. And since then, companies have blown, wasted, and incinerated huge and ballooning amounts of cash – often borrowed cash – with the sole purpose of manipulating up the price of their shares.

Think of all the things Starbucks could have done since 2017 with the $22 billion in cash it blew, wasted, and incinerated on share buybacks. Two of the things it could have done were pointed out by the new old CEO Schultz today: take better care of its employees and stores.

“We all have a stake in our future,” Schultz wrote in the letter. “This serves as an invitation to come build it.”

Starbucks is facing a host of major issues. There is widespread employee discontent that has led to successful union votes at nine of its stores. Another 180 company-owned stores have filed petitions for union elections. This comes amid the general labor shortages that have made workers aware of their newly gained powers, and they want better compensation packages and working conditions. The company also faces large increases in costs of the products and services it buys. Dealing with these pressures is going to cost some real money.

And it would be a good thing for the SEC to once again rule that share buybacks are illegal market manipulation.

But ending share buybacks may not be a good thing for the share price. Starbucks [SBUX] is down 4.7% at the moment, and down 31% from the high in July last year.

106 comments for “After Having Blown $31 Billion on Share Buybacks to Prop Up its Shares, Starbucks Ends Them, to Invest in “Our People and Our Stores.” The New Old CEO Gets It. Shares Tank”