Unfinished supply is amassing in the pipeline.

Amid shortages of materials, supplies, and labor that caused construction projects to get bogged down, and struggling with a historic spike in costs, homebuilders have amassed 406,000 single-family houses for sale (seasonally adjusted) at all stages of construction, according to date from the Census Bureau today. This is the biggest unsold inventory since August 2008, up by 69% from a year ago, representing 6.1 months of supply: 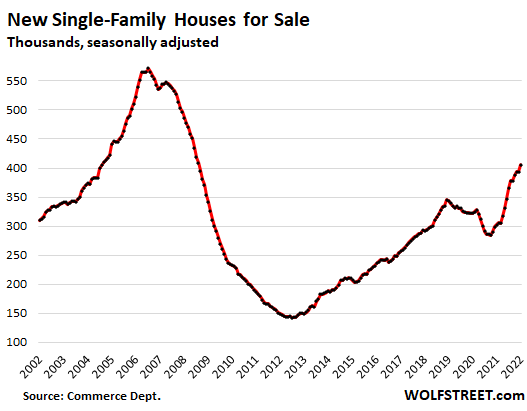 Massive supply in the pipeline, by stage of construction.

Under construction: The number of houses for sale in January that were still under construction was essentially unchanged from December, at 263,000, and both were the highest since August 2007. About 46% of the houses sold in January were in this category; more on that in a moment. 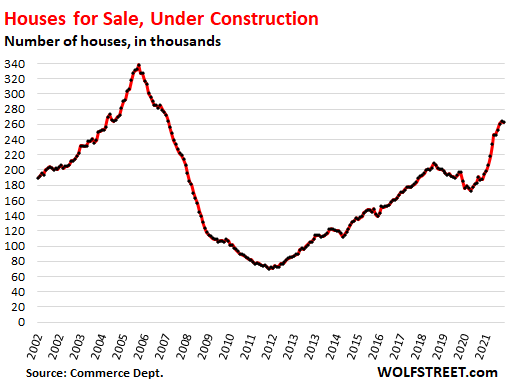 Construction not started: The number of houses for sale where construction hasn’t started yet jumped to 106,000 in January, the highest in the data going back to 1963, as homebuilders – seeing a red-hot market – are piling on new development projects. Nearly 30% of the houses sold in January were in this category. 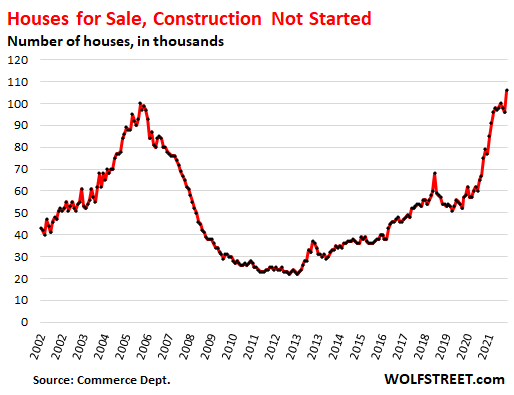 Completed houses: The number of completed houses for sale ticked up to 37,000 houses, still bouncing along the lowest levels in the data going back to 1963, as homebuilders complain about shortages of all kinds that stall projects and prevent them from completing the houses. When unsold houses are finally completed, they sell quickly. Only about 24% of the homes sold were in this category: 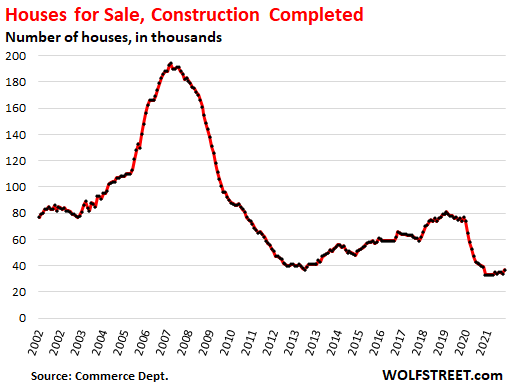 Multi-family buildings and towers experienced a construction boom over the past decade, but they are not included here. 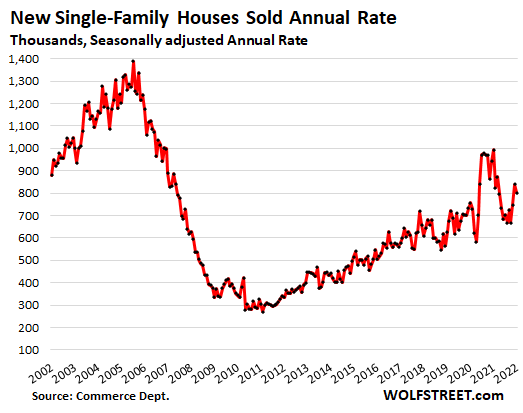 Sales of houses under construction fell to a seasonally adjusted annual rate of 368,000 houses in January, from December’s level, which had been the highest since April 2006 (green line in the chart below). As a percent of total sales, under-construction houses ticked down to 46%.

Sales of houses where construction hasn’t started yet – that the homebuilder will build for the customer – jumped to a seasonally adjusted annual rate of 237,000 houses (purple line). Their share of total sales rose to 30%, about the middle of the range of the past decade.

Sales of completed houses fell to a seasonally adjusted annual rate of 196,000 houses (red line), down 29% from two years ago, as inventories for sale remained near record lows, and there weren’t many completed homes to sell. The share of completed houses as a percent of total sales dropped to 24%.

Note how sales of homes that were still under construction are now dominating (green), as builders are facing eternal lead times to get what they need to finish their houses, ranging from windows and bricks to garage doors to appliances. 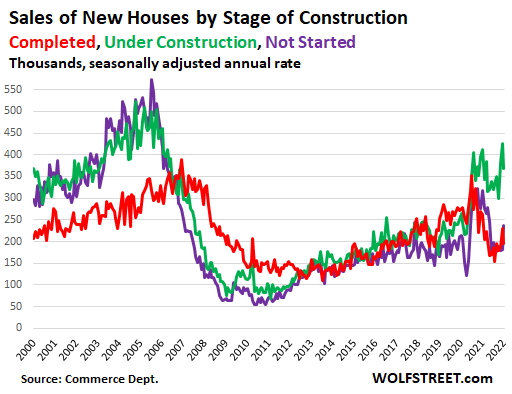 Construction costs of single-family houses – excluding the cost of land and other non-construction costs – spiked by another 1.1% for the month and by 16.8% year-over-year, according to separate data from the Census Bureau today. These year-over-year cost spikes in January and December were the worst in the data going back to 1964. 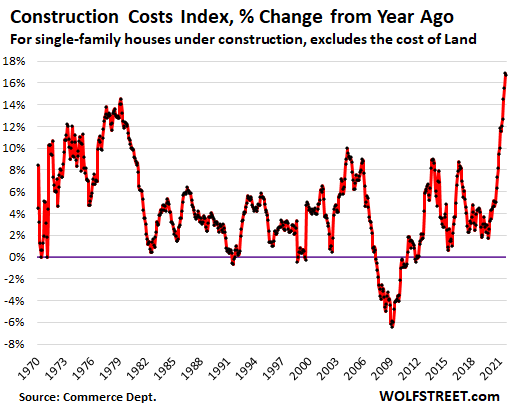 Passing on the mega-spikes in construction costs, plus some…

The median price of single-family houses sold in January undid most of the mix-based drop in December, and at $423,000 was up 13% year-over-year. And as big as that increase seems, it was down from the increases in the 20% to 23% range that prevailed last year through November.

Enabled by the willingness of homebuyers to pay whatever they can afford to pay, homebuilders are able to pass on the spike in construction costs, plus some, to book massive profits: The largest homebuilder, D.R. Horton, booked a massive record profit of $4.2 billion in 2021, up 162% from its 2019 net profit. The spike in median prices at elevated sales volumes shows how: 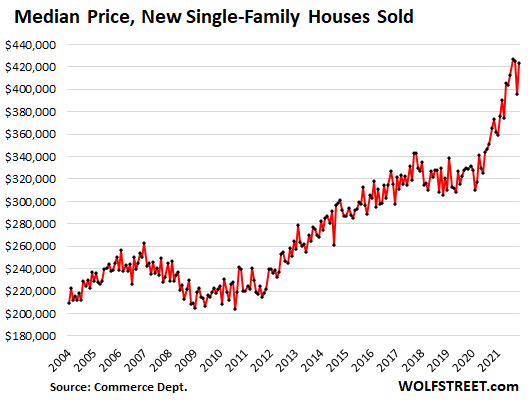