“Perhaps the biggest pandemic trend was this: The rich got richer — and they also bought bigger”: Olshan Realty.

We knew this was coming: The huge bout of global money-printing and interest-rate repression that created historic asset price inflation and made a small portion of rich people immensely richer has had a big impact on luxury real estate in Manhattan. “Luxury” in Manhattan is defined as $4 million or more for a condo, co-op, or townhouse.

And “mostly New York metro area buyers” stepped in, according to Olshan Realty, “riding the wave of lower prices, low interest rates, and surging stock market, and the belief that New York would come back.”

The Pandemic had pulled the rug out from under the luxury market in the spring of 2020 and accelerated the climb-down process from the prior money-printing euphoria in 2013 through 2015. During the climb-down process, the number of signed contracts collapsed by over half, from 1,344 in 2015 to 935 in 2019, and finally to 645 contracts in 2020. But in November 2020, the floodgates opened. 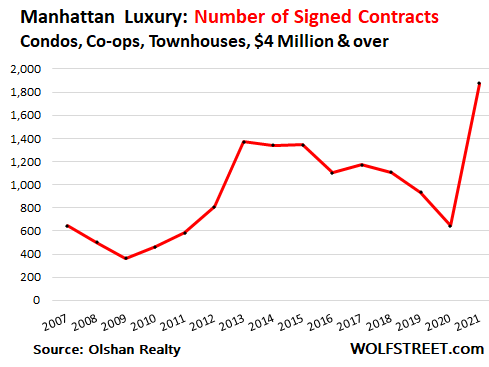 “Perhaps the biggest pandemic trend was this: The rich got richer — and they also bought bigger. Size mattered more than ever as offices and schools shifted to the home. During the pandemic years of 2020-2021, the average size of a luxury condo deal was over 2,900 square feet, 5% larger than the previous 7 years,” Olshan said.

“The demand for size spilled into the townhouse market with 212 signed contracts, far surpassing the record of 153 deals in 2014. And the trophy market, defined as $10 million and above, with most of those properties over 4,300 square feet, clocked in at 400 contracts, blowing away the 2014 record of 270 contracts,” Olshan said.

Trophy properties – those with final asking prices of $10 million or more, appealing to folks that had benefited the most from the money-printing during the pandemic – had a huge year, with 400 signed contracts, leaving in the dust the prior euphoria record in 2014 of 270 contracts: 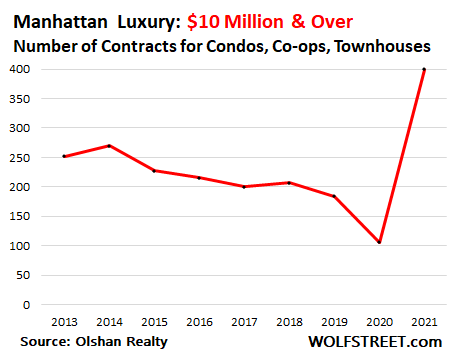 Most of the details at this nosebleed altitude are kept secret by the parties involved, including the actual price paid, and instead of the unavailable sold prices, Olshan tracks the final asking price at contract signing. 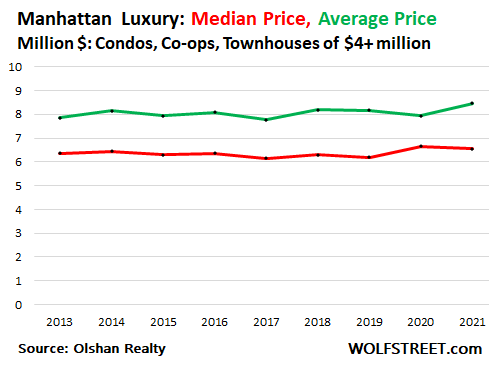 By comparison, overall condo prices of all price categories in the vast New York metro, according to the S&P Case-Shiller Home Price Index, have surged 37% since 2013, with a spike this year, after languishing for three years in a row: 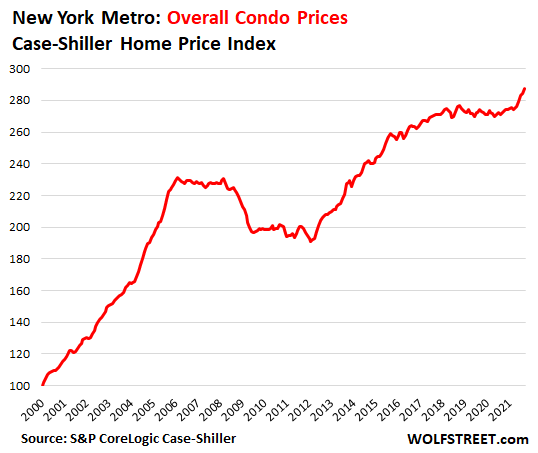 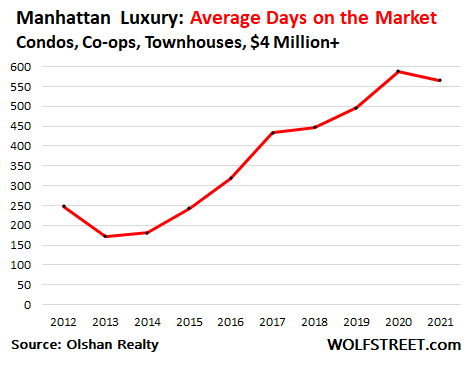 And so draws to a close a year that was marked by the mega-effects of super-charged money-printing, now including the worst inflation in forty years. And it was just what the luxury housing market in Manhattan, that had fallen on hard times, needed the most.

114 comments for “Glorious Effects of Money-Printing Bail Out Manhattan Luxury Housing Market in 2021, after it Fell on Hard Times”