And which states are the leaders in pickup truck sales?

At the end of the third quarter, there were 283.8 million vehicles in operation (VIO) in the US, of all model years, from the oldest still-registered classic to new vehicles that were just sold, up from 281.6 million vehicles a year earlier, according to Experian’s quarterly report, based on registration data. And over the 12-month period, 43.4 million used vehicles changed hands.

The net gain of 2.2 million vehicles in operation over the 12-month period is a result of:

Vehicles in Operation by Automaker:

Of all the 283.8 vehicles still on the road, 21.6% were manufactured by GM, and 16.4% by Ford. Toyota is number three. Where is Tesla? It still has only a minuscule share of 0.3% all VIO and is relegated to be part of “Other manufacturers.” 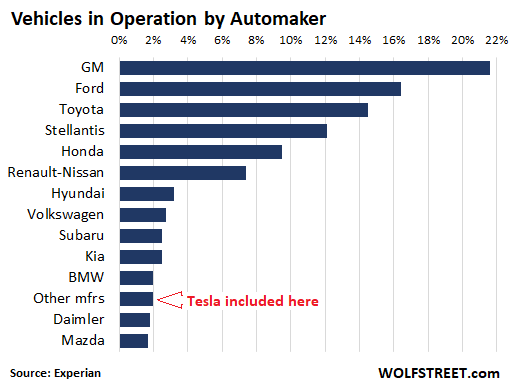 New Vehicle Sales in 2021 by Automaker:

In 2021 through Q3, Toyota became the market leader as its supply chains were less tangled up by the chip shortages than those of other top automakers, pushing GM and Ford into second and third place.

Tesla, with a share of 1.9% of new registrations in 2021, ranked just behind Daimler and ahead of “Others,” near the bottom. 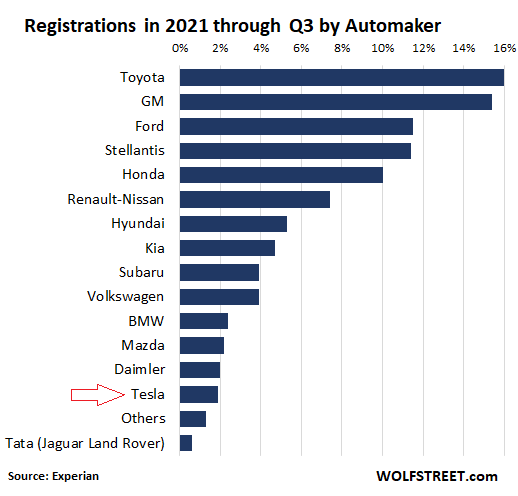 Segments of Vehicles in Operation.

Not shown here are EVs because in terms of VIO, their numbers are too small: There were 1.3 million EVs in operation at the end of Q3, accounting for 0.46% of all vehicles in operation. 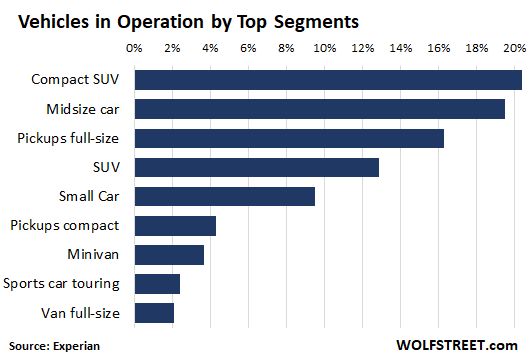 These are the top six states in terms of the most new pickups sold in 2021 through Q3, with their share of total pickup registrations in the US:

In 2021 through Q3, of all the EVs sold, over one-third were sold in California (which has 12% of the US population), making it by far the hottest EV state. Top five states in terms of the share of EV registrations in 2021.

Tesla still totally dominates the still minuscule EV market, and its sales grew in 2021, but competition from the legacy automakers is encroaching on it at a snail’s pace, and its total share of EV sales fell to 68.2% in 2021, from 79.4% in 2020. But at this pace, it’ll be a while before the legacy automakers transcend their own hype and actually start making and selling enough EVs to pull up next to Tesla:

121 comments for “Vehicles in Operation and Registrations in 2021 by Automaker and Segment. Where’s Tesla?”