In the US, raging inflation is not far behind. But the Fed is still recklessly pouring fuel on it.

The Central Bank of Brazil has embarked on a series of shock-and-awe rate hikes in order to not fall further behind. The Bank of Mexico has largely mirrored the Fed’s rhetoric, expecting this raging inflation to go away on its own somehow, but it has started to rase rates in June, very gingerly. And the Fed has made a verbal U-Turn, but is still running the money-printer nearly full blast and is still repressing its policy rates to near 0%.

Consumer price inflation in Mexico spiked in November even more than the already high expectations, to 7.4%, from 6.2% in October, the red-hottest inflation since January 2001, according to Mexico’s INEGI today. The Bank of Mexico’s target range is 3.0%. Inflation is now surging broadly across the economy, with the core inflation (without food and energy) hitting a 20-year high of 5.7%: 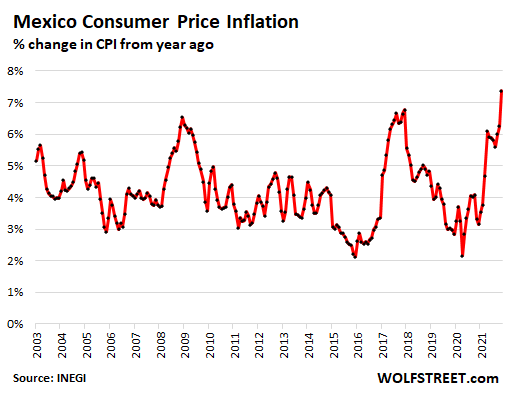 The Bank of Mexico has raised its policy rate by 1 percentage point since June, in four increments of 25-basis points each, from 4.0% to 5.0%. At its meeting next week, it will likely raise its rate another 25 basis points to 5.25%, thereby falling further behind raging inflation.

Following its last meeting, Banxico said again that it expected inflation to be transitory, carefully echoing the Fed’s Powell. This was shortly before Powell “retired” the term, however. But due to magnitude of the price shocks, and their spread across the economy, Banxico said it deemed it necessary to raise its policy rate.

Short-term rates that are kept below the rate of inflation – so negative “real” interest rates – are considered very stimulative and inflationary. And it takes monetary policies about a year or two to have the first impact on inflation. You cannot just turn the dial on inflation. This is going to be a long battle.

Bank of Brazil faces an even bigger inflation fiasco.

Consumer price inflation in Brazil in October jumped to 10.7%, approximately matching January 2016, which had been the highest since 2003. November’s reading will be released on Friday, and it’s likely very ugly, in light of what Mexico experienced.

This inflation started to take off in late 2020 and hasn’t looked back since. Blamed for the November jump were the usual suspects, fiscal stimulus, supply chain woes, a weaker currency, and severe droughts. 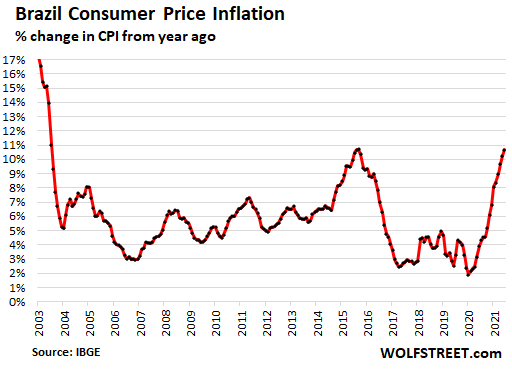 Once inflation takes off like this and gets entrenched in the economy, after all this massive stimulation, including interest rate repression, then it takes a long time – measured in years – and often a lot of hardship to get inflation back under control.

So the Bank of Brazil, in an effort to not fall even further behind, nailed another shock-and-awe rate hike yesterday of 1.5 percentage points, though it wasn’t a shock since the central bank has been telegraphing these monster hikes.

The central bank “foresees” another rate hike of this 1.5-percentage-point magnitude at the next meeting, which would bring the Selic rate to 10.75%. And it expects the Selic rate to rise to 11.75% during 2022, as it is trying to get its policy rates to catch up with this raging inflation.

“Price increases were higher than expected, both in the more volatile components and on the items associated with core inflation,” it said in the statement.

But even the Fed has made a U-Turn, and markets might not fully appreciate yet what this multi-decade high, global inflation that continues to heat up will do to central bank policies as they belatedly are trying to get it under control, and how long it will take to do so.