Nikkei 225 is flat with February, when the BoJ started unloading government securities.

The Bank of Japan’s monstrous QE that had become part of the national economic religion of Abenomics under Prime Minister Shinzo Abe in early 2013 ended without fanfare. Following Abe’s announcement of his retirement in August 2020, Abenomics went out the door, and the BoJ began tapering its massive asset purchases in the fall of 2020.

And on its balance sheet as of October 31, released today, total assets, at ¥725 trillion ($6.36 trillion) were down a smidgen from the level at the end of August (¥727 trillion) and have essentially been flat since May except for minor fluctuations: 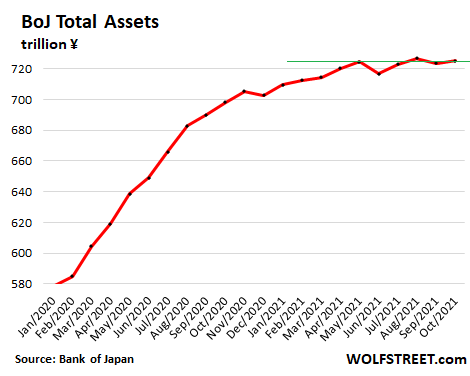 This was initially hard to see due to the fluctuations of these holdings as large long-term bond issues matured in one month and were redeemed by the government, and then in one of the following months were replaced by new securities. 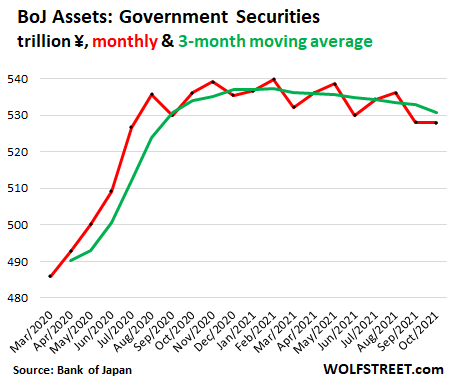 Stock ETFs, Japanese REITs, corporate paper, and corporate bonds were the most drooled-over part of the BoJ’s QE activities. The idea back in 2013 was that a central bank with unlimited buying power would buy lots of equities and drive up the beaten-down stock prices in Japan.

But the BoJ never bought much, and the total of all these categories combined, after all these years, amounts to ¥48.8 trillion, or only 6.7% of total assets. Of this, ¥36 trillion are stock ETFs, amounting to less than 5% of the BoJ’s total assets.

The BoJ stopped adding to them in February 2021, and the combined group has been roughly flat since then (red line in the chart below). The BoJ carries equities at market value, and the Nikkei 225 Index at 29,520 currently, is essentially flat with mid-February.

I also included the BoJ’s holdings of Government securities (purple line) for a sense of how small these purchases of equities and corporate credits have been, despite all the hype about them: 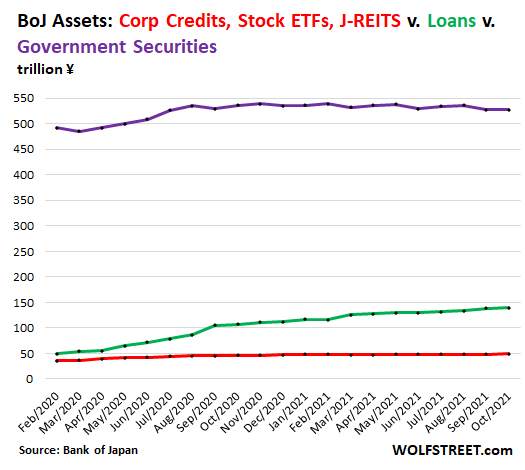 The long-term chart shows just monstrous the money-printing was under Abenomics: 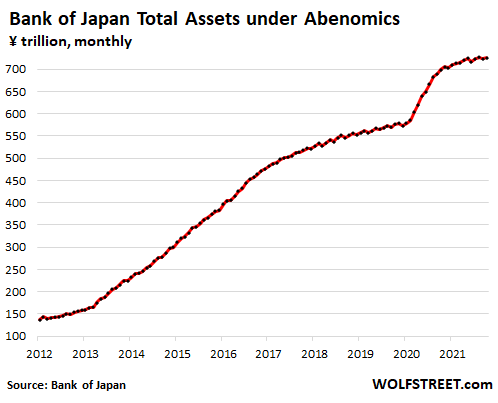 In terms of the total amount of assets it purchased, in dollar terms, the Bank of Japan is in third place among the top three QE monsters, behind the ECB and the Fed. But the BoJ started 21 years ago, while the Fed and the ECB started 13 years ago. Now, combined, the three QE monsters hold nearly $25 trillion in assets:

But $25 trillion of money-printing by three central banks was bound to eventually trigger something, and possibly something Big, just when everyone had fallen asleep about the risks of money printing.

And we might be looking at that event now, on a global scale, with inflation raging in the US and Europe, and, mirabile dictu, even starting to take off in Japan, from -1.1% in April on a near-straight trend up to +0.2% in September.

Even as radical and monstrous stimulus continues globally with repressed interest rates and enormous balance sheets at central banks, there are now a lot of concerns that the inflation dynamics have woken up and will be tough and painful to tame if allowed to run.