Caught up in the brick-and-mortar meltdown, it faces its own botched decisions of prior years and a market that has horribly turned against its pharmacies.

Walgreens has been making global headlines with its announcements that it would close some of its huge number of stores in San Francisco. Even after these closures, there are now 53 stores left, some of them only a few blocks from each other.

But no one paid attention to its SEC filings where it reported that it had already closed 595 stores in the US over the past two fiscal years through August 31, including some of the 200 Walgreens-branded stores that it said in 2019 it would close. This company is a store-closing machine.

There are broad reasons for that, including the brick-and-mortar meltdown and Walgreens declining revenues.

But in San Francisco, there is a pile of huge reasons, including: The brick-and-mortar melt-down that is particularly harsh because people are ecommerce fanatics here; working from home that messed up Walgreens’ most concentrated area, the Financial District; and the unique market for pharmacies in San Francisco that Walgreens tried to monopolize and got caught with its pants down.

And Walgreens’ stated reason for the store closures?

Oh no, not cost-cutting in the middle of the brick-and-mortar meltdown, like other chains – those that already went bankrupt and those that haven’t gone bankrupt yet. And oh no, not in recognition that its efforts to monopolize the pharmacy business in the City totally backfired because of unique reasons we’ll get into in a moment. And oh no, not because those store closures were planned as part of those 800+ store closures it announced in 2018 and 2019 nationwide, to be undertaken over the next few years, including over 600 Rite Aid stores and 200 Walgreen stores. Oh no, none of that.

It said that the reason was shoplifting.

In its annual report (10-K filing with the SEC) for fiscal year through August 31, Walgreens disclosed that “store damage and inventory losses due to looting” in the US, net of insurance recoveries, for the past three years combined amounted to $68 million, with an M.

But organized shoplifting is real across the US, thanks to ecommerce platforms.

All brick-and-mortar retailers suffer from inventory losses due to theft. The industry word is “inventory shrinkage,” or lovingly, “the shrink” or “shrink expense.”

Many retailers mention the “shrink” in their financial disclosures, even if they don’t spell out the dollars. For example, supermarket mega-chain Albertsons Companies (includes Safeway and other store brands) said in its Q3 filing that its gross profit ticked up because of a variety of factors, including “improvements in its shrink expense.”

Organized shoplifting for commercial purposes is real. It is fed by the easy profitability with which the stolen goods can be sold on Amazon and other platforms to law-abiding Americans. When you buy a brand-name shampoo on Amazon from a third-party vendor, you have no idea where the shampoo came from. Brick-and-mortar retail stores have become the cost-free suppliers to those online sellers.

Walgreens has a revenue & income problem and is cutting costs and closing stores.

But since then revenues fell. In fiscal 2021, ended August 31, Walgreens had revenues of $132 billion, down 4% from 2019, despite price increases and additional acquisitions, including through its “Pharmacy Acquisitions,” with which it buys independent pharmacies to get rid of pesky competition. “Our acquisition process is designed to get an offer into your hands faster than anyone else,” it says on the program’s website. Well-oiled market concentration machine.

Given this revenue problem, cost cutting is the strategy – and that includes store closings.

In San Francisco, a commercial lease can be negotiated for any term, but the typical retail store lease is for 10 years. Walgreens isn’t going to break the lease. It’s going to close the store when the lease comes up for renewal. And it knows years in advance when that is, and it makes lease-renewal decisions well in advance of closing the store. This is routine corporate planning to cut costs.

Net income over the past three years has plunged – hence the cost-cutting efforts:

Walgreens tried to monopolize the San Francisco market and it backfired.

Despite the store closures in San Francisco, Walgreens still has 53 stores left, according to the San Francisco Chronicle. San Francisco is about 7 miles by 7 miles. You can walk across it in less than two hours. In and around the Financial District, there is a Walgreens every few blocks.

In my neighborhood, Walgreens closed the store in the NorthPoint Centre that was two blocks from its store in the old Tower Records Annex on Columbus Avenue. And the Columbus store is partially geared to serving tourists that wander by (sandwiches, bottled drinks, chips, emergency tourist supplies, etc., along with neighborhood functions, such as emergency toys or chocolates for the nearly forgotten wedding anniversary, to serving as a FedEx drop-off and pick-up point.

The pharmacy, which is mostly empty when I walk in, provides some healthcare services, such as flu shots. We’ll get into the special plight of those pharmacies in San Francisco in a moment.

There are also 22 CVS stores in the City. This map from the San Francisco Chronicle shows the Walgreen stores (blue) and CVS stores (red). 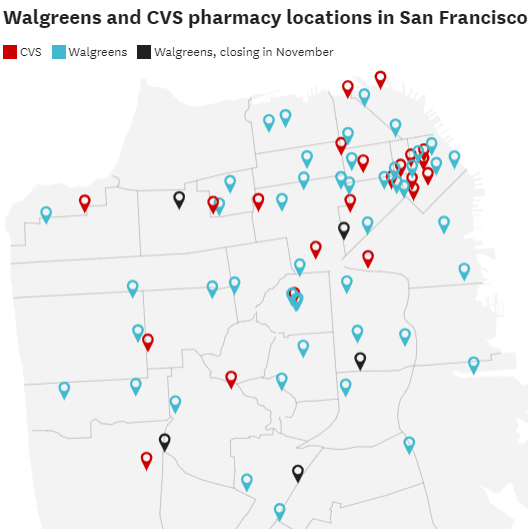 Walgreens stores around the Financial District crushed by working from home.

In the store map above, note the cluster of stores around the Financial District. This is nuts in normal times. Who made the decision to plaster the area with stores like this? Trying to monopolize the area? Store rents are high. And then came working from home.

San Francisco has massively moved to working from home. Office attendance is still down by 75% from pre-Covid times, according to Kastle Systems. The Financial District is still nearly dead. Countless retail stores, cafés, delis, and restaurants that had served those office workers are now empty store fronts. There is a lot of discussion about what to do with all the vacant office space, with a monstrous 26% of the office space on the market and available for lease.

It will take years to sort this out. And many of the customers that used to buy at those Walgreens aren’t coming back.

I suspect that Walgreens will close many of those stores around the Financial District when their leases come up for renewal, and each time, it will say that it’s because of shoplifting, instead of the real reasons: Its own catastrophic decision making in prior years, the brick-and-mortar meltdown, working from home, and the peculiarities of the prescription drug market in San Francisco.

Over the years, Walgreens tried to monopolize the lucrative pharmacy business in the City, pushing out independent pharmacies and putting stores in every corner.

Then years ago, came the brick-and-mortar meltdown, where prescription drug purchases walked off to the internet. Many healthcare providers have their own online pharmacies, or partner with online pharmacies, that deliver from locations in the City. Amazon is now also muscling into this space.

The Biggie is Kaiser Permanente.

Kaiser uses its own brick-and-mortar pharmacies at its campuses and hospitals and has an efficient online and phone pharmacy service. If the Bay Area market share holds for San Francisco, about half of insured San Franciscans are covered by Kaiser and most likely use Kaiser’s pharmacies. With some Kaiser plans, prescriptions can only be filled in a Kaiser pharmacy.

There has been some polite pushback against this assertion that shoplifting caused Walgreens to close some stores in San Francisco. Mayor London Breed has weighed in. The San Francisco Chronicle has run a series on it. Others too have poked holes into the assertion. I weighed in a few times in the WOLF STREET comments (including here).

Walgreens can say whatever nonsense it wants to say. It’s not illegal to spout off propaganda to cover up idiotic operational decisions, such as over-storing San Francisco to monopolize the market, and to divert attention from catastrophic long-term changes in the market, such as the brick-and-mortar meltdown due to the shift to ecommerce or the dominance of Kaiser.

The problem here is that the media is picking up this corporate clickbait, and in its braindead manner, is making this clickbait go viral to get clicks. People will only read the headlines and share those links – without knowing what’s going on and not wanting to know what’s going on – in order to be amused by whatever the crazies in San Francisco are doing again.

234 comments for “Why Walgreens is in Trouble in San Francisco and is Closing Some Stores: It’s Not Shoplifting, that’s an Artful Distraction from the Real Reasons”