The Fed is looking for jobs reports to justify tapering its asset purchases, and this was one. But the labor market is still messed up.

While companies are desperately searching for labor and are offering hiring bonuses and higher wages, amid a record number of unfilled job openings, still 6.1 million fewer people were working in July than before the pandemic, and 13 million people were still claiming state or federal unemployment benefits. But this weird phenomenon is showing signs of loosening up.

Employers of all types – companies, governments, and nonprofits – reported that they added 943,000 workers to their payrolls in July, and 2.5 million over the past three months, bringing their payrolls to 146.8 million workers, according to the Bureau of Labor Statistics today. But total payrolls were still down by 5.7 million from February 2020 (green line).

Households reported that the number of people working, including the self-employed, jumped by 1.04 million in July, and was up by 1.5 million over the past three months, to 152.6 million workers. But this was still down by 6.1 million from February 2020 (red line). 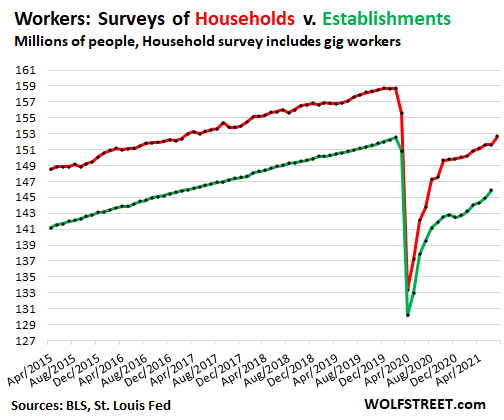 The fact that households reported a gain over the past three months of 1.5 million workers, while establishments reported a gain of 2.5 million workers may indicate that some self-employed people, who are counted in the household surveys but not in the establishment surveys, have switched to regular employment with companies – which would make sense, and has been seen anecdotally, given how aggressively companies are now hiring.

If the Fed is looking for jobs reports that will give it economic cover to begin tapering its asset purchases later this year – as many Fed governors have been saying recently – this was one.

People only slowly trickling back into the labor force.

The labor force – people who had a job during the survey period or who were actively looking for a job in the prior four weeks – inched up by 261,000 people in July, and by 359,000 people over the past three months, to 161.3 million. It remains down by 3.2 million people from December 2019. The labor force has recovered barely over halfway from its plunge in April 2020: 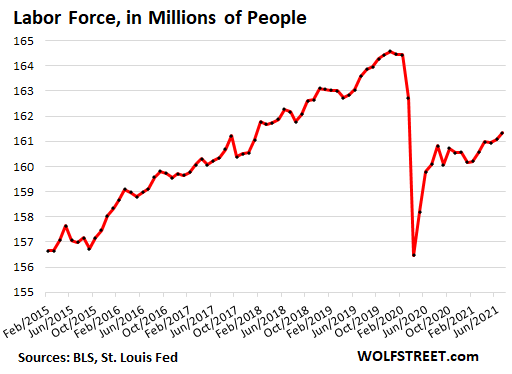 People who might in the future want to work but weren’t actively looking for a job during the weeks prior to the survey – whether they were busy with other projects, or had to take care of their kids or an elderly parent, or whatever – aren’t considered to be in the labor force.

People who “retired” during the pandemic as part of the sudden retirement boom – including those chasing quality of life with their stock market or crypto gains – may not be permanently retired, and may return to the labor force when things change for them, such as a big downturn in the stock market or cryptos, a phenomenon that occurred after the dotcom bust when lots of former stock-market millionaires started looking for jobs again. Once they’re actively looking for a job, or got a job, they’re back in the labor force.

Employment in manufacturing rose by 27,000 workers in July, and by 102,000 over the past three months, to 12.4 million jobs, amid a red-hot boom in manufacturing and endless complaints about difficulties in hiring qualified people. Manufacturing payrolls were still down by 433,000 people, or by 3.4%, compared to February 2020: 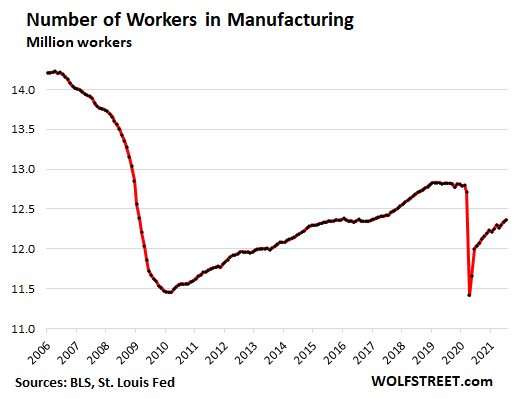 But with automation, manufacturing production, despite 3.4% fewer jobs, has recovered compared to February 2020. This has been the pattern during every downturn: Manufacturers cut costs and raise productivity by investing in automation.

Even as employment in the manufacturing sector went into a multi-decade decline, production continued to rise until the Great Recession, at which point manufacturers massively offshored production. Much of the auto components manufacturing walked off to China at the time, and production, adjusted for inflation, never recovered to the 2007 peak: 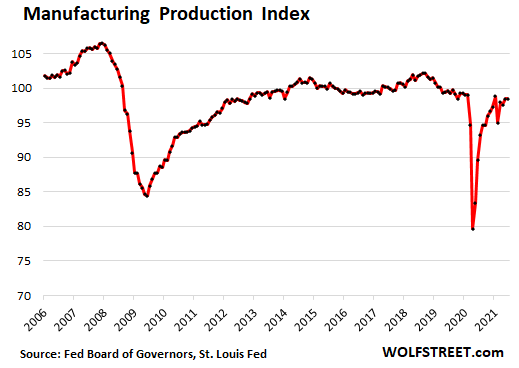 Employment in the leisure and hospitality industry jumped by 380,000 jobs in July and by 1.09 million over the past three months, as restaurants, bars, hotels, and casinos are furiously trying to hire workers. Employment was still down by 1.74 million people from the peak in February 2020, but up massively from the lockdown lows in April last year: 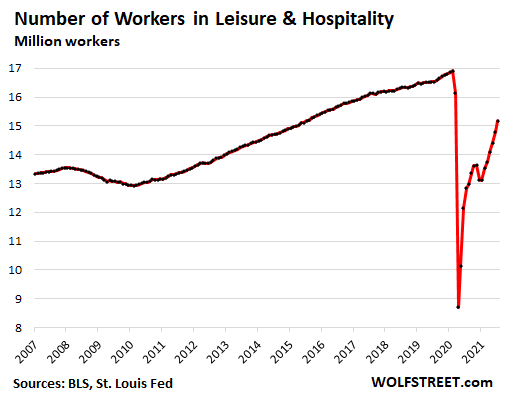 Employment in Construction rose by 11,000 workers in July, after two months of declines, for a net decline over those three months of 18,000 workers, to 7.4 million workers: 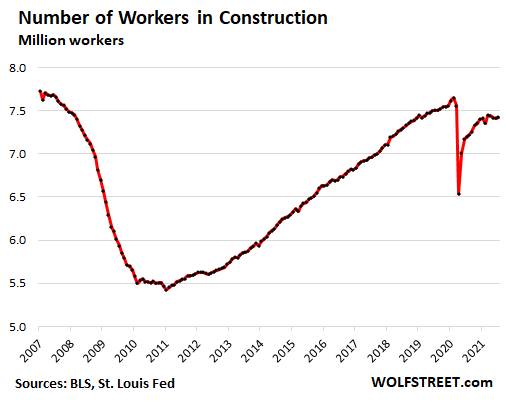 Employment in federal, state, and local governments rose by 240,000 workers in July, and by 468,000 workers over the past three months, after massive job losses during the pandemic.

At the federal level, military personnel and the good folks at the major intelligence agencies are not included. But USPS employees are included. At the state and local levels, it includes workers in education, many of whom are now getting back to work. The number of government workers plunged during the pandemic, in part related to jobs in education. In July, government payrolls were still down by 782,000 workers from February 2020: 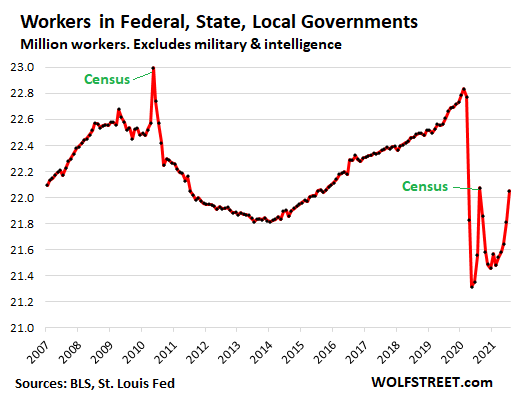 In these states, the unemployed residents, if eligible, still receive the meager state unemployment benefits, but no longer receive the federal top-off benefits. The federal benefits are scheduled to expire for all states on September 6. Every employer is looking forward to this day.

In addition, employers had to compete with this combination of state and federal unemployment benefits that ended up paying a large number of lower-wage people more than they’d made while working, and provided other benefits.

This effectively put a floor under the wage scale in some industries, and employers had to adjust to it by raising wages, improving benefits, offering bonuses, and the like – or make do with fewer employees, or both.

This weird phenomenon of “labor shortages” in an economy that is not at all short on people who could and would possibly work under different conditions is now gradually easing. And in states that withdrew from the unemployment benefits, continued claims for unemployment insurance fell significantly since early July, compared to states that maintained the federal benefits. Read… Yes, More People Went Back to Work in States that Ended the $300/Week in Federal Unemployment Benefits