Mass-forbearance is the best thing that ever happened to sweeping reality under the rug. But now, there’s a huge mess under the rug.

To the Fed’s great relief, hardy American debt slaves are finally going deeper into debt, after having made unnerving efforts in prior quarters at paying down their credit cards, the most expensive debts with the biggest profit margins for banks. What helped push up total borrowing were massive price increases that had to be financed – particularly homes and vehicles – and the loans to finance these purchases jumped even if the volume of purchases didn’t.

Total household debt – mortgages, HELOCs, credit cards, auto loans, student loans, and other debt – jumped by $313 billion in Q2, from Q1, according to the New York Fed’s Household Debt and Credit report today. This 2.1% jump was the biggest quarter-over-quarter jump in years, matching Q4 2013, and both were the biggest jumps since 2007. The total balance of debt reached nearly $15 trillion.

The balance of auto loans and leases jumped by 2.4% in Q2 from Q1, to $1.42 trillion, the biggest quarter-over-quarter percentage increase since 2016, based largely on surging prices of new and used vehicles: 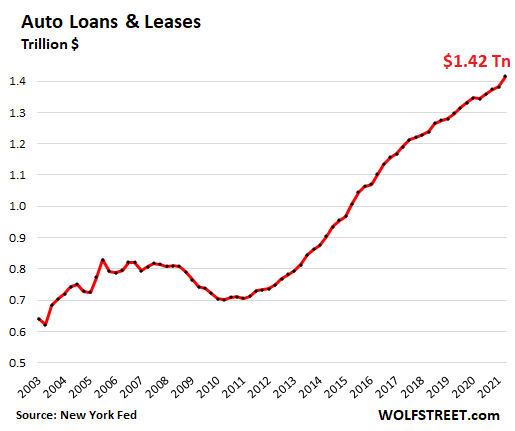 But the stimulus effect kicked in. In late March, the $1,400 stimulus checks started going out, and they continued hitting bank accounts for months, and some people used them to get caught up with their auto loans that they had fallen behind on. And seriously delinquent (90 days plus past due) loan balances, dropped to 4.35% of total balances outstanding. That decline of 44 basis points from the prior quarter was the biggest drop in the data going back to 2003: 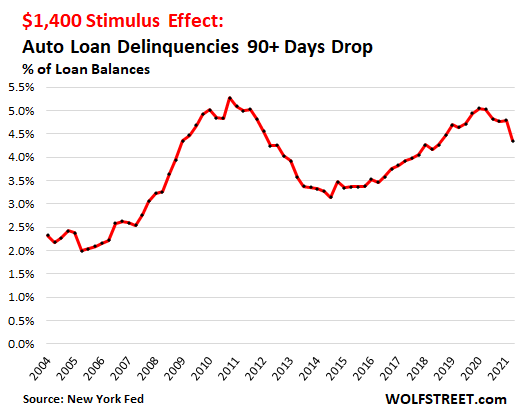 After paying down their credit cards since the peak in Q4 2019, which had confounded the folks at the Fed in the prior quarter, Americans finally saw their error and backtracked and racked up more debt on their cards, in order to pay 15% or 25% or even 30% in interest in a 0% interest-rate environment.

Credit card balances rose 2.2% from Q1, to $787 billion. Let’s hope that this uptick wasn’t “transitory,” or else the Fed is going to have a cow: 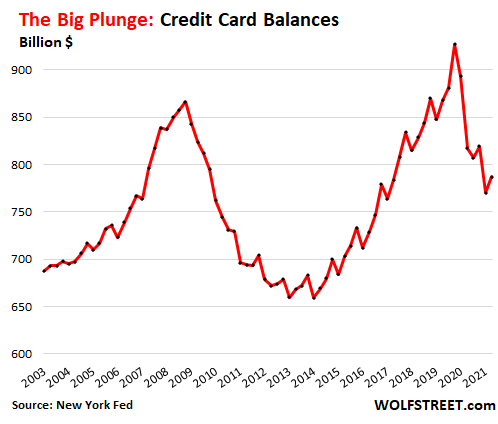 Seriously delinquent credit card balances fell to 9.3% of total balances, thanks to the stimulus checks that went out in March and helped some people get caught up. Despite the stimulus checks, 90-day-plus delinquencies remain higher than in the 2014-2019 range: 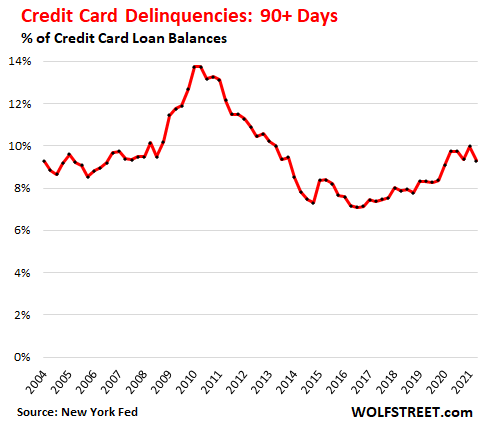 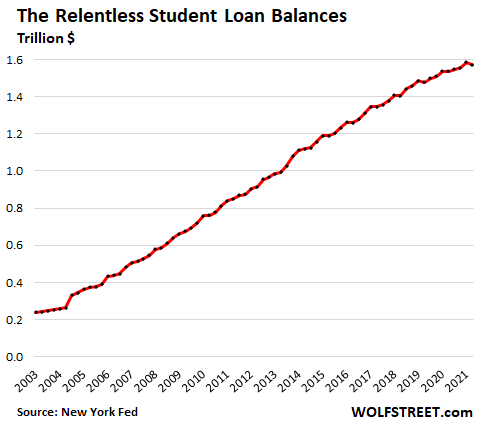 Even though few student loan borrowers are still making payments – eagerly waiting for the big kahuna to set them free – the serious delinquency rate dropped further, the sixth quarterly drop in a row, to 5.7% of total balances, the lowest in the data going back to 2003.

Delinquencies have dropped not because borrowers are suddenly catching up with their student loans in some magnificent manner, or are wasting their stimmies to catch up, but because student loans were automatically entered into forbearance last spring, and loans in forbearance don’t count as delinquent. Problem solved: 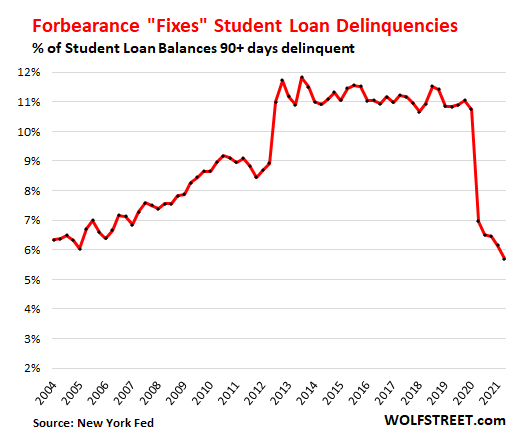 The balances of personal loans and lines of credit from banks, shadow banks, peer-to-peer lenders, and payday lenders, after falling for five quarters in a row, finally rose again, up by 1.9% from the prior quarter, to $421 billion: 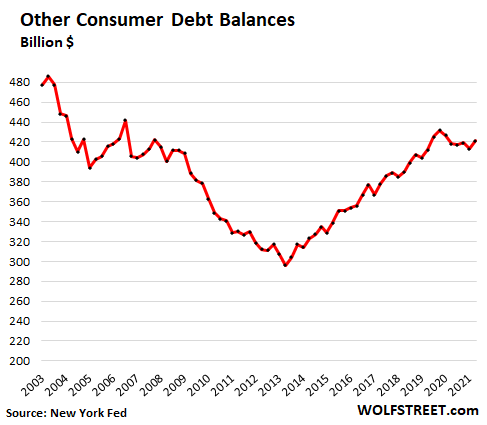 Serious delinquencies remained roughly flat with the prior quarter – thank god for the stimulus checks – at 7.7% of total balances: 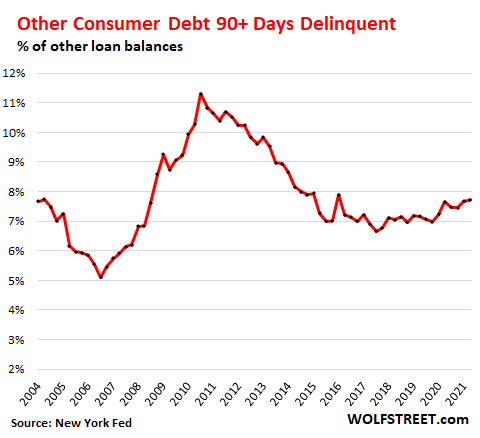 Mortgage debt jumped 2.8% in Q2 from Q1, the biggest quarter-over-quarter jump since Q2 2007, amid the fastest rise in home prices in recorded US history, as it takes more dollars to finance the same home, and as refis are ballooning. 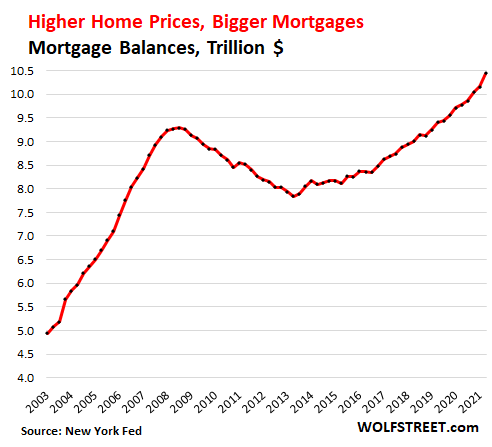 But home equity lines of credit (HELOC) balances continue to decline and are falling out of use, as homeowners have switched to cash-out refis at lower rates if they need extra money to plow into cryptos or stocks or a new deck out the back. The $322 billion in outstanding HELOC balances are down by 55% from the peak in 2009: 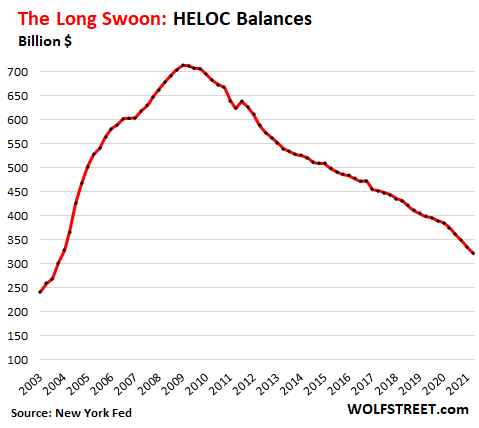 Mass-forbearance is the best thing that ever happened to sweeping delinquencies under the rug. Seriously delinquent mortgage balances dropped to 0.47% of total balances, the lowest in the data going back to 2003: 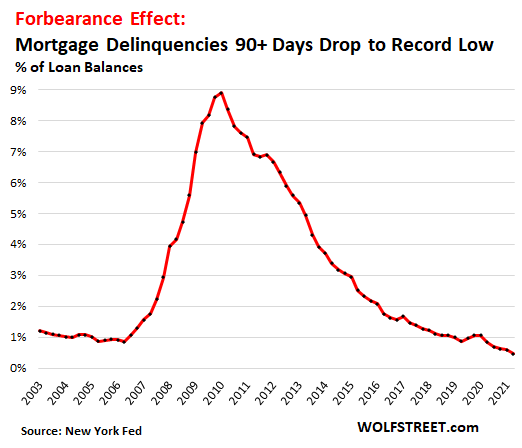 But forbearance for federally-backed mortgages, after having been extended, is running out this fall. At the end of Q2, there were still nearly two million mortgages in forbearance. To exit forbearance, the borrower will sell the home and pay off the mortgage, or the lender will refinance the mortgage often with lower payments and extended terms to make it easier for the borrower to pay for.

This is all part of a gigantic government-backed extend-and-pretend scheme that includes eviction bans for renters – now expired at the federal level but not at state and local levels – and student loan forbearance, still scheduled to expire at the end of September.

This is an economy where credit problems have been swept under the rug, where many consumers stopped making payments without negative consequences, even as free money hailed down upon them.

After 16 months of sweeping this stuff under the rug, there is now a huge mess under the rug, and the temptation in government is to just keep it there and forget about it, or have the taxpayer clean it up, rather than consumers, lenders, and investors.