And the folks who experienced the high inflation of the 1970s and early 1980s as adults expect inflation to hit 5.7% in one year.

The inflation expectations for one year from now jumped to 4.8% in June, the highest in the survey going back to June 2013, according to the New York Fed’s Survey of Consumer Expectations today. 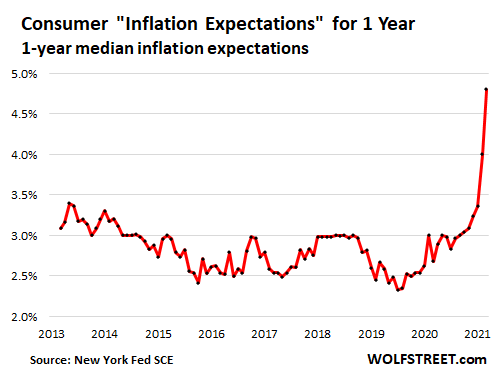 It’s that over-60 crowd that experienced as adults the high-inflation era of the 1970s and early 1980s. The younger ones have only heard about it.

According to the New York Fed’s survey, consumers expect to face these price increases over the next 12 months.

Adding up housing costs, food, gasoline, and healthcare, which for many consumers make up nearly all of their spending and which are expected to rise between 6.2% and 9.7%, it’s hard to come up with an overall inflation expectations figure of only 4.8%. But OK, we’ll cut our consumers some slack here.

Consumers expect their earnings to grow by only 2.6%, and their total household income by 3.0% over the next 12 months, even as they expect prices overall to increase by 4.8%.

This chart shows to what extent one-year inflation expectations (red) are outrunning one-year earnings growth expectations (green). If this continues to play out like this, it’s going to get tough for these consumers: 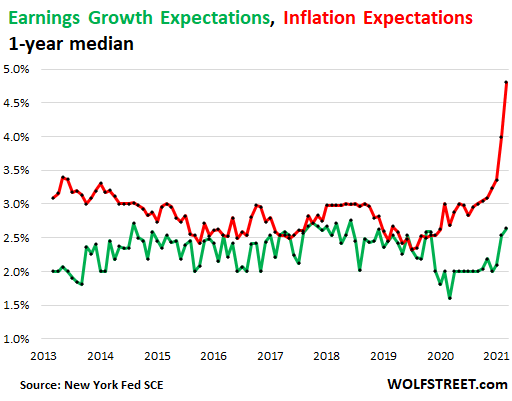 Three-year expectations have jumped, but not as much.

For now, the widely hyped messages from the Fed and the government, echoed by the major news outlets, that this bout of inflation is just “temporary” or “transitory” are resonating with consumers to some extent. 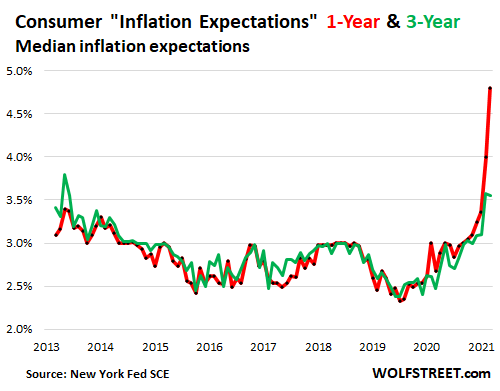 It’s these longer-term inflation expectations that the Fed is now hanging its hat on, including in the minutes from its last FOMC meeting. But the Committee is split.

On one side, “a number of participants noted that, despite increases earlier this year, measures of longer-term inflation expectations had remained in ranges that were broadly consistent with the Committee’s longer-run inflation goal.”

On the other side, “several participants expressed concern that longer-term inflation expectations might rise to inappropriate levels if elevated inflation readings persisted.”

All of them are behind the curve already. The FOMC meeting minutes also spell out the Fed’s goals: “to achieve inflation that averages 2 percent over time (per core PCE now = 3.6%) and longer-term inflation expectations that are well anchored at 2 percent (now = 3.5%).”