Yesterday, the Fed raised its interest rate on overnight reverse repos, and this morning, a giant sucking sound of cash.

The Fed sold a record $756 billion in Treasury securities this morning in exchange for cash via overnight “reverse repos.” This was up by a stunning 45% from yesterday’s operations of $521 billion. There were 68 counterparties involved. Yesterday’s overnight reverse repos had matured and unwound this morning, to be more than replaced by today’s tsunami.

During the period starting in 2014 and then abating with the Fed’s quantitative tightening in 2018, the US financial system was also creaking under a massive amount of cash following years of QE, and the Fed drained some of that cash out via reverse repos. There too were spikes, but they came at the last day of the quarter, and particularly at the end of the year.

This time, overnight reverse repos (RRPs) spiked during the quarter, and today they spiked into the stratosphere. Yesterday, the Fed had hiked the RRP offering rate to 0.05% (from 0.0%), and this morning, a giant sucking sound of cash (please forgive me, Ross). The RRP balance of $756 billion drains over six months of QE from the market: 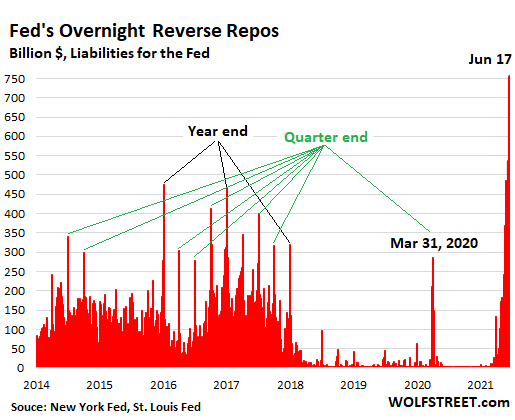 The New York Fed, which handles the overnight reverse repo trades, does not disclose which specific counterparty it dealt with today, but it has a long list of approved counterparties that include the biggest banks and broker-dealers (Primary Dealers) plus Government Sponsored Enterprises (GSEs), such as Fannie Mae, Freddie Mac, etc., and asset managers with money market funds.

They can now make a risk-free 0.05% on their excess piles of cash by handing this cash to the Fed, in exchange for Treasury securities.

Tsunami of cash a result of QE: Fed’s Assets jump past $8 trillion.

Even as the Fed was busy draining cash from the system, it continued to add cash to the system via QE. The Fed’s total assets on its balance sheet for the week through Wednesday, June 16, jumped by $112 billion from the prior week, to a new mind-bending record of $8.064 trillion.

Over the 15 months since the money-printing craziness has started, the Fed has piled an additional $3.75 trillion in assets on top of its existing mountain, and has more than doubled its assets since September 2019, when the repo market blew out and triggered a massive bailout. 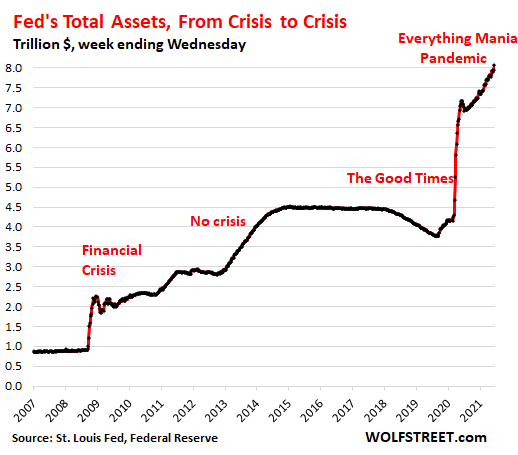 The two primary factors in the $112 billion jump in total assets over the week were:

But the government didn’t actually spend the $3 trillion in newly borrowed money. Instead, a big portion remained in its checking account, the “Treasury General Account” (TGA) at the Federal Reserve Bank of New York, which ballooned by $1.4 trillion and reached a peak of $1.8 trillion in borrowed but unspent money by July 2020.

This $1.4 trillion that the government had borrowed and that the Fed had then monetized didn’t go into the economy and the markets but sat in the government’s checking account.

The Yellen Treasury early on formalized a plan to draw down the TGA to $500 billion by the end of June. But the timeline appears to run further into the summer.

As of Wednesday, according to the Fed’s weekly balance sheet today, the TGA balance rose by $92 billion to $765 billion. $265 billion more to go: 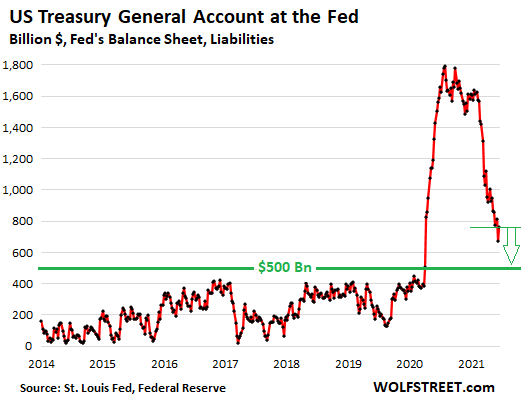 The Treasury Department draws down the TGA balance by spending more cash than it takes in through tax revenues and new debt issuance. The cash that the government thus spends was already monetized by the Fed last spring, but has been sitting in its TGA until it started entering the economy in February, when it too flooded the land with cash.

This rapid drawdown of the TGA contributed to the distortions that the Fed is now trying to mop up with its overnight reverse repos, still handing out cash via QE with one hand and mopping up cash even faster with the other hand.

With inflation hotter than it expected, the Fed is trying to slow the pace at which it’s falling further behind. Read... Fed “Had Discussion” on Tapering, Pulls Rate Hikes Closer, Raises Interest Rates on Reserves (IOER) & on Overnight Reverse Repos