In California, nearly 40,000 battery-electric vehicles (EVs) – not including plug-in hybrids – were sold in the first quarter, for a share of 8.1% of all new vehicles sold in the state, according to registration data released by the California New Car Dealers Association (CNCDA) this week. Despite the growth of EV sales, overall new vehicle sales in the state fell by 2.9% year-over-year, to 493,160 units.

Tesla’s Model Y outsold the bestselling vehicle of all times in the US overall, the F-series truck, by 6%, with 13,786 Model Ys against 12,978 F-series. Tesla’s sales in California in the quarter grew by 12.5% year-over-year, to 26,154 vehicles, according to registration data.

But Tesla lost market share within the EV space as more legacy automakers started rolling out EV models, now that they’ve gotten the memo about where growth is, with Tesla’s share falling from 70% of EVs sold in the year 2020, to 65% in Q1. EV sales are a fast-growing, increasingly large segment in the declining new-vehicle market in California: 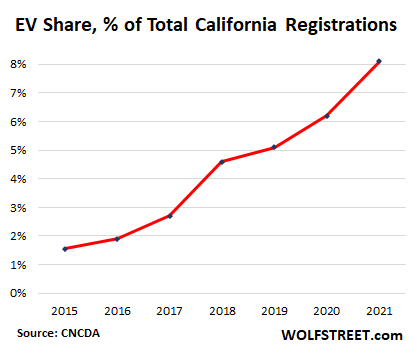 Tesla, the only automaker that manufactures vehicles in California, sold 26,154 vehicles spread over all its models, giving it a share of 5.3% of the overall new vehicle market in Q1, up from 4.6% a year ago, putting it in 6th place overall: 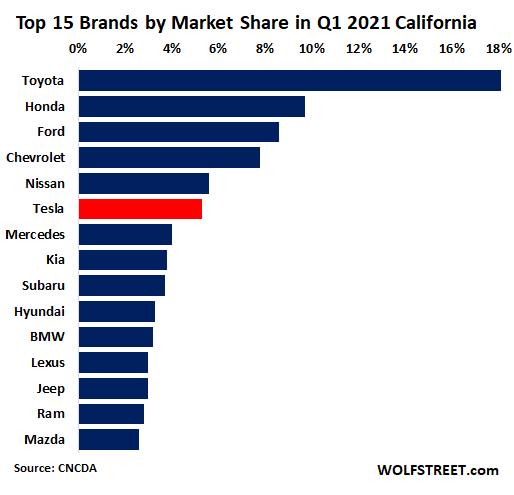 About that bestselling vehicle of all times in the US, the F-series.

Ford sold 12,978 F-series trucks in California. It has for years been the bestselling vehicle in the US, outselling cars and trucks alike, but not in California. In terms of registrations in California in Q1, the F-series was outsold by four models, three of them Toyotas plus the Tesla Model Y.

In the Top Dozen, there are four Toyota models, three Honda models, and two Tesla models (number of registrations in parentheses): 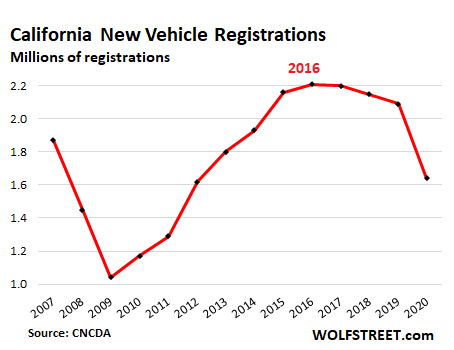 In this environment, automakers are looking for growth where they can. In terms of revenues, they’re increasing prices and switching to more expensive models and trim packages. And in terms of growth in unit sales, automakers have now discovered EVs. All major automakers already have, or soon will have, EVs on the market.

In the Near Luxury category, Tesla sold 9,731 Model 3s. BMW’s 3-Series was the runner up with 2,634 sales. In fact, Tesla sold more Model 3s in Q1 than the other four contenders in that category combined: BMW 3-Series, Lexus ES, Mercedes C-Class, and Lexus IS.

The Chevrolet Bolt, GM’s EV model from several years ago – which GM isn’t even trying hard to sell – was the number two vehicle in the despised subcompact car category with 2,839 vehicles, behind the Nissan Versa (2,995).

Later this year and next year, the legacy automakers are going to trot out more EV models across the spectrum, in larger quantities, and with larger marketing budgets. So it should be interesting how the battle for market share will shape up, whether demand for EVs can stimulate new vehicle sales in California enough to reach a new high, or whether growth continues to fizzle going forward, and it’s just a battle for share in a declining market, with EVs growing and ICE vehicles in continued decline.