Bill Gross is at it again, now retired from Janus Henderson Investors which he joined after having left Pimco, which he co-founded. But some of the things he said in his editorial in the Financial Times nailed it, and they’d be funny, if they weren’t so serious.

The long-ago deposed bond king starts out that way: “The only bond kings and queens over the past half-century since credit was unleashed from its gold standard in the early 1970s have been the US Federal Reserve chairs.”

None of the other bond kings and queens over the decades have had the sufficient firepower to really move the markets, he says. “The Fed chair with the ammunition of the global currency has been sitting on the monetary throne for the past 50 years.”

But Jerome Powell’s historic money-printing efforts to bail out every asset holder made Gross wonder if he “unleashed the potential for chaotic future economic and market outcomes.”

On top of it comes the US Treasury with its “peacetime deficits of unimaginable size,” that the Fed is now “forced to accommodate” with its monetary policies.

So this is the Incredibly Spiking US National Debt, now at $28.2 trillion, of which the Fed has purchased $5.1 trillion – over half of it since March 2020: 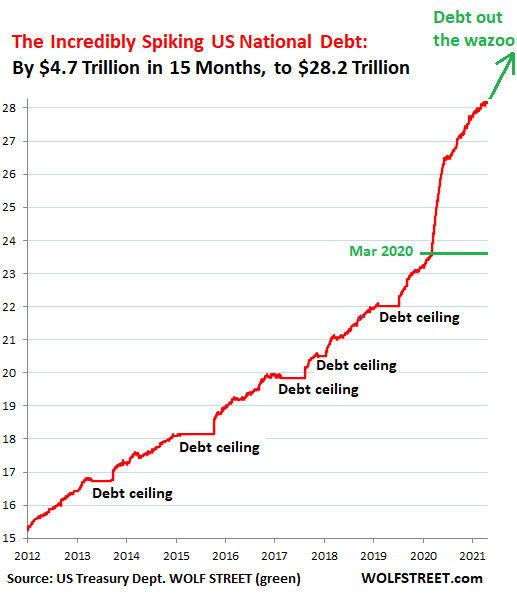 Including the other assets that the Fed has purchased, such as $2.2 trillion in MBS, total assets on the Fed’s balance sheet have exploded to $7.9 trillion: 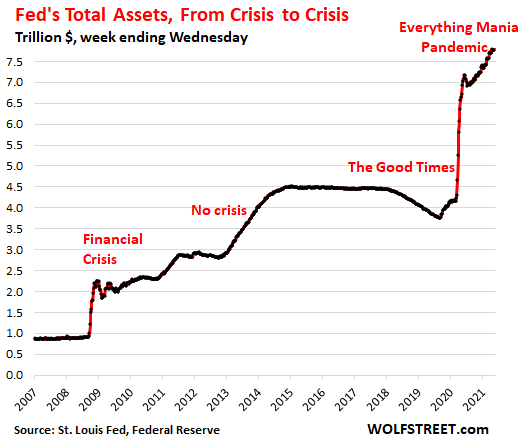 The issues are inflation and the dollar. The Fed has already said it is going to assume that inflation is “transitory,” and that it will let it rise until it decides that inflation is not transitory. The Fed’s lowest lowball measure of consumer price inflation has spiked to a three-decade high, even without the Base Effect.

The Fed also keeps saying, that if it decides that inflation is not transitory, it has the tools to crack down on it. So Gross asks, for how long will they keep their “pedal to the metal?”

“Even enthusiasts of the Fed’s policy must wonder whether hundreds of cryptocurrencies [well, I mean over 5,000] or a boom in special purpose acquisition vehicles [SPACs] are the result of continuing financial innovation or the product of cheap and plentiful credit demanded by deficit spending and an accommodating Fed chair,” Gross says.

And that question – whether this “raging mania” in just about every market, as Druckenmiller calls it, is the result of the Fed’s policies – well, “Powell will not even acknowledge asking the question about asking the question until Covid is more under control and employment returns to historical norms.”

But those historical “norms” may be out the window, given all the changes that occurred during the pandemic, including working from home, Gross says. So what is the new norm? How long can these policies by the Fed and by the US Treasury go on before “sinking the dollar?”

He walks us through the ultralow bond yields, and negative bond yields in some countries which make US Treasury securities more attractive for them. Rising inflation is producing negative real yields all around.

Given the Fed’s purchases of Treasuries at the pace of nearly $1 trillion per year – Fed chairs being the only bond kings and queens – it’s “no wonder,” Gross says, that the 10-year Treasury yield “rests illegitimately at 1.65%.”

But this may not last: These market speculations “are dependent upon the stability of the dollar and the consistency of Powell’s vow to keep short rates unchanged for the foreseeable future,” Gross says. But “at some point in the next few months, hopes for this will probably be disappointed as inflationary pressures pose increasing price risks to Treasuries and stocks too.”

The Fed’s asset purchases have already created so much liquidity, causing bank reserves to more than double in a year to $3.8 trillion, that liquidity is now going haywire, and the Fed is feverishly engaged trying to control it by selling Treasury securities and for cash via overnight reverse repos, thus draining liquidity from the market. 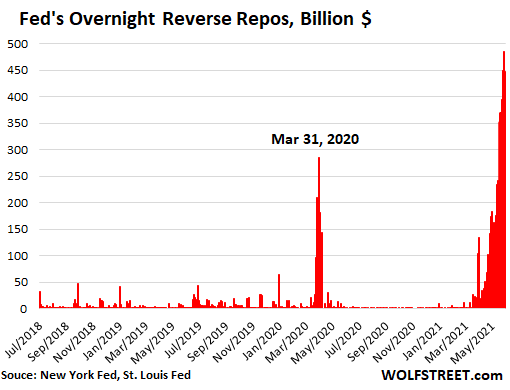 So the Fed cannot continue its current zero-interest rate policy and its asset purchases that create more bank reserves, Gross says. When the Fed starts dialing back its policies, assets that have been supported by low yields, such as the 10-year Treasury and stocks – “no matter the growth potential for 2021 and 2022,” Gross says – are in for a reckoning when they lose that support:

“Cash has been trash for years but soon it may be the only haven for investors sated beyond reasonable expectations of perpetually low yields and supportive bond kings and queens,” Gross concludes.

163 comments for ““Cash Has Been Trash for Years, But Soon it May Be the Only Haven for Investors”: Bill Gross is at it Again”