They’re not taking mass transit, that’s for sure.

Before we get into gasoline, driving, jet fuel, and flying, let’s look at what people are still not doing: They’re not commuting by mass transit. The ridership at many systems is still down 80% or 90%.

For example, ridership at the Bay Area Rapid Transit (BART) system – the trains that connect a big part of the Bay Area to San Francisco – was still down 85% in March compared to March 2019. Ridership has ticked up from the lows last spring but remains minuscule. People who have to commute in this era of working-from-home are driving. The infamous L-shaped recovery: 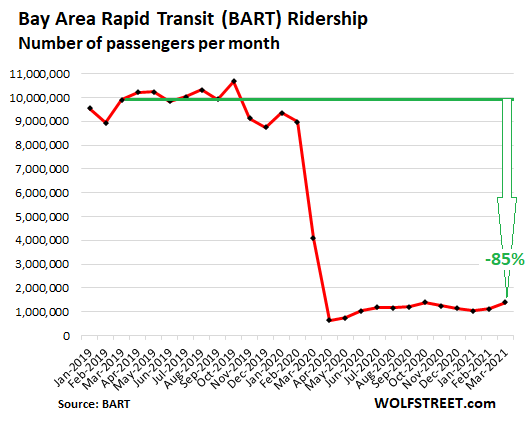 So how much are people driving?

According to the Federal Highway Administration this week, total miles driven in February on all roads and streets in the US fell to 205 billion miles, down 12% from February last year. Data for March will be available in about a month.

By comparison, during the Great Recession, total miles driven dropped for four years in a row, but only by 2.9% in total from the peak in 2007 to the trough in 2011. 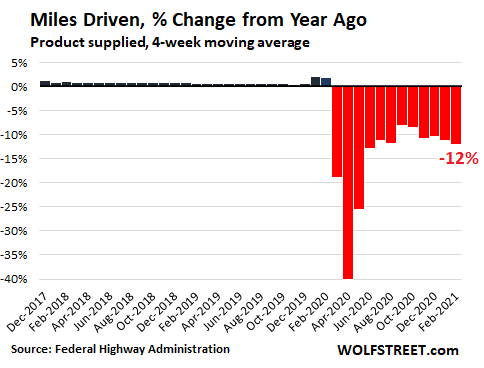 Gasoline consumption has been rising in the US from the 44%-collapse last spring. By February, gasoline consumption was down less than 12%, which roughly matches the decline in miles driven reported by the Federal Highway Administration for that month. 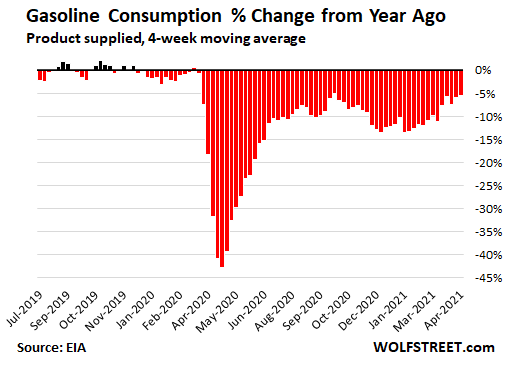 Clearly, a lot of people who used to commute to work by mass transit are now driving – and it’s easier to do because congestion is not as bad as it was before the Pandemic. And that increases gasoline consumption for those people.

The other thing we can see – and we can see the details in a moment – people are still not flying as much to go on vacation; they’re driving.

So people are commuting less due to work from home. But many of those that are commuting and that used to take mass transit, they’re now driving. And more people are driving to go on vacation. And the sum total shows up in gasoline consumption, which has almost recovered compared to two years ago. 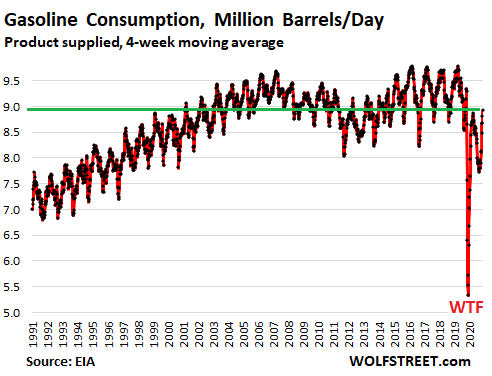 How much are people and boxes flying?

The number of air passengers that pass TSA checkpoints to enter the security zones of US airports is still down 42% from the same day in 2019, based on the seven-day moving average of daily screenings. The peaks and valleys in the chart represent calendar shifts of holidays. The most recent bump was the shift in the calendar of Easter: 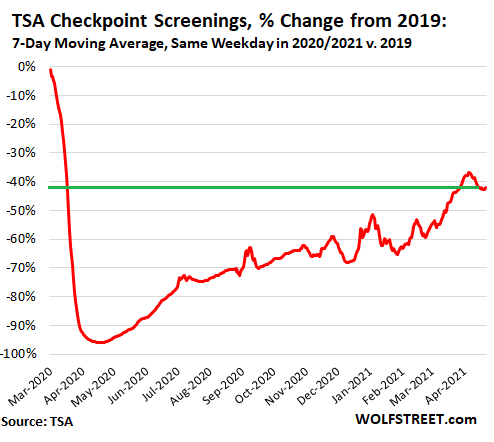 But wait… The air freight business is booming. According to the Bureau of Transportation Statistics, the top 15 US carriers transported 10% more cargo by weight in February domestically and internationally than a year earlier. The surge in air cargo volume started in June, including a 19% year-over-year increase in September: 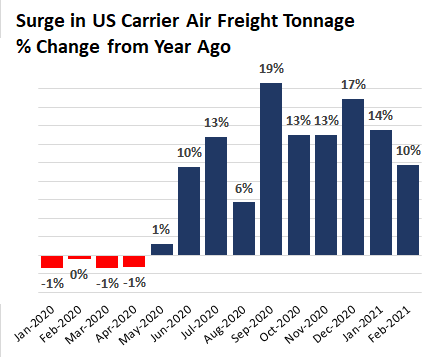 Jet fuel consumption in the four weeks through April 16, at 1.29 mb/d, was still down 25.5% from the same period two years ago. This is a mix of various factors. Airlines have been scheduling more flights as demand has picked up, but not all flights are full, and some are nearly empty. International flights are still scarce. And then there is the booming air cargo business. Despite the increase in jet fuel consumption, it remains at a three-decade low: 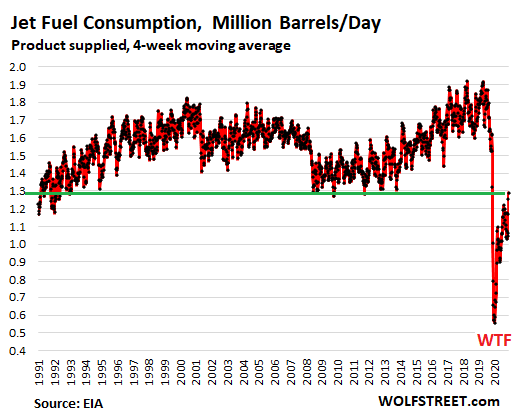 Electricity sales to all end users in the US – households, office buildings, industrial buildings, schools, and the like – have been on a dreary trajectory since 2008 for electric utilities in the US, despite economic and population growth, as these customers invested in more efficient electrical equipment and better thermal insulation, while at the same time, more manufacturing has been offshored. And then came the Pandemic. Read… Electricity Sales to End Users Dropped Below 2008 Level: What it Says about the Pandemic Economy, Households, Commercial & Industrial Activity, and Public Transportation

171 comments for “How Much Are Americans Driving and Flying Now, One Year After the WTF Collapse in Fuel Consumption?”