There is no shortage of spec homes.

The median price of new single-family houses sold in March fell by 4.4% from February, to $330,800, after having already dropped by 4.5% in February from January, and by 0.8% in January from December, for a combined three-month drop of 9.4%, the biggest three-month drop since 2009, which brought these house prices right back into the range where they’d been since 2017, unwinding the entire price spike that had started last September: 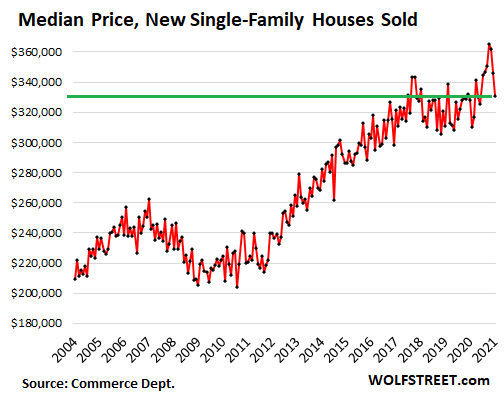 These are single-family houses that are sold by homebuilders to the public. They do not include apartments, such as condos or co-ops, in multifamily buildings sold by developers to the public. The data is gathered by the Census Bureau and the Department of Housing and Urban Development. These houses are not traded in the market place, unlike “existing” homes, which are bought and sold by homeowners and investors.

So the dynamics are different, with homebuilders trying to find the sweet spot in the market when they build the homes, throwing in free upgrades and other incentives, or even cutting prices as necessary to make deals – or raising prices if they can – and the sweet spot was at lower price points. And business there was brisk.

Sales of new homes, after the plunge during Snowmageddon in February, bounced back in March to a seasonally adjusted annual rate of 1,021,000 houses, eking past the total in January, and up 46% from March two years ago. 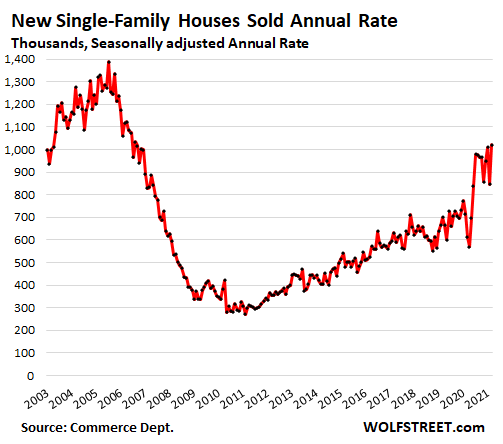 House sales remain way below the highs of the era before the Housing Bust, as a lot of housing construction since then has shifted to multi-family and often high-end condo and apartment towers in urban centers, triggering a large-scale construction boom of residential towers.

But that trend to high-rise urban centers has hit some serious rough spots during the Pandemic, when high-rise living became an iffy proposition for some folks, while houses in the suburbs or further afield jumped back into favor, starting last May – and that shift came very suddenly and brought with it all kinds of distortions.

Homebuilders are busily cranking out houses, and there are plenty of spec homes for sale – though maybe not in all the right places.

The number of unsold speculative houses (does not include houses that homebuilders built on order for a specific buyer) in March remained at 307,000 houses, seasonally adjusted, matching February, the highest since May 2020, and way up from prior years: 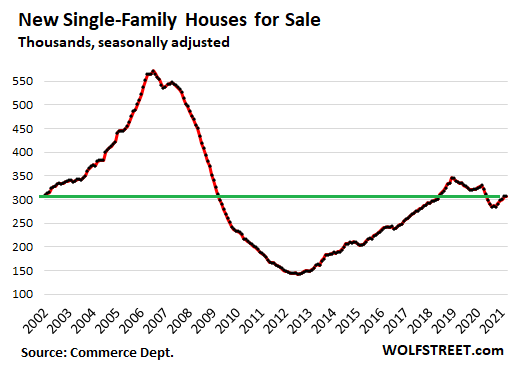 The ballooning inventory of spec homes was a massive contributor to the Housing Bust. But through 2005, the supply of spec homes was in the range of 3.5 to 4.5 months. And supply in March, at 3.6 months, is still in that range, as were the prior months: 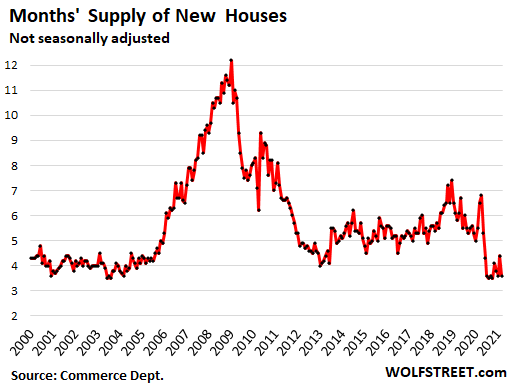 For now, the housing market is showing that the shift of the Pandemic continues, from high-rises in urban centers to single-family houses in the suburbs and further afield. There were speculations early on that this trend was a knee-jerk reaction and would soon reverse, and it may eventually reverse, because who knows, but it hasn’t happened yet, according to the data.

Amid this trend, the issues of commuting to the office are being overtaken by the issues of working from home, such as space requirements – a particular issue with couples where both used to work in an office, and now both work at home. (Marriage counseling must be booming, or is there an app for that?)

No housing market can handle the perversity of vacant homes being used as leveraged investment vehicles to generate capital gains by just sitting there. Read… Buyers’ Strike? Everyone Knows the Housing Market Has Gone Nuts: amid Wild Distortions, Prices Spike but Sales Plunge

194 comments for “Cut Prices and They Will Come? New House Sales Jump After Massive Drop in Prices”